Wrestling is a growing sport in Pakistan. Professional wrestler, Jordan Hurr, exclusively talks about his REW titles and lots more.

"Even before the fight, I saw this as a do-or-die match."

Wrestling in Pakistan is increasingly becoming popular, especially with Jordan Hurr flourishing in the sport.

The professional wrestler from Pakistan has many accomplishments, which includes becoming a triple crown champion.

Jordan Hurr was born Syed Sajjad Ali on December 7 1988, in Karachi, Pakistan. From an early age, Jordan had a wish to become a pro wrestler.

Jordan who has a Masters in Business Administration began his adventure by joining Ring of Slam (ROS) in November 2017 as a pro wrestler. This was the first wrestling platform in Pakistan.

The first-ever event he went on to compete in was under the ROS banner. Winning one match, this event took place in Altrium Mall, Karachi, Pakistan on January 21, 2018.

Jordan then had gone on to join the Pro Wrestling Federation of Pakistan (PWFP) in 2018, following the ROS split.

The first-ever title he won was the ROS World Heavyweight Championship, defeating ‘The Kovu Brandon. Karachi was the host city of this thrilling match on July 28, 2018.

For Jordan,  this title was the start of many more to come. On November 22, 2019, he won the Ultimate Championship, beating ‘Saudi Shurta’, a wrestler from Saudi Arabia.

Becoming the first person to clinch this title, this event took place in North Nazimabad, Karachi on December 28, 2019.

He also was successful in winning the PFWP World Heavyweight Championship in Karachi, in a six ladder competition. Here he beat former world-class WWE Superstars. 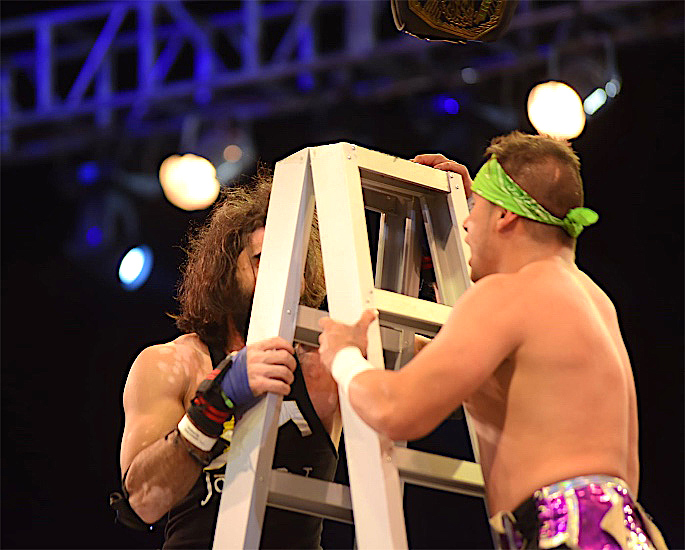 Following a year break due to the COVID-19 outbreak, he made a come back for Revolution in Eastern Wrestling (REW). This is another promotion from Pakistan.

He has had several triumphs with REW, beginning with becoming the first-ever REW Eastern Champion. He overcame ‘White Cobra’ and ‘Billu Badmash’ in a triple threat match on September 21, 2021.

His remaining titles came in 2021 in Nepal where he went to participate in an India vs Pakistan No Holds Barred match (winner takes all).

This international competition had taken place in Bhirkutimandap, Khatmandu Nepal on December 4, 2021.

There he retained his REW Eastern Championship by overcoming fellow countryman, Ahmed Boyka.

He was also champion of the first-ever REW Indian Championship for his victory over ‘Thagu Pro Wrestler’, a famous Nepali wrestler.

UWE (Ultimate Wrestling Entertainment) were the organisers of this match.

Additionally, he was victorious as the 2021 World Heavyweight Champion, after his opponent Gopal Sharma failed to show up.

In an exclusive conversation with DESIblitz, Jordan Hurr sheds light on his victories, preparations and most special moments in wrestling.

Why did Gopal Sharma run away from the 2021 REW wrestling match? 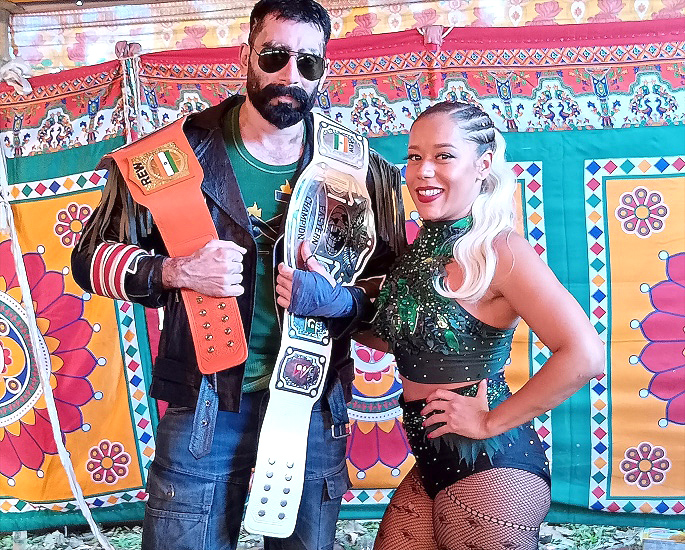 Despite Gopal being the student of the Legendary WWE Hall Of Fame wrestler, ‘The Great Khali’, he did not show up.

It’s easy to talk behind my back. However, when it comes to action my opponent should think twice that it’s not easy to defeat me as I am undefeatable.

Whereas I defeated him by forfeit and stood tall by holding my country’s pride, my flag higher in the ring. And I think that’s the biggest achievement one could ever dream of.

Representing Pakistan, how did you feel after being declared the winner?

I was representing my country Pakistan. So the victory was somewhat a surrealistic moment filled with happiness and excitement.

As it was India vs Pakistan match, being crowned the REW 2021 Heavyweight Champion became more special. Seeing the reactions of the fans after the fight also made me feel really proud.

“For me at the end of the day, it was a matter of pride to represent my country and be triumphant.”

“Even before the fight, I saw this as a do-or-die match. I did not want to let anyone down, knowing that millions of people had expectations of me.’

I must admit, it was a huge relief that I was able to fulfill this dream, beating my Indian opponent on all counts.

Tell us a little about REW and what titles have you won? 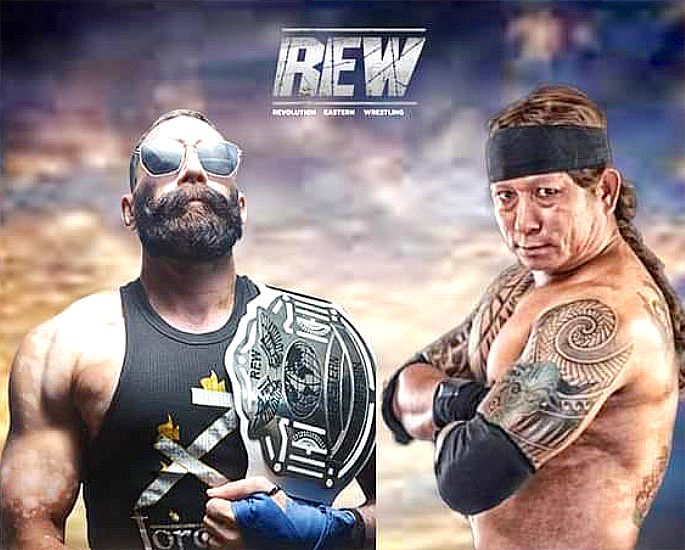 Well, Revolution in Eastern Wrestling (REW) is the fastest-growing wrestling company in Pakistan on the international wrestling circuit.

Having the best wrestlers on board, its a platform for everyone to pursue their dream of becoming a pro-wrestler. We have our own TV show where wrestling episodes are broadcast every week.

As far as my titles are concerned, I am the first-ever and 2021 REW Eastern Champion, first-ever 2021 2021 REW Indian Champion, and 20211 REW  World Heavyweight Champion.

I am the first-ever Triple Crown Champion in Pakistan’s history with the aforementioned three REW titles.

When and how did you get into wrestling?

Wrestling was always a passion for me. It was in my blood from my early childhood. It was always a dream, aim, and purpose of living to become a wrestler.

Hence, I had to get myself trained by American wrestling trainer, Williams Lou Lamont –
Founder of DFW All Pro-Wrestling in Dallas.

I took part in different hardcore matches, being declared winner in nearly all matches.

Outside of REW, what have been your biggest achievements in wrestling? 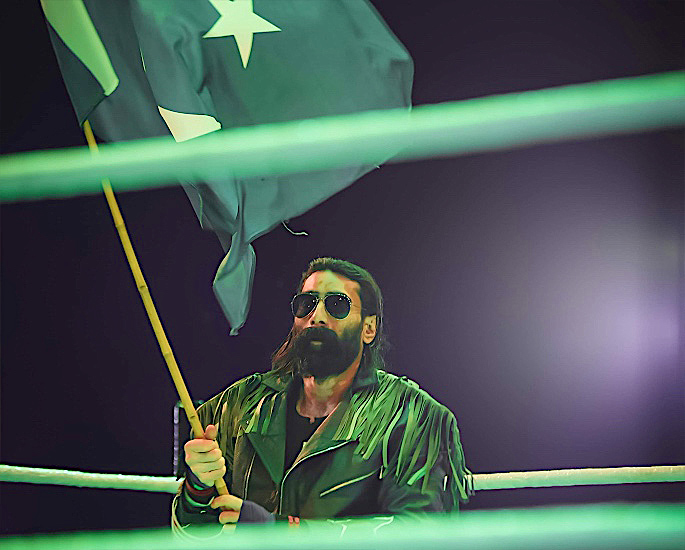 Well, I have wrestled and learned different techniques from many superstars around the globe, which has been a great honour for me.

This includes the likes of GTG, Alberto Del Rio, Rhino, and Matt Cross. My greatest moment was the six-man ladder match where I came to wrestle with some of the biggest names in the wrestling industry.

It was a happy moment for me, my fans, and my family. The crowd’s reaction to this match was awesome, which brought more joy to my victory.

What is your preparation like ahead of a big wrestling event?

For me, each match offers a different opportunity to tell a unique story. It takes me months of practice to learn, months of discourse with coaches and doctors, and months of perfecting my craft.

For this purpose, I train myself a lot because stepping into the ring requires an athletic body. It is always my intention to set a schedule for myself before any big tournament.

“I pay special attention to my diet and workouts.”

I consume five meals a day, consisting of a complex mixture of protein, carbohydrates, fibre, fats, heavy shakes along with my supplementation

My daily routine starts with having a big healthy breakfast packed with carbs, fruits, and protein.

Then the day continues with taking other healthy meals. I also hit the gym 6 days a week. ‘Eat Right, Train Right’

Besides my diet, I have an insane workout routine that includes weight lifting, strength and weight training, cardio, crossfit, and muscle training.

Why is it important to partly script a wrestling event? 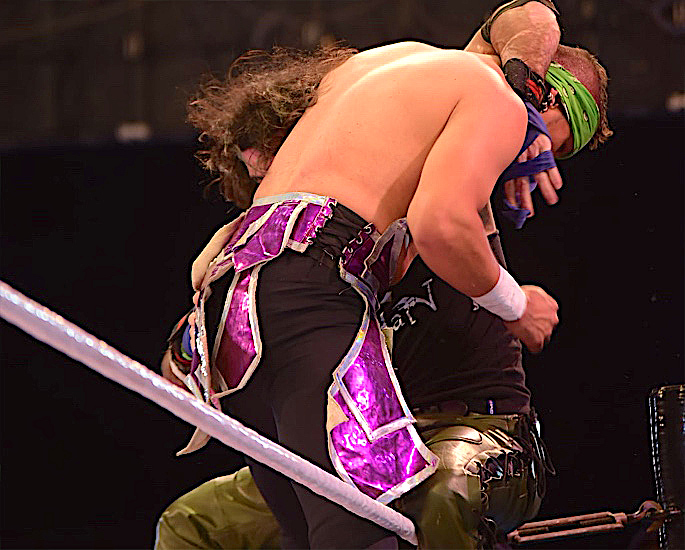 As you can appreciate Pro Wrestling is not only a sport it’s entertainment as well. If we just perform matches without any storylines, backstage moments, mic grudges, people will get easily bored.

So for entertainment purposes and to indulge viewers’ attention from start to end, scriptwriting is important.

Although sometimes superstars go off the script and do what the fans actually want to see, which is quite entertaining as well.

Basically, script-writing is necessary to put on an entertaining match as much as possible.

What are your signature moves and finishes?

My signature move is ‘PlayMaker’ and the final move is a submission, namely, ‘Sharp Shooter’. Defining ‘Play Maker’, it is a version of a swinging neck breaker where I use a leg rather than hands to perform the twist.

Here my opponent is bent forwards, spun around, with his neck landing inside of my knee. It’s basically a neck breaker, which focuses the attack on my opponent’s neck.

The ‘Sharp Shooter’ is my submission hold. This hold begins with my opponent’s spine on the mat.

I wrap my opponent’s legs and cross them over with my hands. Then I place my opponent on their back in the centre of the ring.

“I make sure that my opponent is far from the ropes so that I can make the submission hold more believable.”

This also makes it difficult for my opponent to grab the ropes to break the hold.

Then I lift my opponent’s legs by gripping the arches of their feet. I take each foot in my hand and hold them about waist level.

I step through with my dominant leg, pacing my right foot on the mat next to my opponent’s abdomen and then I continue holding on to his feet

Then I cross my opponent’s leg around my leg and tuck the right ankle in my armpits. Finally, I roll my opponent over by stepping across.

How did ‘The Sharp Shooter’ and your name come about? 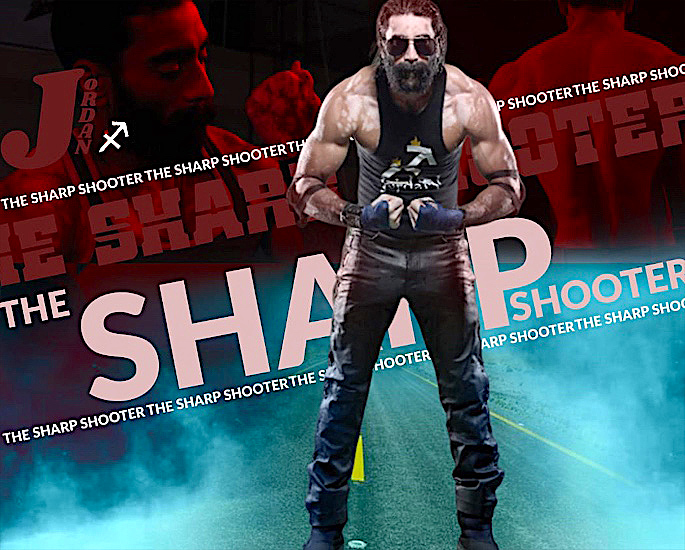 Well, it’s quite a secret. There has always been a question about my ring name, Jordan. People always ask me where does the name, ‘Jordan’ come from.

Well, I am not planning to reveal it soon but yes in the near future, I will definitely tell the secret behind my ring name. So, my fans just have to stay connected with me.

But I want to put some light on my surname, ‘Hurr’. It takes inspiration from one of the best warriors in History. He was one of the high-ranking commanders of the army.

My name ‘Hurr’ means free, free-born, noble, a free man. This is the name that has made a provocative mark on history. Similarly to this Legend, I want to follow his footprints.

I want to make myself the biggest name in the history of Pakistan Professional Wrestling. My name Jordan Hurr reflects bravery & self-confidence. I am the man who deals with danger and fear without flinching.

I am a fearless person and a man who many respect. My character gives me a certain versatility to take on superstars all over the spectrum of good and evil.

Finally, what are your ambitions in wrestling?

As a Pakistani pro wrestler, I dearly want to see my country’s name, Pakistan, at the top of the world wrestling globe.

I want bigger wrestling events and matches to be organised over here where wrestlers from all around the world can come to participate in them.

I also want my people to show a lot of support and love for this sport, which can further grow. Despite the high risks, as a Pakistani pro wrestler, I want to encourage my people to take up this sport.

Major companies like WWE have a main diverse roster, as well as opening the door for many markets globally.

So I would like to see Pakistan on that platform too where wrestling opens the gate to exciting markets. I have been performing for over 4 years and I have already made a significant impact.

“I am a huge name in Pakistani professional wrestling. No one can stop me from rising.”

Meanwhile, I remain focused on refining my skills and raising my profile of pro wrestling not only in South Asia but also all around the world. 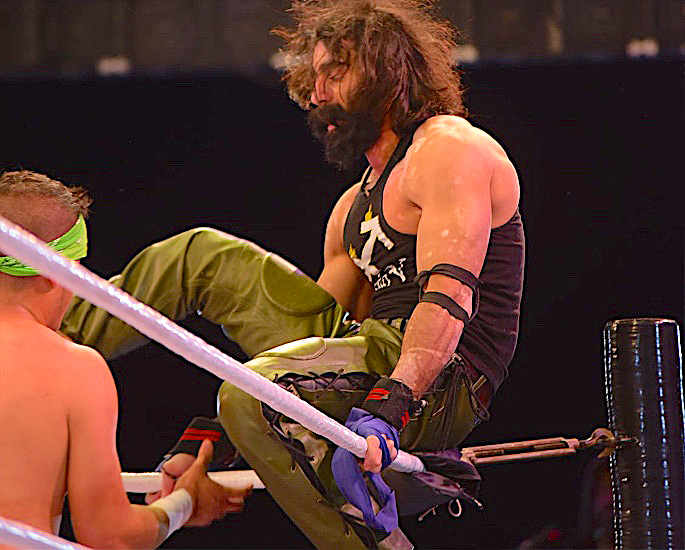 In recognition of his REW glory, Jordan Hurr was honoured with a Pride of Pakistan Award at the 2021 GFS Builders & Developers Awards in Karachi, Pakistan.

Besides wrestling, Jordan is also a professional bodybuilder, claiming many medals and winning many competitions in the sport.

Outside of sport, he is a Business Development Manager, working in the ‘City of Lights, Karachi.

His employment portfolio includes working for Satcomm Private Limited. This is one of the largest internet service provider companies in Pakistan.

Jordan Hurr is working with REW on some big projects ahead with even bigger events worldwide in the pipeline.