A statue of Cristiano Ronaldo has been unveiled in India, however, the new statue has left people divided.

"This is nothing but to inspire our youth."

A new statue of Cristiano Ronaldo in India has divided fans.

The Manchester United legend was honoured with a gold statue in the town of Calangute, Goa.

It is reported that the statue has been created to inspire the next generation of footballers in the country.

“This is for the first time that the statue of Cristiano Ronaldo has come up in India.

“This is nothing but to inspire our youth.

“If you want to take football to another level, then this is what young boys and girls will look forward to, taking selfies and looking at the statue and getting inspired to play.

“We need a good infrastructure for our boys and girls to go there and play.

“The statue is just to inspire. We want good infrastructure from the government. We need coaches who can train our boys and girls.

“Government should appoint former players as coaches, who played for Goa and made India proud.

“In this way only, we can move ahead in the field of sports. Being such a big country, we are far behind many countries in terms of football.” 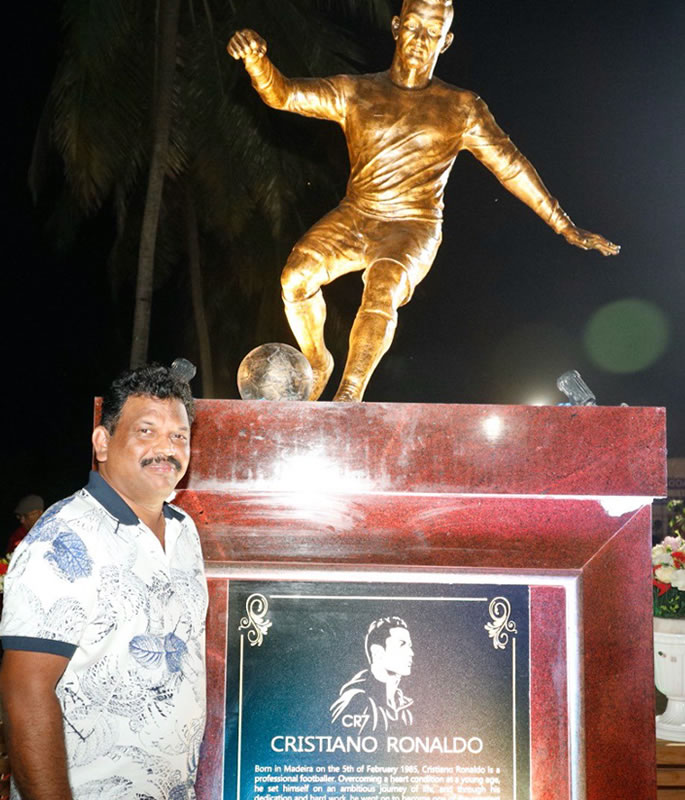 Many people lauded the statue.

One person wrote: “Our love for Cristiano.”

Another commented: “A living icon.”

However, some people are against the statue, with some waving black flags next to it.

Calangute constituency forum president Premanand Divkar believes local footballers should have been honoured instead of Ronaldo.

He said: “There are so many great footballers from Calangute like Bruno Coutinho and Yolanda D’Souza, who have brought laurels to India by playing football at international level.

“Why couldn’t their statues be installed? They are from Calangute.”

“Why the Portuguese footballer’s statue has been installed.”

Another person said: “Very disappointed to hear of the statue of Ronaldo being erected.

“Learn to take pride in our own icons like Samir Naik and Bruno Coutinho.”

Others pointed out that Goa used to be a Portuguese colony.

“To erect a statue of a Portuguese footballer this year is sacrilegious. We condemn this.

“There are many freedom fighters in Goa who have been insulted.”

One person said: “Sunil Chhetri is also inspiring youth and he takes football to the next level in India.”

The statue has taken three years to construct due to delays caused by the Covid-19 pandemic.

Dhiren is a journalism graduate with a passion for gaming, watching films and sports. He also enjoys cooking from time to time. His motto is to “Live life one day at a time.”
Jordan Hurr on Revolution in Eastern Wrestling & Journey
12 Top Super Rising Pakistani Snooker Players