Cueists from Pakistan have a strong platform to showcase their skills. We unveil 12 promising Pakistani snooker players to keep an eye on.

"His stance and firm cue action is nice and smooth."

With cue sports popularity increasing in Pakistan, many Pakistani snooker players are emerging.

Many of these cueists have the advantage of playing on the Pro Snooker PK Tour – a brainchild of pioneer Shoaib Arif.

It is great to see that Pakistani snooker players are reflective of the key provinces and areas under Pakistan’s governance.

Players are coming from Punjab, Sindh, Balochistan, and Azaad Kashmir. The city of Lahore in particular is a game-changer in producing the finest of talents.

This includes players with some experience as well as raw proteges, making a move for the bigger picture.

We spotlight 12 exciting Pakistani snooker players to watch out for, with some exclusive reactions. 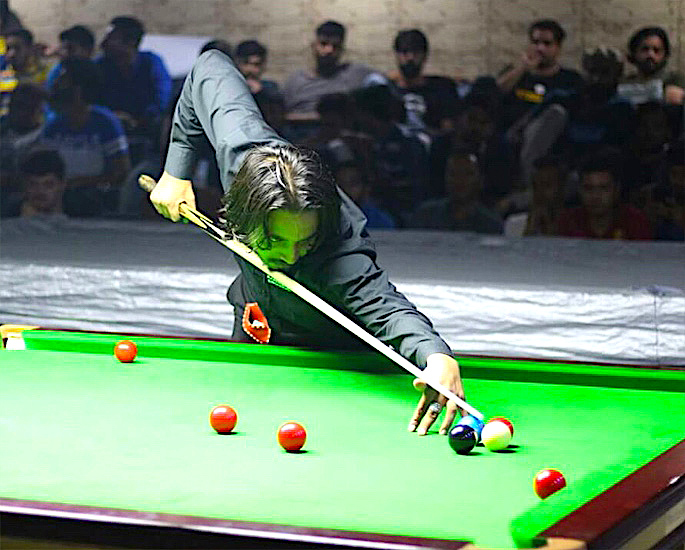 Awaisullah Muneer is one of the most successful Pakistani snooker players, having raised many trophies. The right-hand snooker cueist was born in Lahore, Punjab, Pakistan on February 23, 1993.

He is a Lahore team player on the Pro Snooker PK Tour. Famously known by the nickname, Mithu Jutt, he made his debut when seven years old at Malik Snooker Club, Lahore.

At the same club, whilst in practice mode, he accomplished his first 147 feat. In 2019, he repeated the same versus Haris Tahir at the Fighters Arena Snooker Club, Lahore.

He has made multiple 147’s, over the years on the snooker table. Awaisullah has a staggering 500 plus practice century breaks.

He is the 2018 Snooker Shoot-Out Champion in Pro Snooker, beating Mubashir Raza in the final.

He has one fastest clearance in the Shoot-Out. Trailing by 52 points, he won by 56 points by clearing the balls in 1 minute and 47 seconds.

Awaisullah is also six times Pakistan Open champion, stamping his authority on the game at the national level. 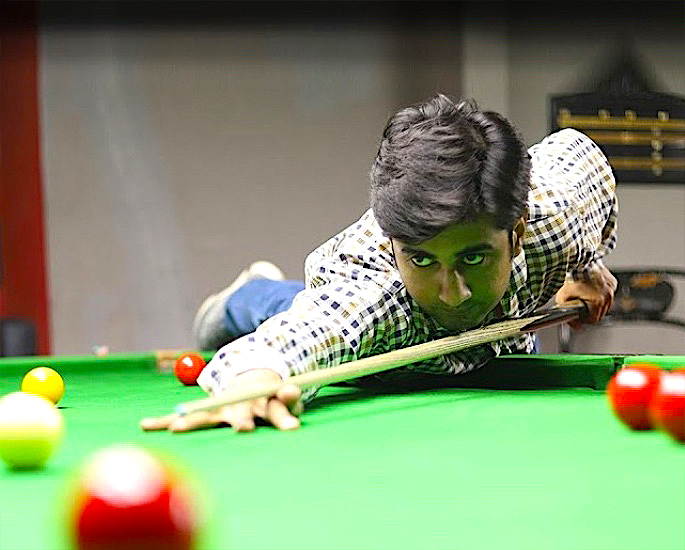 Muhammad Haris Nadeem is a snooker player who has had success from his home province.

The left-hand snooker player was born in Karachi, Sindh on October 2, 1993. Nadeem made his debut in 2010, playing at Time 2 Snooker Parlour in Karachi.

It was at Addy’s Snooker Club in Karachi that he made his first century break. He has more than 60-century practice breaks under his name.

He has made the magnificent 147 break in 2016 at the North Karachi Gymkhana Club. Speaking about how he overcame his nerves to complete the break Haris said:

“It was a pressure moment on the colours. I stuck to my technique, taking my time on each shot.

“After potting the final black, I felt on top of the world.”

Nadeem likes to challenge himself, with his favourite shot being the stun run-through. 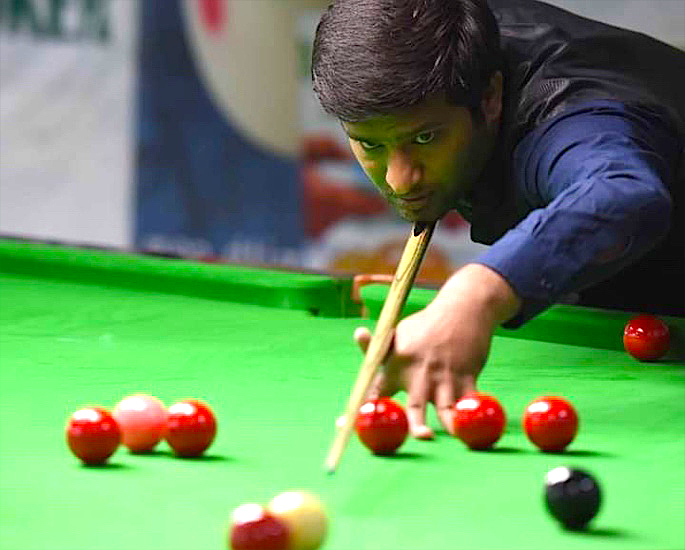 Mubashir Raza is amongst record-breaking Pakistani snooker players from Pakistan. The right-hand cueist was born in Lahore, Punjab, Pakistan, on April 22, 1994.

The player who represents Team Lahore on the Pro Snooker PK Tour made his debut in 2015 at the age of fifteen.

Mubashir has two nicknames, namely ‘bichoo’ (scorpion) and Mr 147. A break of 115 was his first century made at PAK Snooker Club in 2010.

He made his maiden 147 break during a practice session at Champion Snooker Club, Lahore. The multiple 147 break builder holds the record for two consecutive maximums.

As a pioneer, he also made history when he cleared the balls for yet another 147 at the Pro Snooker PK mega team event against Karachi player Shadab Baig.

In practice, he has a mammoth 2000 plus century breaks, which is absolutely amazing. He has many accolades to his name. This includes being a multiple Pakistan Open Champion.

His favourite shot is from potting the yellow to positioning for the green. His preferential pocket is the one left to the black ball. 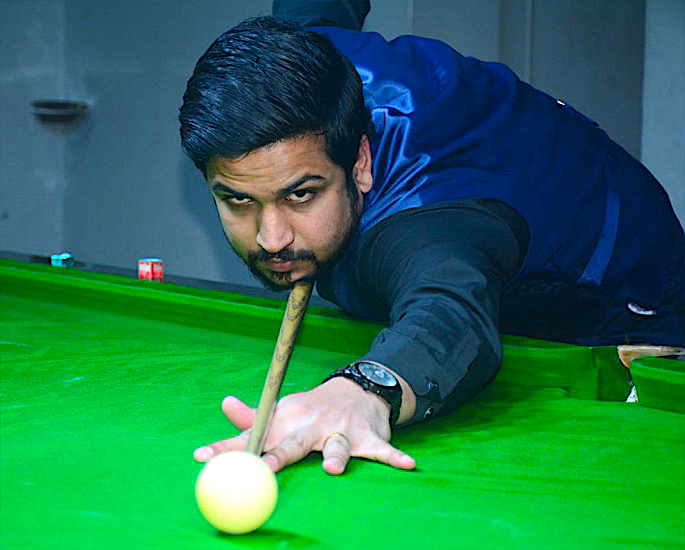 Muhammad Saqib is a good national-level snooker player that can build on his game. The right-hand cueist was born in Gujranwala, Punjab, Pakistan on February 4, 1998.

Familiar with the nickname of Hafiz Hassan, Saqib made his debut in 2010 at Batala Snooker, Peoples Colony, Gujranwala.

Under the Pro Snooker PK Tour, he plays for the professional sports team, Gujranwala Shooter.

His first-century break came in in 2014 during practice at the Red to Black Snooker Club, Gujranwala. He has accumulated more than 200 practice session centuries.

He went onto to claim his first major win, by becoming the 2016 Under-21 National Champion.

Saqib is comfortable with a frame where he can build a break. Long potting and the middle pocket shots are his amongst his favourites. 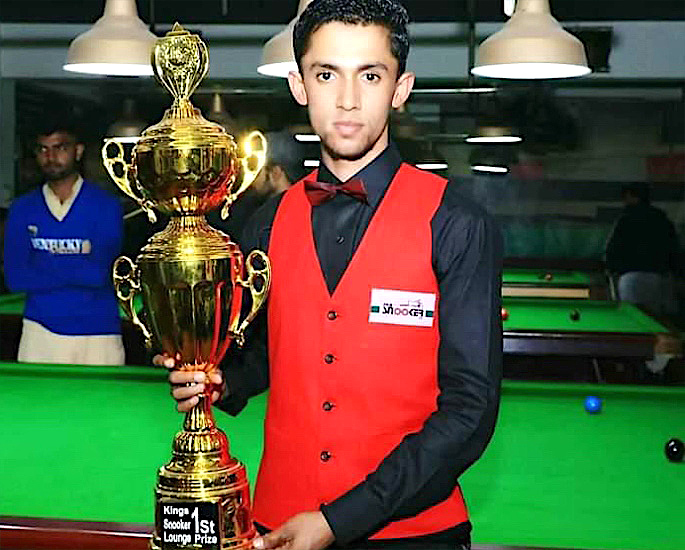 Muhammad Saleem is amongst the most skillful Pakistani snooker players on the circuit. The right-hand cueist was born in Vehari, Punjab, Pakistan on February 6, 1998.

Being able to play with his left hand also has earned him the nickname of ‘The Magician’. He is an Islamabad Thunders player as part of the Pro Snooker PK Tour.

A break of 110 was his first century at the Champion Snooker Club in Lahore.

He made a mesmerising 147 for the first time in 2020 versus Qamar Khan at Pakistan Snooker Lounge in Rawalpindi.

Saleem has more than 140-century breaks during practice play. In 2013, he won his first title, winning the 2012 Dadyal Red Championship.

He defeated Zubair Gujjar in the best of seven frames match by 4-2. During a frame, Saleem likes to pot the blue and go in the pack. The long bottom-left hand pocket is also his favourite. 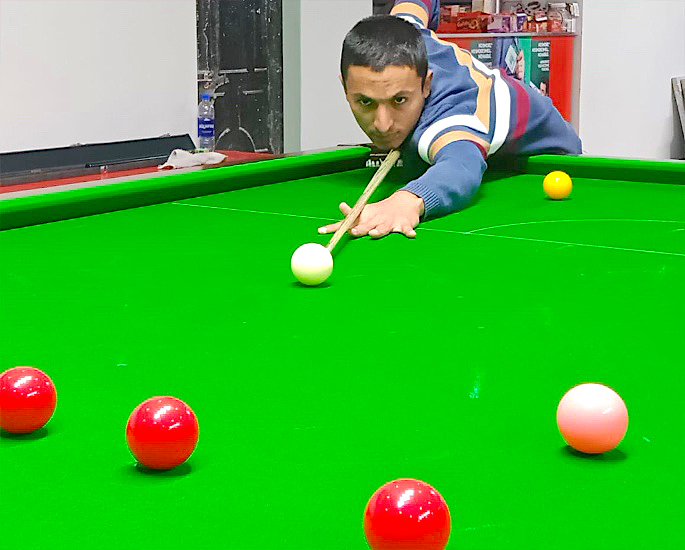 Muhammad Shahbaz also known as Shahbaz (Khandu) is a Pakistani talent in the snooker arena. The right-handed cueist was born in Multan, Punjab, Pakistan on October 10, 1998.

After making his debut in 2012, three years later, he made a first-century break against Professor Noman at Stingfellow Snooker Club, Multan.

In 2018, he made the illustrious 147 clearance during practice at the same club. The Multani player has 20 plus tournament and over 50 practice century breaks.

By narrowly edging Haris Tahir 5-4, he became the 2016 Under-17 Punjab champion – registering his first notable title.

In the final, his long potting was good, which included two breaks of 50 plus. Reflecting back to this win, Shahbaz told us:

“I was happy to win the Punjab title, with it being my first big tournament.”

Shahbaz relishes playing every cushion shot one can place on the snooker table. 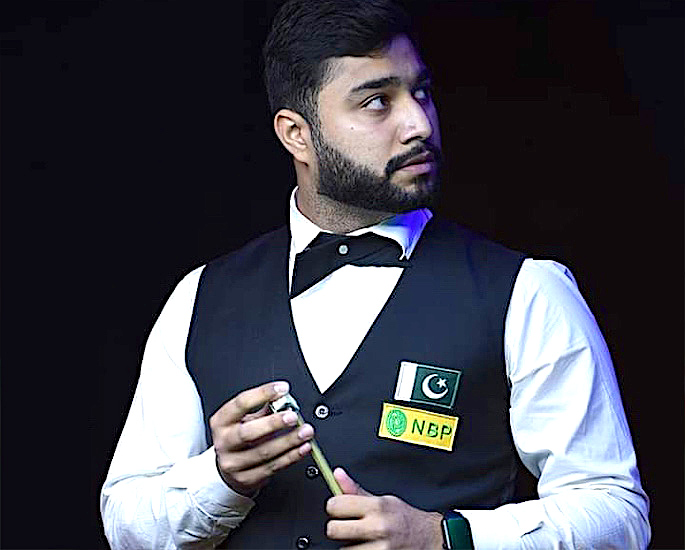 Haris Tahir is one of those Pakistani snooker players with many accomplishments at a young age. The right-hand cueist was born on April 9, 2000, in Lahore, Punjab, Pakistan.

Making his debut at the age of fourteen, he goes by the nickname, of Mr One Visit. This is due to him being good at converting his chances.

He represents his hometown under Pro Snooker PK. Haris has over 100-century breaks in tournament play. He also has more than 150-century breaks during practice sessions.

His 105 in 2014 against Azhar Khan at Karrock Snooker Lahore was his first-ever century break. He made his 147 at Imran Shahzad Snooker Club Lahore in 2015.

At the state level, he was the 2018 Punjab Champion. He went on to clinch gold at the 2020 Under-21 National Championship.

In addition, he has several medals at the international level. He loves playing the cushion shot below the black as well as playing a long blue in either four pockets.

Furthermore, he has potted 750 consecutive blacks, which is the most in Pakistan. 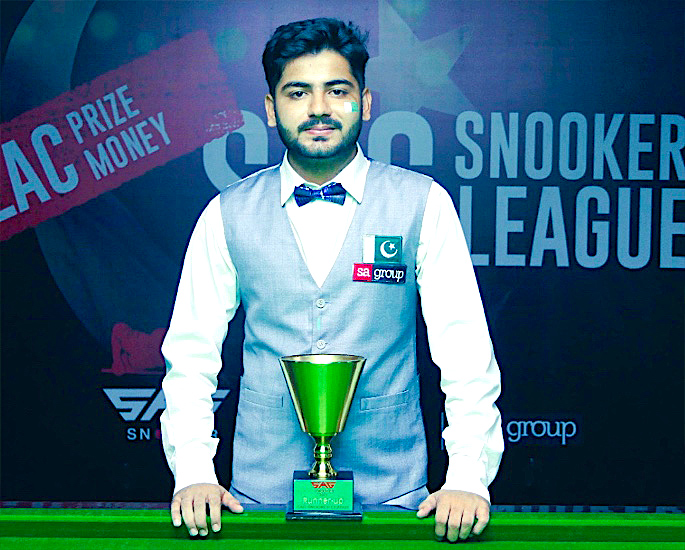 Naseem Akhtar is an immense snooker talent from Pakistan who has already made an impact on the global scale.

The right-hand cueist was born in Sahiwal, Punjab, Pakistan on January 7, 2001.

Naseem who made his debut at the age of eleven is a Lahore Team professional player under the Pro Snooker PK Tour.

It was at City Snooker Club, Fateh Shah Market, Sahiwal that Naseem made his maiden century break.

At the same club, he made a fantastic first 147 break in 2012. He won his first title in 2012, becoming Sahiwal champion after beating Afzal Baba.

He was victorious against Piefan Lei (CHN) 5-3 in the final played in Beijing, China.

Naseem’s favourite shot is playing a long blue in either of the four top and bottom pockets. 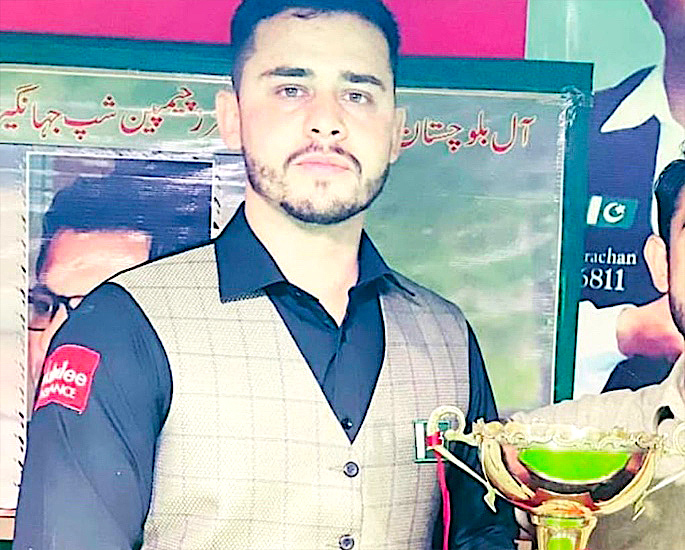 Adil is a snooker player who has made inroads at the provincial level in Pakistan.

The right-hand cueist was born in Quetta, Balochistan, Pakistan on January 1, 2002. Known as the ‘Balochistan Rocket’, Adil made his debut in the year 2014.

He completed his first-century break against Sunny in 2016 at the Taj Mahal Snooker Club. He also has a 147 break, made at Jahangir Snooker Club in 2017.

Adil has made over 95-century breaks – be it during practice play. He is the first All Balochistan Snooker Championship 2017 winner.

He won this title after beating Gafoor Kakar 5-2 in the final of this event. Adil loves to pot a long blue in either of the four upper and lower pockets.

Adil firmly has his feet on the ground, but has short term and long term goals:

“I want to win the Pakistan National Championship first, and then look at securing global tittles.

Adil is an extremely aggressive player who has an average shot time of six-seven seconds. 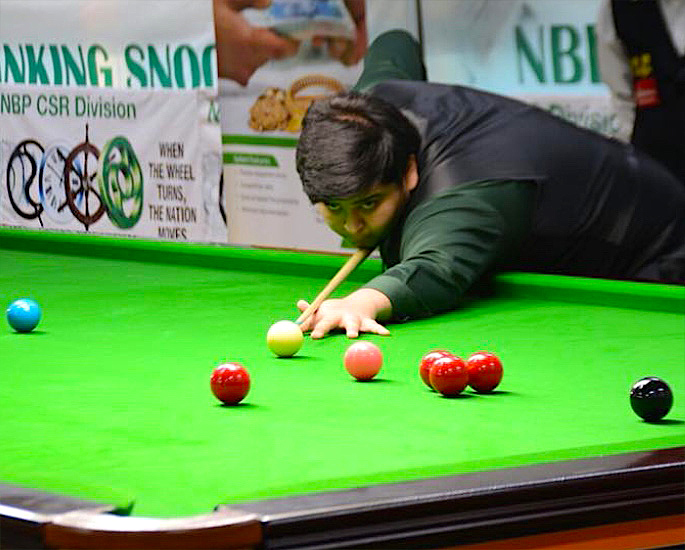 Umar Khan is a national and state winner who can develop his game further.

The right-hand cueist was born in Lahore, Punjab, Pakistan on August 26, 2002. When Umar first began playing, he was also a natural with his left hand.

After turning ten, he picked the cue for the first time at Karrocks Snooker Zone, Sodhiwal, Lahore, Pakistan. He made his snooker debut in 2013.

Umar plays for Lahore Tiger as part of the Pro Snooker PK Tour. He already has more than 200 practice century breaks under his belt.

He notched up his first-century break in 2017 versus Haris Tahir at Karrocks Snooker, Wapda Town, Lahore.

In the same year, he also achieved the maximum 147 at the same club where he made his first century break.

His first title was clinching the 2018 Under-18 Punjab Cup, overcoming Shahzaib Malik 4-2. The same year, he went on to become the winner of the National Under-18 Championship.

His favourite shot is a long pot with deep screw, and prefers a frame consisting of break building. 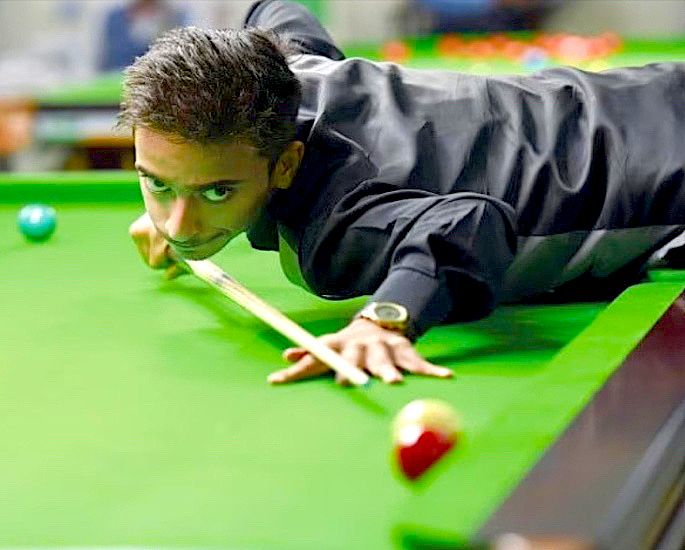 Ahsan Ramzan is amongst the best rookie Pakistani snooker players on the green baize.

The right-hand cueist was also born on August 14, 2005, in Lahore, Punjab, Pakistan. His birthday falls on the Independence Day of Pakistan.

Ahsan’s debut came in 2011, playing on a snooker table at his home. In practice, he has 200 plus century breaks. He also has over 25-century breaks during different tournaments.

He had made the magical 147 in 2019, during practice at Good Shot Snooker Club, Township, Lahore.

His first official title came in 2019, becoming the under-16 champion after beating Zubair Tahir from Multan 5-0. This match took place at Islamabad Sports Complex.

Ahsan is confident playing his long game, often potting balls from a distance. Ahsan has the potential to go far, by maintaining form and developing his game further.

Muhammed Hamza Ilyas is one of the most promising Pakistani snooker players.

The right-hand cueist was born in Lahore, Punjab, Pakistan on August 20, 2005. He made his debut in 2016 at the age of eleven at Champion Snooker Club, Johar Town, Lahore.

In 2019, he made his maiden century break at Cross Guns Snooker Club, Defence, Lahore. He completed his first 147 break at the same club, also in 2019.

Hamza has made over 50-century breaks when playing under practice mode.

“His stance and firm cue action is exceptionally smooth. His dedication also stands out, especially as he wants to perform in every frame and match.”

He became the 2019 Under-16 National champion after demolishing Kamran Albert 4-0. He also narrowly beat Mithu Jutt 5-4 in the 2021 Lahore Cup.

It was a remarkable win against Mithu, considering he was behind 4-3 at one stage.

There are several other talented and experienced snooker players from Pakistan who can play at the highest level.

Some of these Pakistani snooker players will compete at Q-School, aiming to join the main professional snooker tour. Hence, as they say, if you perform, then the world is your oyster.

The players can take inspiration from other Pakistani snooker players such as Shokat Ali, Farakh Ajaib and Hamza Akbar.