Who won the first Snooker Gold Medal in Cue Sports?

Shokat Ali made history by becoming the first snooker player to win a gold medal at a major games. Ali exclusively spoke to us about the famous victory.

“I think as a player, all you want to do is to win the gold."

Shokat Ali wrote his name in history after he became the first snooker star to win a cue sports gold medal at the 1998 Asian Games.

The English snooker player of Pakistani descent was born in Accrington on March 4, 1970. Similar to most British Asian families, Ali’s parents also discouraged him.

But with snooker being very popular, Ali had his mind on the sport:

“Snooker was very big when I was young. I wanted to be a professional snooker player.

“Every minute I had, I used to think about snooker. And you could not get me off the table. Basically its dedication, and I really wanted it.”

He became a professional snooker player in 1991, remaining on the circuit until 2007.

Ali was ranked inside the top sixty-four when he competed at the Asian Games. Going for gold in the singles, this discipline featured big names from the world of snooker.

He won a testing final against Sam Chong (MAS) to claim the first gold for Pakistan at the multi-sports event in Thailand.

Let’s take a closer look at his gold medal-winning campaign and an exclusive reaction from the former snooker star. 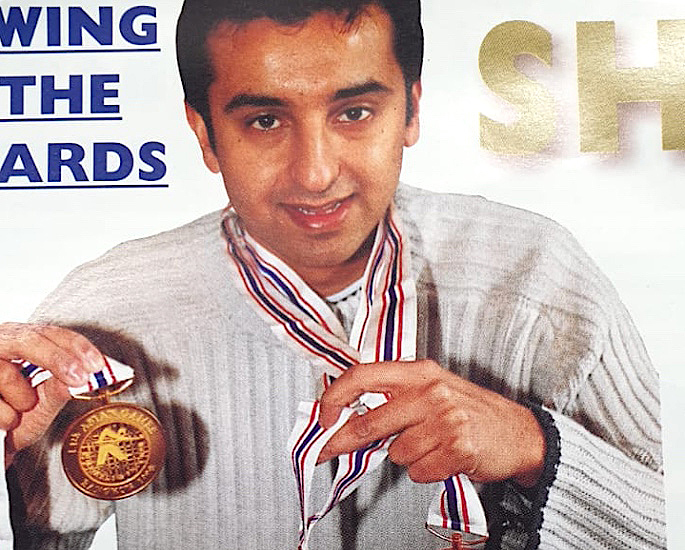 Shokat Ali made history when he became the first man in snooker to win a gold medal in cue sports at a world competition.

Ali was approached by the snooker governing body of Pakistan. Although Ali was born in England, he had lived in Pakistan for some years. He was a dual national, holding a Pakistani passport.

Representing Pakistan, Ali achieved this amazing feat at the Asian Games that took place in Bangkok, Thailand between December 6-8, 1998.

His quest for gold saw him winning five matches on the trot at the Land Sports Complex. Ali was in the bottom half of the draw, specifically in section 4.

Courtesy of being ranked 49 in the world, he did not have to play in the first round of the tournament.

He had a gruelling test in the second against Marlon Manalo from the Philippines, beating him 5-4 in a very close game. His knowledge and experience paid dividends in this match.

In a third-round pressure match, he saw off Indian arch-rival Alok Kumar 5-3 in the best of nine frames.

He then comfortably defeated Keith E Boon of Singapore 5-2 in the quarter-finals.

The final on December 8, 1998, was a nail-biting game, which could have gone either way.

Ali had to dig deep to be triumphant in the best of 13 frames match. He came back from 4-1 down to win six of the remaining eight frames.

Ali accomplished his gold medal dream after winning 7-6 against Sam Chong ranked 186 in the world.

This was one of two gold medals which Pakistan won at the 13th Asian Games, making it even more special.

This was a great achievement by Ali, considering that the tournament also featured the likes snooker talents James Wattana (THA) and Marco Fu (HKG).

The Prince of Malaysia was in attendance to witness this snooker battle. 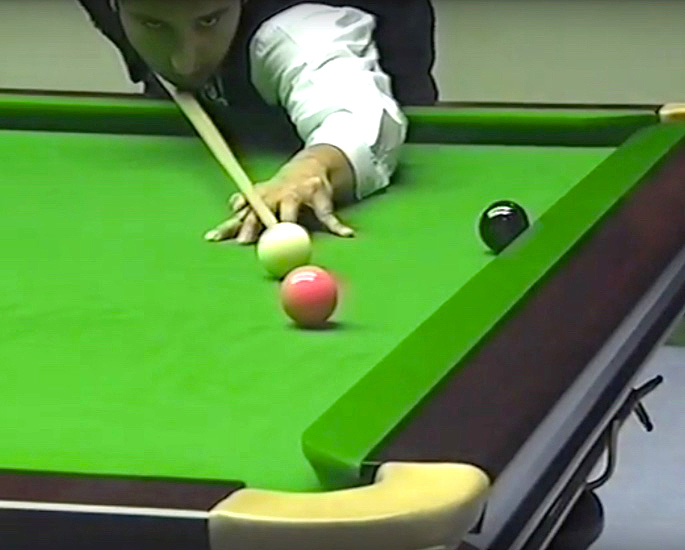 Reaction from Shokat Ali and Analysis 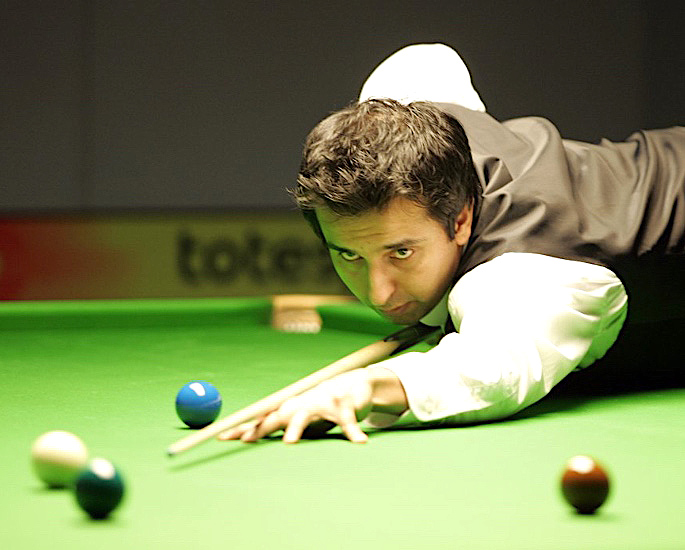 Ali stated he had issues with his cue, which is one of the reasons why the earlier round match against Manalo went to a final frame decider:

“I had problems with my cue before I flew out.”

Ali revealed he always had his eyes set on gold, especially when getting to the latter stages of the competition:

“I think as a player, all you want to do is to win the gold. And if you don’t win the gold, it is a bit disheartening. So I did not really want to miss the opportunity.

“I remember playing Sam Chong and none of us really played any decent snooker, because of the conditions.”

The conditions were definitely hard and not like modern times, where the tables play much faster, enabling more bigger breaks. Hence, with both players trying extra hard, the snooker was not as attractive.

According to Ali, it was a big weight off his shoulders when he actually won as it had a big impact:

“It was just a relief. It was nice to win. And then obviously once I won, everything sinks in – how important it was at the time for Pakistan and even the snooker world in Asia.”

For many, it remains a big achievement because Ali was the first man to win gold in snooker at a major games. Gold medallists of subsequent Asian Games did not receive the same limelight as he did.

Ali came back home with three other medals. He also won a bronze medal for Pakistan with Saleh Mohammad in the doubles.

Additionally, he won another bronze for Pakistan in the snooker team competition. His teammates included Farhan Mirza and Saleh Mohammad.

Ali tells us his family were over the moon with the victorious outcome.

The Pakistan government awarded him the Tamgha-i-Imtiaz for his outstanding performance at the games. He was honoured by the Pakistan High Commission in London.

Whilst the 1998 Asian Games final was the victory of his life, Ali did attain other achievements in the game.

Enroute to the 2001 Thailand Masters quarter-finals, he beat the ‘Rocket’ Ronnie O’ Sullivan 5-4 in the second round.

At the peak of his career, he reached as high as 34 in the world rankings. He made 29-century breaks, with his highest being 139 during a qualifying match of the 2001 Thailand Masters. 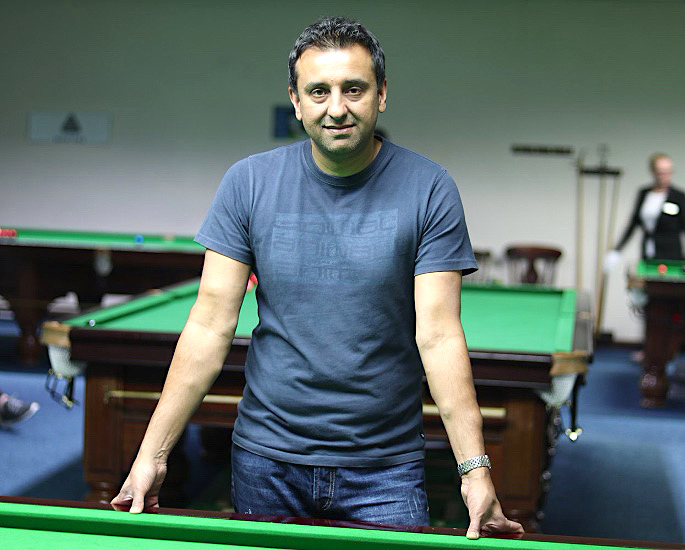 Unfortunately in 2005, Ali’s history-making Maple cue was stolen from his car. From then on he was unable to recreate his magic of the Asian Games. Hence, he dropped off the main snooker tour in 2007.

Outside of the sport, Ali also won a Big Break episode in 1996, which also starred snooker players such as Lee Richardson (ENG) and Terry Griffiths (WAL).

Ali also coaches both in the UK and overseas from time to time.

Playing against the legends of the game and winning a gold medal in snooker certainly summarises the career of Shokat Ali.

Hopefully, more youngsters from the British Asian community can follow his footsteps and achieve great things in snooker.

Which Bollywood Stars are the Biggest Football Fans?
Arfan Dad: The Hotshot of English Pool