6 Top Indian Female Snooker Players who Made a Mark

Women cueists from India have made a mark on a national and global level. We showcase 6 top Indian female snooker players.

"I am on top of the world. It's a wonderful feeling"

The best Indian female snooker players, boast plenty of trophies and wins to their name.

Possessing certain qualities and performing consistently have been key to the success of several Indian female snooker players.

Women cueists from India have bagged national titles and also competed on a world-class level, succeeding overseas too.

Vidya Pillai is a star snooker player, with others also achieving various accolades in recognition of their services to the sport.

All the reputable Indian female snooker players belong to different parts of the country, reflecting a good national mix.

We closely look at 6 fantastic Indian female snooker players, highlighting some of their major achievements and performances. 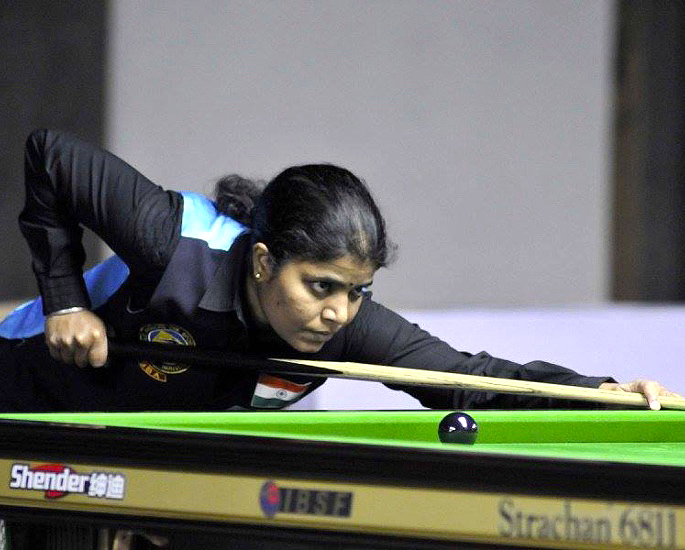 Chitra Magimairaj is an Indian snooker player, with plenty of experience under her belt.

In the 2012 final, Chitra defeated Neena Praveen from Tamil Nadu 3-1. Chitra was over the moon, following an eleven-year wait to win her first full snooker national in 2012:

Chitra became the first Indian woman to win the Australian Open Snooker Championship in 2008. During this tournament in Sydney, Chitra also registered her highest snooker break of 91.

In 2014 and 2016, she went on to secure the Eden World Ladies Senior Championships. The 2014 title was remarkable, with Chitra making her first appearance in the tournament.

Chitra beat Alena Asmolava from Belarus convincingly 3-0 in the best of five final in Leeds, England on April 22, 2014. In 2016, she demolished England’s Sharon Kaur by the same scoreline.

She is the recipient of many honours, including the 2007 Eklavya Award and the 2008 Sports Writers Association Award (SWAA) for ‘Best Sportsperson’. 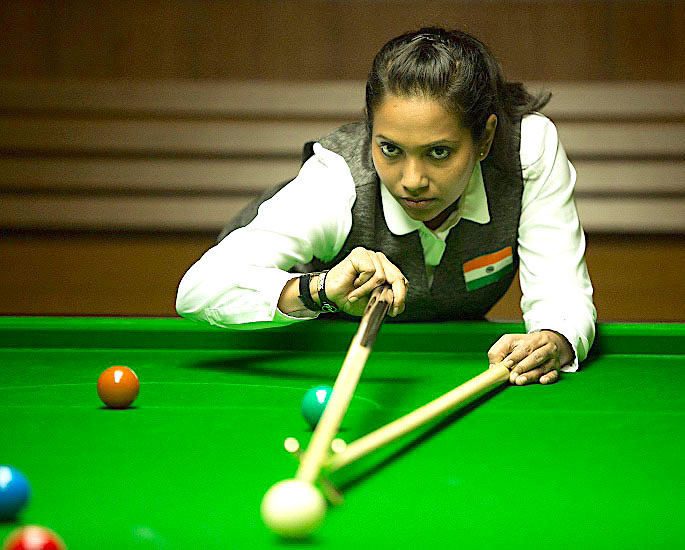 Vidya Pillai is one of the greatest Indian female snooker players. She was born Vidya Viswanathan Pillai in Tiruchirapalli, Tamil Nadu, India on November 26, 1977.

She was a late starter to the game of snooker. Former Indian cricket player, Hemang Badani was instrumental in introducing her to cue sports at the age of twenty-two.

Famous as the ‘Queen of the Green’, she is a ten times gold national champion. For her eighth title in 2016, Vidya had to dig deep and come from 0-2 behind to win 4-3 against Chitra Magimairaj.

Vidya felt this final match was amongst the most challenging of her career:

“One of the toughest finals I have ever played.”

In 2013, she was the winner of the Indian National 6-Red Snooker Championship. On a global scale, she has several gold accomplishments.

In the 2013 team competition, Vidya and partner Arantxa Sanchis beat Hong Kong 3-2 in Carlow, Ireland. Vidya told the Times of India that she was feeling good after keeping calm in a hard-fought game:

“I am on top of the world. It’s a wonderful feeling that cannot be described.”

“It was a tough game for us as the Hong Kong cueists played very well at every stage but we held our nerves and managed to emerge triumphant.”

She also won a silver at the 2017 WLBSA World Women’s Snooker Championship in 2017 (Singapore) after narrowly losing 6-5 to Ng On-yee (HKG).

Her highest break in competitive snooker is 94 and she has reached a highest ranking of 2 during her career.

Other than snooker, she has won the Indian National 9-Ball Pool Championship on numerous occasions.

In recognition of her phenomenal sports performances, she received the prestigious Eklavya Award from the Government of Karnataka. 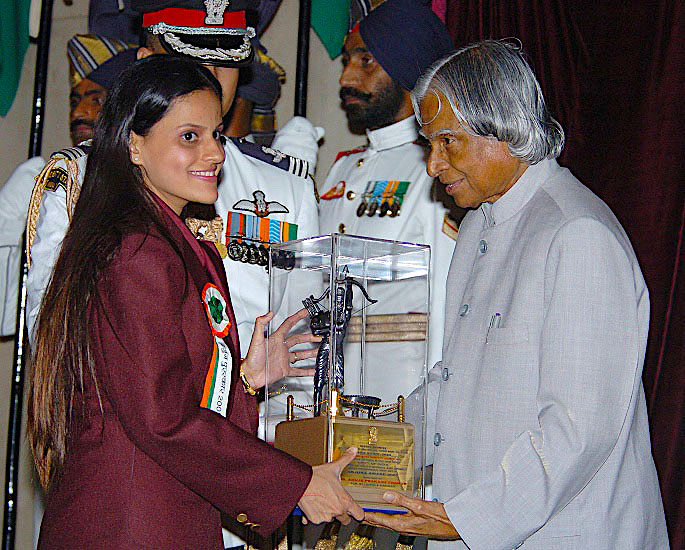 Anuja Chandra-Thakur is an Indian snooker player, featuring at the amateur level. A native of Mumbai, she was born Anuja Prakash Thakur on August 28, 1982.

Anuja has won quite a few snooker titles at the state and national level, giving her the limelight in the sport.

In the 2006 Snooker National Championship, Anuja was triumphant after overcoming defending champion Vidya Pillai in the final.

Anuja lost the first frame, courtesy of some brilliant play by Vidya. However, Anuja took three frames on the trot to secure the title.

Anuja was particularly good with her long shots. Her flair also came into play as she beat Vidya 3-1 in Chennai.

At the 73rd National Snooker Championship, Anuja crushed Vidya 3-0 in the final. Anuja had earlier beaten her sister Meenal Thakur in the last four of the tournament.

She also made it to the last four of the 2006 IBSF World Snooker Championship that took place in Amman, Jordan.

Anuja has a highest break of 78 in competitive snooker. Anuja is also a world ladies champion, winning the top prize in 2005.

The same year, Anuja received the Arjuna Award from President Abdul Kalam for billiards and snooker.

The Arjuna Awards is a prestigious honour, recognising individual outstanding performance in sports. 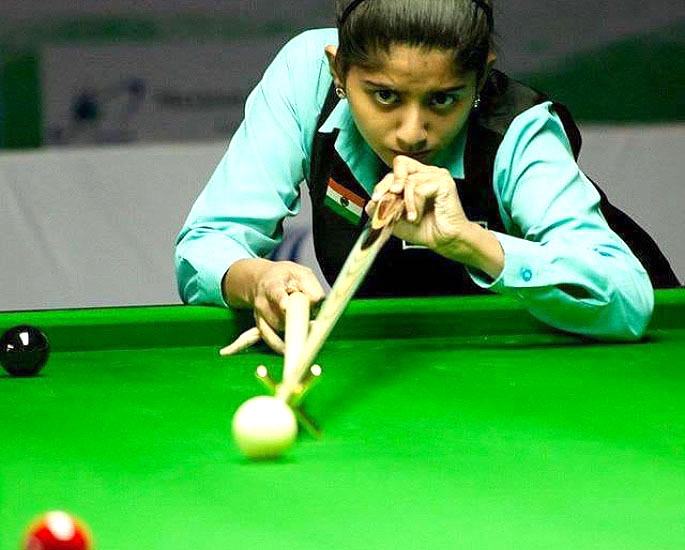 Arantxa Sanschis is one of the top Indian female snooker players. She was born in Mumbai, Maharashtra, India on April 27, 1990.

It was at the age of around 14-15 that she began playing snooker. She picked up a cue for the first time at Pune’s College of Military Engineering where her father was serving in the Indian Armed Forces.

She reveals her early experience of cue sports to Sportskeeda, stating:

“I was a regular Army kid and till I was 14 or 15, I had no idea about billiards or snooker.

“So my father used to regularly frequent the Army club and that’s where I asked my father whether I could try or not. Luckily, the first shot I tried, I potted the ball, so the love affair started there.”

Her first taste of success came in Pune, winning the 2006 Snooker Championship.

She is a ten times National and twice Maharashtra State Championship winner.

However, her biggest achievement is when she clinched a gold at the first IBSF World 6-Red Snooker and Team Snooker Championship in the women’s event.

Teaming up with Vidya Pillai, Team India beat Ng On-yee and So Man Yan of Hong Kong 3-2, in what was a nail-biting finish.

Arantxa has reached a career high ranking of thirteen in snooker.

She has received many recognitions, including being honoured by the Maharashtra Government with the 2013-2014 Shiv Chhatrapati Award.

Arantxa is also a junior, national and international billiards champion. 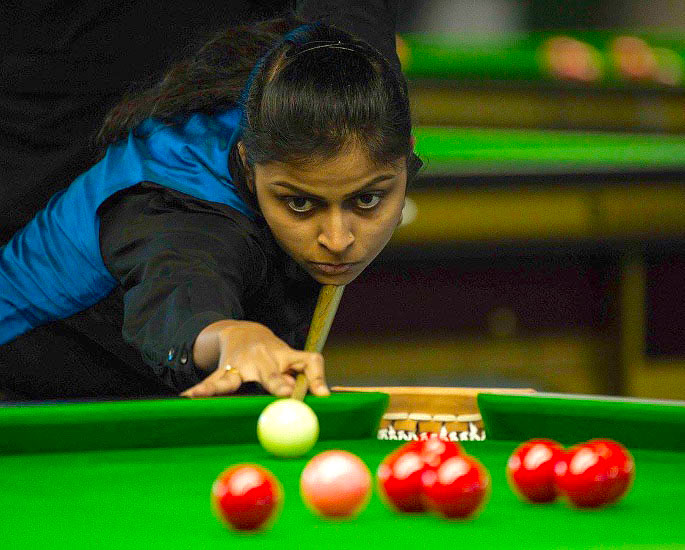 Amee Kamai is an Indian national winning snooker player. She was born in Indore, Madhya Pradesh on June 3, 1992.

In 2011, as a teenager, she began practicing on the green table at Indore’s Madhya, Pradesh Snooker, Billiards Academy.

In 2016, she defeated the same opponent, 4-1, in the Indian National 6-Red Snooker Championship.

Amee was also the winner of the World Women’s Snooker Championship Challenge Cup, defeating Nutcharut Wongharuthai (THA) 4-2 in the final.

From all square at 2-2, Amee took two consecutive frames to seal the victory.

She won the national snooker tournament for the third time in 2018, having also become the 2017 champion.

In the 2018 final against Varshaa Sanjeev, she came from 3-1 behind to win 4-3. The deciding frame was a nail-biter, with Amee just coming through by 44 points to 38.

Amee spoke about how she had to eventually hold her nerves to become triumphant:

“The pressure of playing the final made me quite nervous. When I trailed 1-3, I made a conscious effort to calm down and let the game take its natural course.

“I was then able to relax and perform at my best.” 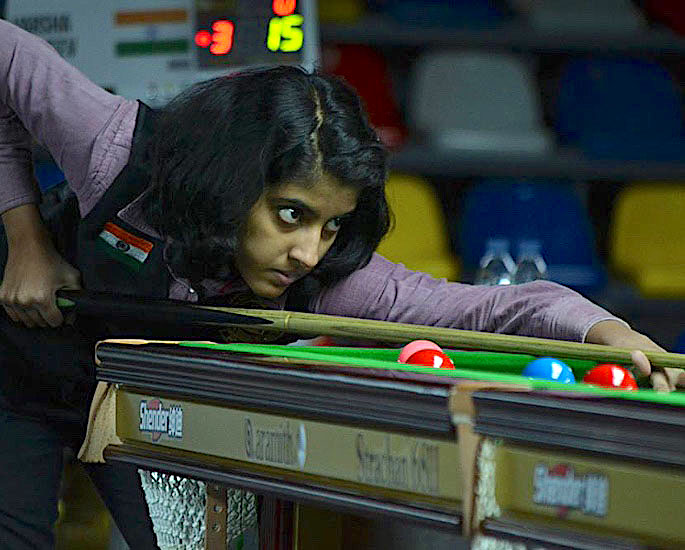 Varshaa Sanjeev is one of the most gifted Indian female snooker players. She was born on November 26, 1996. Varshaa started playing at the junior level, winning snooker tournaments at this stage

In 2016, she won the 2016 Eden World Ladies Championship (Plate), defeating Suzie Opacic from England. In the best of five frames, Varshaa came on top 3-1.

As of 2021, her best World Women’s Championship campaign came in 2018 reaching the quarter-final. This tournament was held in Malta.

She claimed her first national title in 2019, beating favourite Arantxa Sanchis 4-2 in the women’s final.

It was a stellar tournament for Varshaa as she was on prime form at the Yeshwant Club, Indore, India.

She registered a narrow 3-2 victory against Amee Kamani in the last eight. Varsha then toppled Vidya Pillai 3-0 in the semi-final.

She is familiar to many as the ‘Princess of the Green Baize’. Varshaa is also an accomplished billiard player, clinching titles in this discipline too.

Other credible Indian female snooker players did not make the cut for our list.  R Umadevi Nagaraj, Saniya Arif, Keerath Bhandaal and Suniti Damani are a few to name.

Indian women’s snooker has come far, but the road ahead is still long.

Nevertheless, the aforementioned Indian female snooker players can inspire future generations across all backgrounds to bring further laurels for the nation.