5 Top Indian Snooker Players who have Shined in the Game

The game of snooker has grown in India over the years. DESIblitz presents 5 top Indian Snooker players who have done well in the sport.

"I have been bringing medal glory to the country"

The success of Indian snooker players has seen the rapid growth of cue sports across India.

A few decades after the British introduced the sport in India saw a gradual birth of talented snooker players emerge in the country.

Most of the players have gone to play the game on a professional level, with some also excelling in billiards.

Snooker players from India have made a mark on the international circuit, winning big competitions and receiving several accolades.

Aditya Mehta has reached a ranking tournament final and made a 147 maximum break. 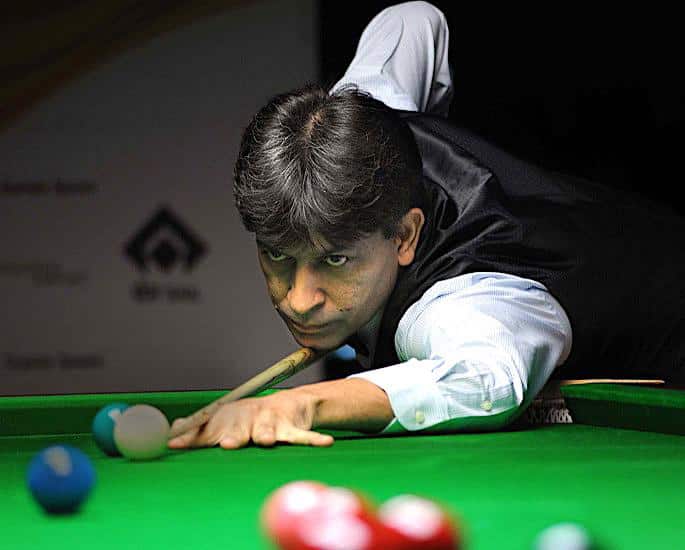 In the gentleman’s game on the green baize, Sethi was known to have the eyes of a hunter.

Despite dominating the game of billiards, he was also notable snooker player from India. Though he primarily played snooker on the amateur circuit.

Despite not making it big in the world snooker rankings, he is the only player in cue sports history to have made a 147 maximum break, along with more than a 1000 breaks in competitive billiards.

Sethi did play both games with the same level of ease. He once stated:

“Though the strokes may be the same, the manner of the games is different. I enjoy both.”

As a major sporting hero from India, he has won several awards. Between 1992-1993 he received the Rajiv Gandhi Khel Ratna the highest sporting award of India.

Earlier in 1986, he was also honoured with the Padma Shri and the Arjuna Award.

He is also the author of the autobiographical inspiring book, Success vs Joy (2005). 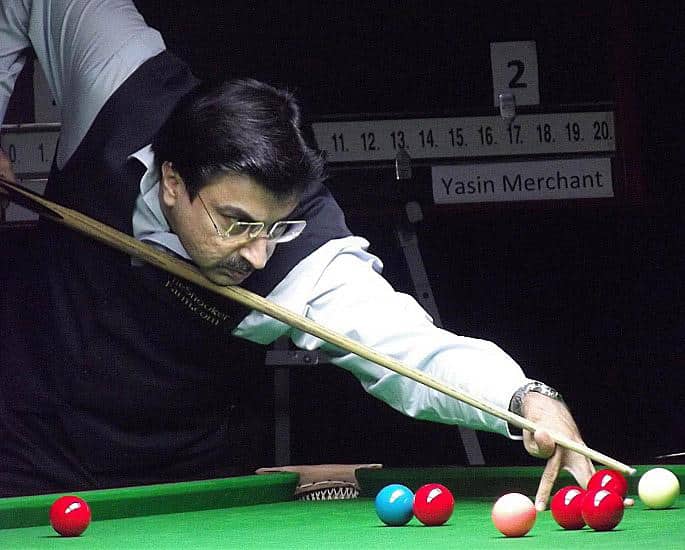 Familiar as the Prince of Snooker, Yasin Merchant was born in Mumbai on December 19, 1966.

In 1986, Merchant became the junior national champion. The late 80s was a good period for him as he went on to win titles both at home and in Pakistan.

In 1989, he won the 6th Asian Snooker Championship which took place in Delhi. He was the first Indian to win this tournament.

Yasin was also triumphant at the 1989 Masters Championship held in Pakistan.

Turning professional in 1991, he made it to the last 32 in two ranking tournaments. These include the 1995 German Open and 1996 UK Championships.

The year 1991 became even more special as he went on to receive the prestigious Arjuna Award.

His highest break of 141 came during the 1997 World Championships qualifying stage.

During his playing days, he was the sole torchbearer for Indian snooker across the globe. Retiring from the sport in 2011, Yasin went into coaching.

He is a Grade 2 WPBSA World Snooker coach and runs the Yasin Merchant Snooker Academy. 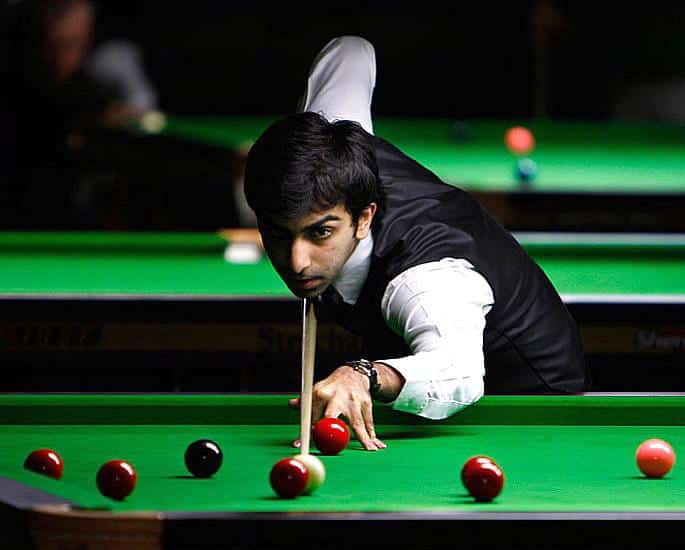 Pankaj Advani is a legendary snooker and billiards player who was born in Pune on July 24, 1985.

At the age of 18, he became the youngest player from India to win the 2003 IBSF World Snooker Championship in Jiangmen, China.

In the next decade, Pankaj won the IBSF 6-Red Amateur World Snooker title.

At the Welsh Open 2013, he was the first snooker player from India to reach the last eight of a ranking event, following his 4-1 triumph over Graeme Dott (SCO).

After making it to the quarter-finals, he told the media:

“It’s exciting to be playing against the best in the world, at the top level and under the best conditions.”

“I’ve had a fantastic tournament and lost to a terrific player.”

After the first and second year on the main snooker tour, Advani was number 74 and 56 respectively in the world rankings. To make it into the top 64 was a great achievement.

In 2014, Advani left the snooker tour to concentrate on his billiards career.

He played professional snooker from 2012-2014. The Prince of India, The Golden Boy and The Prince of Pune are some of the nicknames Pankaj goes by.

During the 2016 China Open qualifying stage, Advani made his highest break of 136.

During May 2016, he made history by becoming Asian 6-Red champion, defeating Keen Hoh Moh from Malaysia 7-5.

Pankaj is an inspiration to young snooker players who want to make it big in the game. 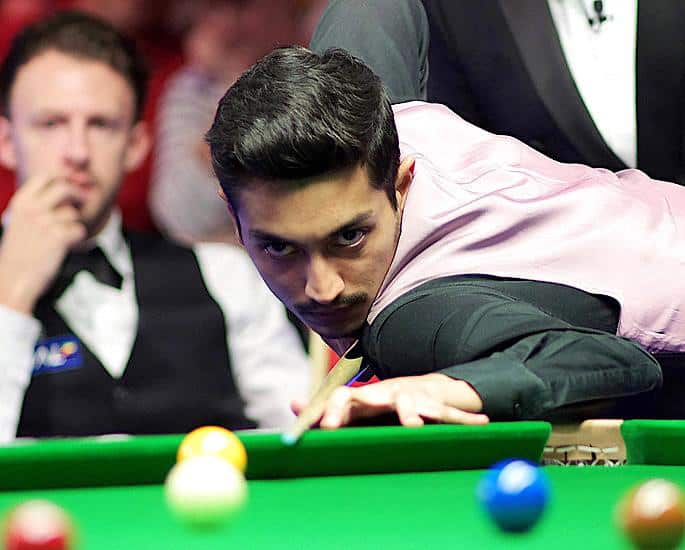 Aditya Mehta familiar as The Sun of Indian Snooker was born on October 31, 1985.

In 2004, Mehta started playing professional snooker on the Challenge Tour.

During the 2008/2009 season, he became the second Indian player to get onto the main tour after Yasin Merchant.

At the 2010 Asian Games in Guangzhou, China, Aditya claimed a silver and bronze medal in the team and singles competition respectively.

2013 was a very successful year for Mehta. In July of that year, he became the first Indian to bag a gold medal at the Colombian World Games, defeating Liang Wenbo 3-0 in the final.

At the inaugural 2013 Indian Open, Mehta also became the first player from India to reach the final of a ranking event.

After the match, he said:

“I have been doing well over the years. I have been bringing medal glory to the country, but today’s final appearance, it’s the greatest milestone I could have achieved in my career.

“This shows that nothing is impossible.”

His great run in 2013 allowed him to finish the season as world number 49.

Aditya made his first maximum break (147) in professional competition at the 2014 Paul Hunter Classic.

From then on, Mehta did suffer a dip in form, along with a neck injury. That was enough for him to drop off the main tour. 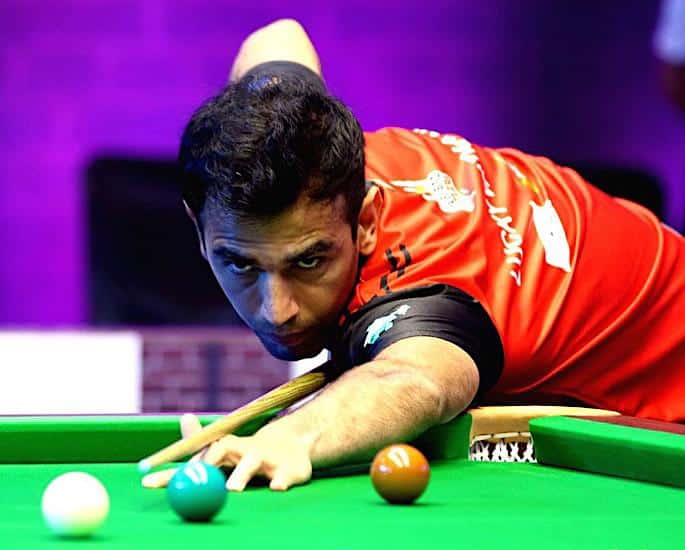 Lucky Vatnani is a snooker player who was born in Hyderabad on December 23, 1985.

After graduating in Sports Business Administration from Sheffield Hallam University, he did show a lot of early promise as an amateur snooker player.

In 2009, he won a gold medal at the British University Snooker Championships.

His stay on the main tour was very short as he could not finish inside the top 64.

He won the 1984 World Amateur Championship, defeating Terry Parsons (WAL) 11-7 in the final.

With such fantastic Indian snooker players having played the game, we can expect more cueists to make the main tour in the future.