Ding Junhui won the 2013 Indian Open snooker title after comprehensively beating Aditya Mehta 5-0 in Delhi. Mehta rewrote history by becoming the first Indian to enter a final of a professional ranking event, giving snooker a big boost in the country.

"It’s the greatest milestone I could have achieved in my career."

Aditya Mehta became the first Indian player to reach the final of a world ranking snooker championship on 18 October 2013.

Aditya eventually went down to world number four, Ding Junhui of China in the final of the inaugural 2013 Indian Open.

Enter the Dragon, Ding Junhui beat Aditya Mehta 5-0 in a very one sided final to take home a winners cheque of £50,000 and the trophy.

Ranked seventy-two, Mehta had a dream run enroute to the final, beating compatriot Pankaj Advani in the quarter-finals and Scottish world number five, Stephen Maguire in the semi-finals.

Ding Junhui, came into the Indian Open on a high after winning the Shanghai Masters against Xiao Guodong, which made history as it was the first ever all Chinese ranking snooker final:

“I think I am playing the best snooker of my career. I have improved and I’m stronger. I still have a lot of things to learn,” remarked the 26-year-old.

This was Junhui’s eighth career ranking title and his second in as many weeks. He also becomes the second player on the professional circuit alongside Ronnie O’Sullivan to win back-to-back ranking titles following this victory. 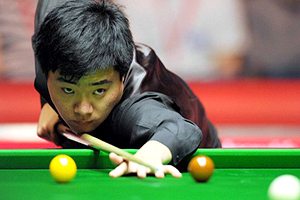 In the final Mehta on a break of 30 missed the next red, as Junhui cleared up with a fluent 52 break to go 1-0 up. It looked bleak for a tiresome Mehta from this point on.

It was such a blistering performance by the Chinese that in the next four frames Mehta only managed to take two points as Junhui cleared up with breaks of 81, 107, 93 and 100 in the final frame to seal victory.

After the match Junhui said: “It feels great to be the champion at the first ever ranking tournament in India, especially to play against Aditya in the final. I’m proud for myself and I’m enjoying this.” 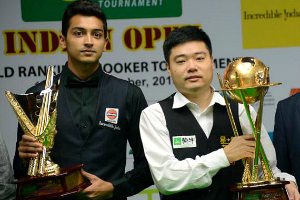 For Mehta it had been a fantastic week as he reached the final in his own backyard. A determined Mehta said:

“I have been doing well over the years. I have been bringing medal glory to the country, but today’s final appearance, it’s the greatest milestone I could have achieved in my career. This shows that nothing is impossible.”

Though Mehta and Ding practice together at the Star snooker academy in Sheffield, the final clearly favoured the experienced Chinese player. Mehta seemed to have given too much respect to his opponent, which is quite understandable considering that he was playing in his first pro-tour final.

Also it was a long and tiring schedule for Mehta, which contributed to a whitewash defeat in the final.

In round one he had to fight tooth and nail to beat England’s Peter Ebdon 4-3, before a powerful performance to destroy Hammad Miah (ENG) 4-1 in round two. In the last sixteen he saw off Mark Williams (WAL) 4-2, which set up a mouth-watering quarter final tie against fellow Indian, Pankaj Advani. 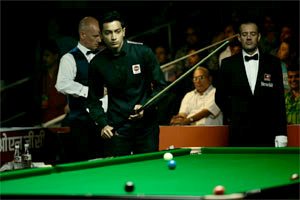 Frame two saw Mehta taking caution to the wind with a lot of safety play as he steadily potted balls and accumulated points to win the frame (0-70).

The third frame took over an hour, as both players did not want to leave the other an easy starter, before Advani finally potted the black ball to take a 2-1 lead (82-68).

Advani somehow fought back in the sixth frame to take the match to a decider (66-45). In the deciding frame, Mehta came out storming and blew Advani away with some fine snooker to wrap up the frame (0-72), the game and a place in the history books:

“It was a stretch for four hours because two Indians were involved. My safety was good and that’s why I could stop a player of Advani’s calibre,” said Mumbai-born Mehta. 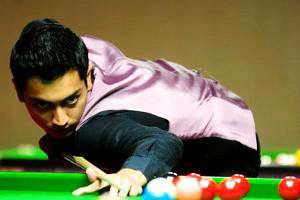 In the semi-finals Mehta came up against world number five Stephen Maguire (SCO).

The Indian swept away the Scotsman in the first three frames which included a break of 132, but Maguire’s 3-3 comeback left it to another decider for a place in the final.

Mehta must have had his previous encounter with Maguire in Germany on his mind as he let slip a 3-2 lead to lose the game 4-3. But on this occasion Mehta took the initiative in the deciding frame with an early break of 32 followed by some superb safety play leaving Maguire needing two snookers with only the blue, pink and black left on the table.

Mehta was put under pressure as Maguire clawed back five points and then potted the blue, but the Indian held his nerve and potted the pink to book a place in the final.

The sport of Snooker finally came home to the country where it was invented way back in 1875. It has taken 140 years for a snooker ranking tournament to take place in India, but it was worth the wait, especially with the progress of Mehta.

Aditya Mehta can now stand up and take a bow as he makes his way into the history books. Has he finally come of age to take the snooker world by storm? 2014 cannot come any sooner as India welcomes yet another sporting star.

Sid is a passionate about Sports, Music and TV. He eats, lives and breathes football. He loves spending time with his family which include 3 boys. His motto is "Follow your heart and live the dream."
Sania Mirza wins Fifth Title of 2013
Premier League Football 2013/2014 Week 8