Aditi Ashok is the first female golf player from India to win a European tour title, after a remarkable performance in the 2016 Hero Women’s Indian Open.

India’s Aditi Ashok scripts a new chapter in golf history, as she is the first female from her country to win a European tour title. She achieved this amazing feat with a commendable performance at the 2016 Hero Women’s Indian Open.

The 18-year-old golf prodigy who impressed many at the 2016 Rio Olympic games carded a level par (72) in the final round. She finished with a total score of 3-under par 213.

Aditi had to face stiff competition from USA’s Brittany Lincicome and Belen Mozo of Spain.

But birdies on the par-4 second, tenth and eighteenth holes was enough to land Aditi her maiden professional title at the DLF Golf and Country Club.

She finished 1 shot ahead of LPGA veterans Lincicome and Mozo who tied second in the tournament.

Speaking after her victory, Aditi told the media:

“I have had some good finishes in the Indian Open but to get the job done finally feels really good and especially finishing victorious in front of my home crowd is a really good feeling. It means a lot to win this.” 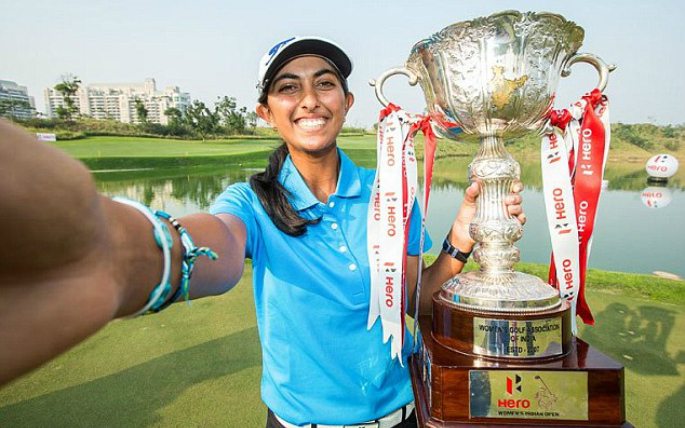 Aditi who already had a good season on the Ladies European Tour was relieved that she finally broke the shackles:

“It feels good to win the championship, I was playing good all year, I had four top 10 finishes. I had a good front nine but made a few mistakes on the back nine, but overall it was a good week.”

The golfer from Bangalore collected a winner’s cheque of $60,000 (approx. £48,200) and claimed the top spot in the Rookie of the Year Rankings. With two competitions left in 2016, Aditi will be hoping to hold her top spot in the rankings.

Aditi has been playing since the age of 5, winning her first national title at the young age of 9.

Aditi has worked hard for world-class recognition, with 17 titles overall, including 6 international wins and 5 low amateur finishes. Her best finish in LPGA major championships came at the 2016 Women’s British Open where she made the cut.

Despite being young and showing enormous potential, it may be too early to compare her with other Indian golfers like Aniban Lahiri.

However, Aditi Ashok is definitely forming her own legacy, as she wants to grow the sport in India and continue to practice at the highest level. She is taking a path that has never been travelled before.

Kushala enjoys Science and numbers but motherhood and music define her. With a passion for serving humanity, she works in education helping underprivileged children. Her mantra is 'To see change you have to be the change' - Ghandi.