The sixth seed defeated World No. 11 Carolina Marin of Spain 21-18 21-11. This was Saina’s second women’s singles title of the year, after winning the Indian Grand Prix Gold early in January. It was also Nehwal’s first Super Series title since December 2012.

Saina’s preparation for the final got off to a worrisome start as she woke up to aching and bleeding blisters.

But the former Danish Open champion was determined to not let the injury hamper her performance in the final. Carolina, a feisty player on the circuit was participating in her first Super Series final. 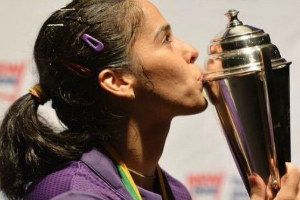 Erik Kirt of Denmark was the umpire for the final. Germany’s, Mark Speight was officiating in the capacity of service judge.

Saina began the match in aggressive fashion as she raced into a 12-8 lead in the first game against Spain’s Carolina Marin in the final.

The ace Indian shuttler who beat the World No. 2 Wang Shixian (China) in the semi-finals once again was in supreme form.

The Spaniard did make a brief come back with some good strokes towards the latter stages of the first game, but was not consistent enough. The 21-year-old born in Huelva in Spain, burst into emotion with each point she lost.

The World No. 8 from Hyderabad proved too strong as Marin hit the shuttle straight into the net as Saina claimed the first game 21-18.

During the first game, the London Olympics Bronze medalist demonstrated some good display at the net against her rival. Nehwal also stroked some delectably time volleys. 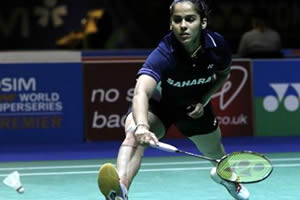 Following an interval break, the second game started more brightly for Marin as she initially took a 3-1 lead. But Saina who had won they’re only previous encounter regained the initiative as she went ahead 8-3, which included some fine baseline strokes.

In the end it turned out to be a comfortable match as Saina won 21-18 21-11 to clinch the 2014 Australian Super Series title. It took only fourty-two minutes for Saina to win the match. This was Saina’s first Super Series win in twenty months.

Saina happily threw her racquet out to the crowd, which one fan gladly accepted as a souvenir.

This was a great victory considering that Saina’s form had been indifferent in recent times. With this victory she became the first non-Chinese to win a women’s singles Super Series title in 2014. 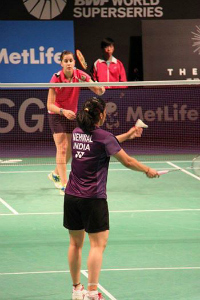 “This is one victory which answered all the doubts. There were many who thought I could never win again.

“This is a very special triumph for me because I believed I could win very soon and it happened.

“Surely this was the biggest challenge because I had to prove that I still am one of the best players in the world,” said the 24-year-old.

Speaking about his daughter’s win in terms of the season ahead, father, Harvir Singh said:

“Saina’s victory at the Australian Open will give her confidence for the Commonwealth Games and Asian Games taking place this year. This win will benefit her game. ”

He continued: “We are hoping that she will continue practicing the same and will gain further success.” 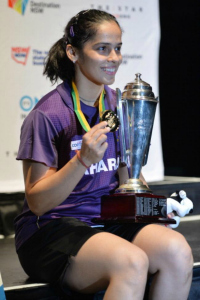 Having won the tournament, Saina received a winners trophy and medal, walking away with a cheque of $56,000.

Having lost the first set, Dan, the five-time world champion and two-time Olympic Gold medalist stormed to victory, with some brilliant touches in the match.

Overall it was a good tournament for India, with Saina Nehwal winning the singles title and PV Sindhu reaching the quarter-finals.

DESIblitz looks forward to seeing how the Indian duo perform at the 2014 Commonwealth Games starting from 23 July, 2014.