Badminton stars Saina Nehwal and Parupalli Kashyap have tied the knot in a very simple wedding. The two-day celebration began with several ceremonies.

Following the wedding, which was a very private affair, Nehwal and Kashyap posted images on social media.

Parupalli, also a badminton player is the Glasgow 2014 Commonwealth Champion.

The pair had reportedly been going out together for over the last decade. But they kept it under the wrap for quite a considerable amount of time.

Apparently, their official wedding date was December 16, 2018. Yet they became husband and wife two days earlier. 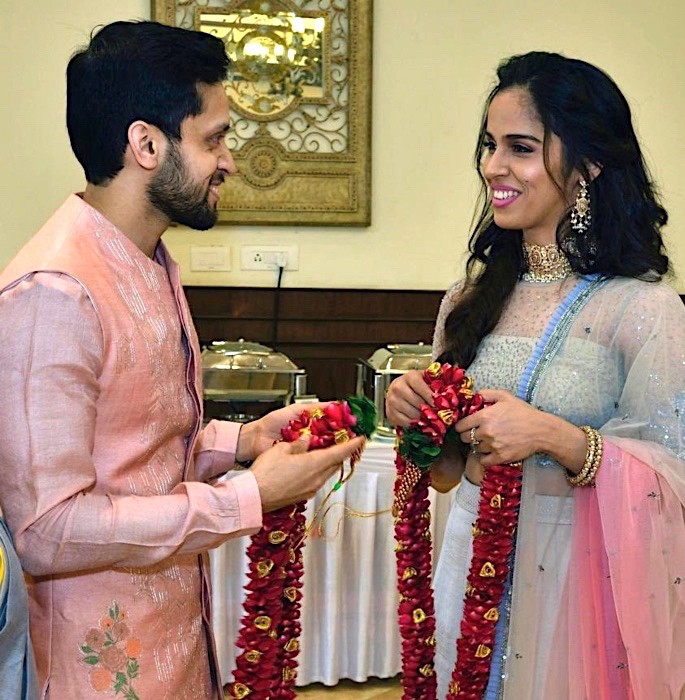 Since 2005, the pair have been training at the Pullela Gopichand Badminton Academy. It is at the Hyderabad training facility that the two first met each other.

In 2017,  prior to the third season of Premier League Badminton (PBL), Nehwal was caught partying with Kashyap alongside other teammates.

The two who did represent the Awade Warriors in the BPL were also seen together at the 2018 Denmark Open.

Saina Nehwal went on twitter to announce her marriage to Parupalli Kashyap with fans and well-wishers.

She even posted images on her official Twitter handle, captioning it:

In the photographs, Saina seems somewhat of an elegant minimalist in her wedding outfit. She was dressed in a powder blue lehenga with very little makeup and jewellery.

Sabyasachi is the designer for Nehwal’s lehenga and Vaishali Agarwal being the jewellery designer.

Even Parupalli wore a bright pink kurta with white pyjamas designed by Raamz and Chandrika. Both have garlands around their neck. 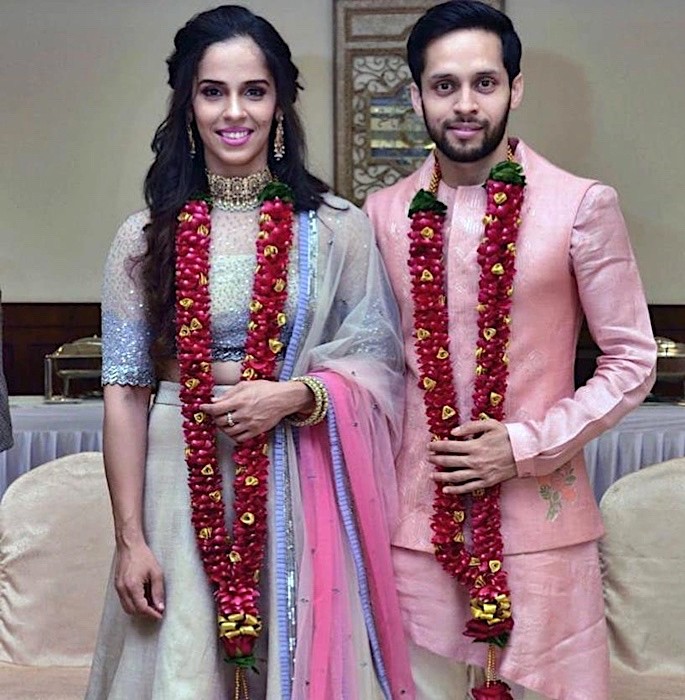 Similar to their attire, Nehwal and Kashyap had a simple wedding. Nehwal’s father Harvir Singh told PTI about the ceremony:

“It was a small gathering of about 40 guests, including relatives of the Saina and Kashyap’s families.”

The intimate wedding took place at Nehwal’s residence in Orion villas at Raidurgam in Hyderabad. 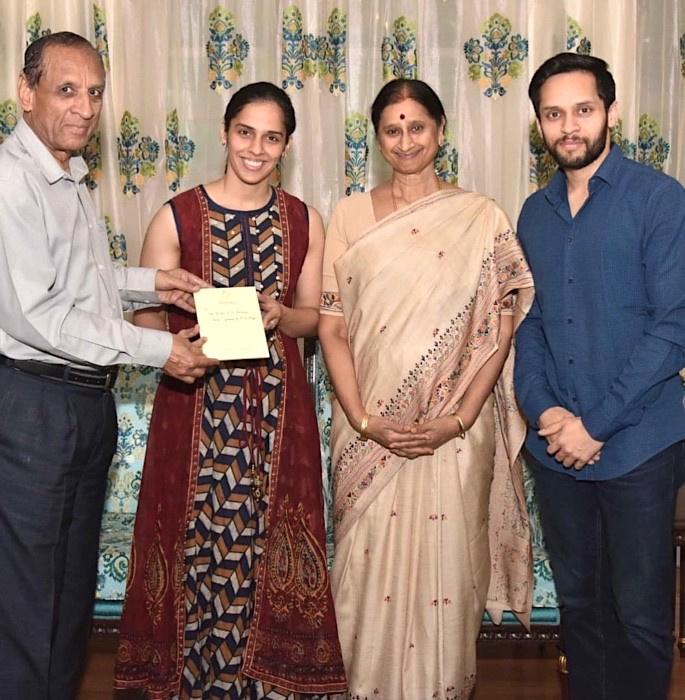 According to Singh prominent guests included ESL Narasimhan, the Governor of Andhra Pradesh and Telangana.

“Congratulations champ, wish you both a beautiful life, full of love and happiness, for ever and ever…”

Congratulations champ, wish you both a beautiful life, full of love and happiness, for ever and ever…

Despite not openly speaking about their relationship, in October 2018, Saina did confirm that the two were planning to tie the knot.

Nehwal, 28, mentions, she had been dating Kashyap, 32, since 2007 when they first went on tour together. 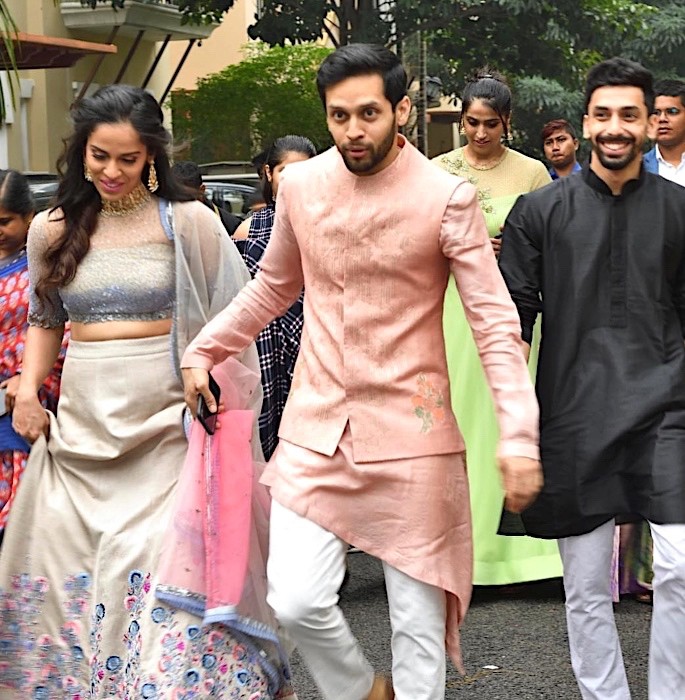 But the reason for delaying the marriage was so that they could focus on their individual careers:

“We started travelling for bigger tours from 2007-08 onwards.

“We played tournaments together, trained together and slowly, started paying more attention to each other’s matches.”

During November 2018, they did extend their wedding invitation to distinguished personalities such as  KT Rama Rao (Telangana MLA), Chiranjeevi (film star) and VRK Rao (owner of Hyderabad Hunters: PBL franchise).

The badminton pair also personally met Pullela Gopichand at his house to personally invite him. 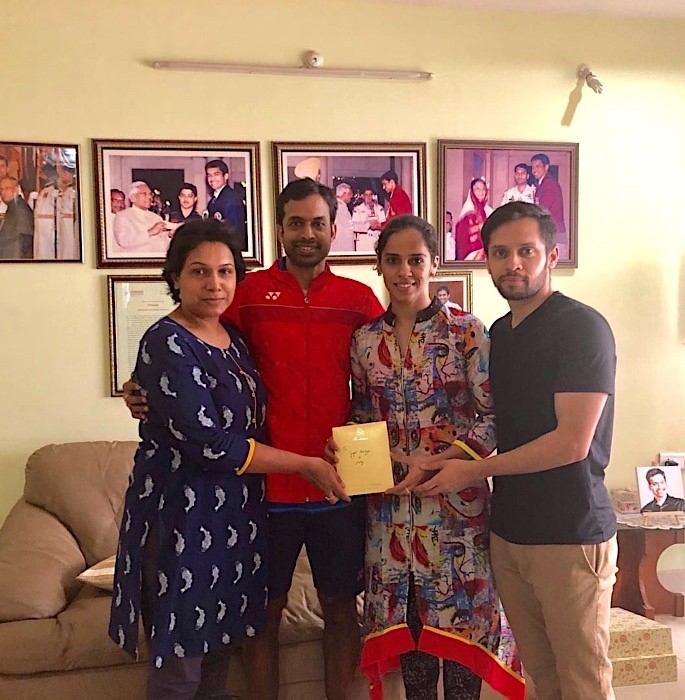 Pre-wedding festivities of the couple began with fellow badminton players arriving a few days before the ceremony in Hyderabad, the city of Nawabs.

Parupalli did share pictures on Instagram of the ‘Jeelakarra Bellam’ ritual. This is a very important tradition in Telugu weddings.

Similar to the haldi ceremony, but in place of tamarind, family and friends who were present to apply a paste of cumin seeds and jaggery on the bride and grooms’ head.

Gurusai Dutt, a fellow badminton player and a close friend of Saina and Kashyap did participate in the Telugu ceremony of Odugu. Odugu is a sacred thread ceremony. 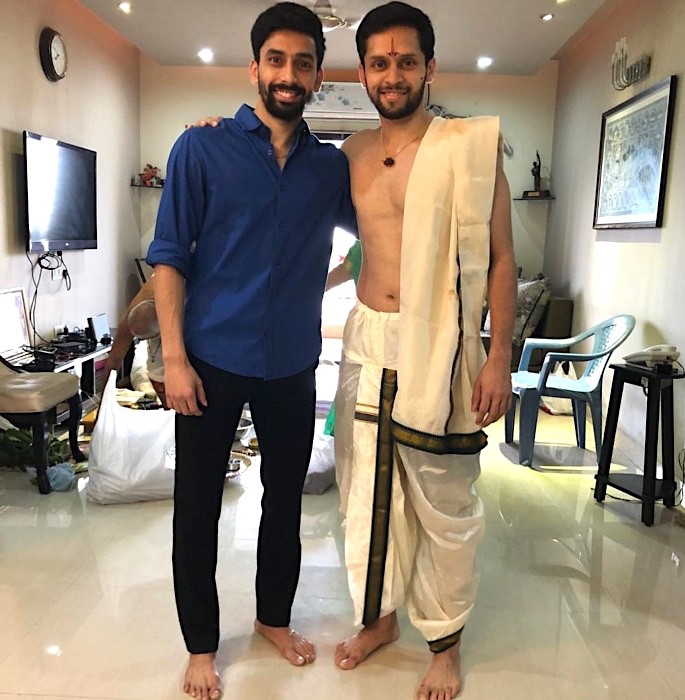 The two ceremonies were a truly family affair. His mother wore a green silk saree. Father and son donned blue and white mundu (a garment worn around waist), along with matching scarves.

Besides influential politicians and Gurusai Dutt, shuttler Sarang Lakhanee did attend the wedding.

The happy couple did marry with far less hype in comparison to the other high profile weddings of 2018.

However, a big wedding reception for Saina Nehwal and Parupalli Kashyap takes place in Hyderabad a week later on Friday, December 21, 2018.