“When you see that desire to excel that only a few have, like Roger Federer, I see that drive in Saina.”

Badminton superstar Saina Nehwal has made history as she becomes the first Indian woman to take the world number one spot on March 28, 2015.

The 25-year-old climbed to the top spot after Spain’s Carolina Marin lost 1-2 to Thailand’s Ratchanok Intanon in the semi-final of the India Open Super Series.

Not only has she replaced Chinese Olympic Champion Li Xuerui as world number one, Saina is also the first non-Chinese badminton player to be crowned since 2010.

In a sport that is traditionally dominated by Chinese players, Saina has achieved a great deal by breaking the pattern and marching on to win the Championship in style.

This is her first India Open title and more importantly, she is the first Indian female player to win the India Open. 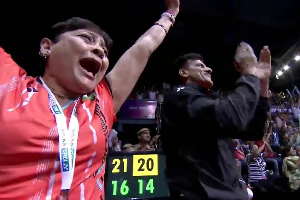 With her family cheering among the audience at Siri Fort Sports Complex in New Delhi, Saina showed great determination to win and was unstoppable on her way to a historic victory.

Her coach Vimal Kumar could not be more pleased, as Saina surpassed his target for her to reach world number one by May 2015.

He praised: “When you see that desire to excel that only a few have, like Roger Federer or Rafael Nadal, they have achieved so much but still wants to be the best. I see that drive in Saina.”

Her fans in India and abroad joined him to welcome the incredible news. The biggest names in India have also hopped on the congratulatory bandwagon!

T 1815 – SAINA NEHWAL becomes first Indian woman shuttler(badminton) to be World No 1 ! Saina you make us all INDIANS so proud !! NARISHAKTI

Then the cricket players:

Well done and keep smashing them on! A true role model for aspiring sports persons in the country. (2/2)

Even the President and Prime Minister:

The phenomenal accomplishments of @NSaina make us very proud. I congratulate her on being the World Number 1.

It has been a long dry spell for Indian badminton since Prakash Padukone became the first Indian player ever to be named world number one in 1970.

Saina’s achievement has certainly renewed the audiences’ interest in the sport. It will provide a great boost for young badminton players in India to aim for success at a global level.

Her victory is also expected to improve her chances at the 2016 Olympics in Rio de Janeiro. Her best record to date at the Olympic was a bronze medal in the London 2012 games.

One cannot underestimate the impact of what Saina has accomplished on India and the country’s female sportspersons. 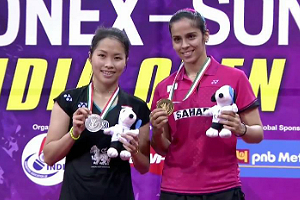 Saina’s success in the male-driven world of sports proves women in India, who are also poorly represented by the media, can be looked up to as role models as well.

Her journey to the top honour was not an easy ride, but that is exactly why it will inspire the younger generation in India – sports player or not.

After making her international debut in 2003, Saina has performed consistently well and sat comfortably within the world’s top ten since 2009.

But Saina wanted to be the best and made a tough decision to leave her coach Pullela Gopichand, who had been training her since she was a teenager.

She said: “When I was young, I kept losing to better players. I knew that if I had to improve, I had to play in Hyderabad.

“Then [in 2014] once again when I kept losing to the top Chinese players, I felt that I had to do something differently. So I made the change to go to Vimal [Kumar].”

Armed with improved tactics and a few golden words of wisdom from Padukone, Saina went on to beat three top Chinese badminton players in 2014 and 2015. Her rise to world number one was just a matter of time: 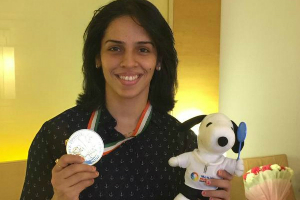 And that dream is now a reality for the Indian star. Saina will be taking over the top spot from Olympic gold medallist Li Xuerui on April 2, 2015 when the official world rankings are released.

Xuerui chose not to defend the points she earned by reaching the final of the Indian Open last year in order to be fully fit to defend her title at the upcoming Malaysia Open.

By reaching the semi-finals, Saina earned enough ranking points to take over the Chinese player and to push ahead of her closest contender for the number one position, reigning world champion, Carolina Marin, who was defeated by Ratchanok Intanon.

Saina was not the only source of pride for India at the Super Series. Kidambi Srikanth also snatched the men’s singles title after beating Denmark’s Viktor Axelsen.

DESIblitz congratulates both Saina and Kidambi on their amazing victory!