“This moment Arnold gave me the trophy, I can't explain.”

The Darwin parking inspector, won the ‘over 100kg class’ title at the US event held in Australia for the first time this year.

The event is named after the former Mr. Olympia and Hollywood action man, Arnold Schwarzenegger.

Karachi born Anwar is the first ever Pakistani to contest in the Mr Universe competition where he managed fourth position. The Pakistani competed with contestants from over 100 countries.

The 34-year-old has also won Mr Pakistan, Mr Sindh and Mr Karachi titles in the past.

Atif won the title in a sport mostly neglected by Pakistan, however, speaking to the media Sheikh Farooq Iqbal, President of the Pakistan Bodybuilding Federation, said: 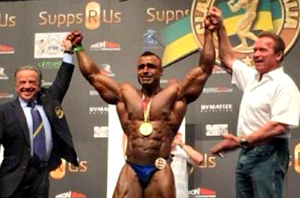 “Atif clinching the Arnold Schwarzenegger title is a big honour for Pakistan. By winning this title, he has made the Pakistan nation proud across the world.”

Pakistan Affairs posted a photo of Atif on their Facebook account with the caption: “Another proud moment for the nation. Pakistani bodybuilder Atif Anwar on Sunday won a title at the Arnold Classic bodybuilding competition held in Australia.”

Comments of congratulations and well wishes followed from fans across the globe who were eager to show their support on the social media pages. Twitter was also filled with comments and stories based on this happy ending.

The sportsmen and women took to the stage during the event and stood in an array of poses to show the judges every part of their hugely impressive bodies.

Arnold Schwarzenegger, after whom the tournament is named, was seen applauding and cheering throughout the competition.

He then awarded Atif with his winners’ medal and hosted an on-stage interview. He asked the winner how he was feeling, to which Atif replied: “It’s really good. I love Australia and my wife is here.”

His wife, Afshan, and son, Wahaj, then joined him on stage to a huge applause as the family were congratulated by Schwarzenegger. 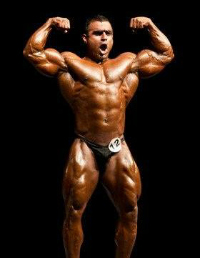 In an interview with Nadia Daly and James Dunlevie of ABC.net, Atif spoke of the moment he was awarded with the title: “This moment Arnold gave me the trophy, I can’t explain.”

His wife was also interviewed and she explained how it took a lot of patience and sacrifice to support her husband. “It’s a team effort. All the gym members, his team, his workmates, me obviously, being his wife.

“We all have to support him and he did it, so we’re very proud of him.”

By day, the bodybuilding champion is a parking inspector who calls himself ‘The Parkinator’, and by night he is a nightclub bouncer.

His supervisor, Conneil Brown, said that despite his training requirements. Mr Anwar’s mind always stayed on the job, despite often training before his 6:00am start.

Brown said: “He worked right through his training. I was excited for him, he’s very committed. I’m very proud of what he achieved.”

Winners of the title are called ‘Arnies’ after the Austrian-born American former professional bodybuilder, and politician.