Indian tennis star, Sania Mirza made history when she won her third Grand Slam title at the 2014 US Open. Mirza and her Brazilian partner Bruno Soares defeated Abigail Spears and Santiago Gonzalez in the Mixed Doubles final. The Hyderabadi dedicated her triumph to the people of India.

"I would love to dedicate this win like I said to the people of India and Telangana."

Playing their first tournament together, the top seeds beat the unseeded pair of Abigail Spears (USA) and Santiago Gonzalez (MEX) 6-1, 2-6, 11-9 in the final at the Arthur Ashe Stadium in New York.

This was Sania’s sixth Grand Slam final overall, and fifth in the Mixed Doubles section.

Mirza had already won the 2009 Australian Open and the 2012 French Open Mixed Doubles titles, both with friend and mentor Mahesh Bhupathi. Soares had previously won the US Open Tennis Championships in 2012 with  Russian partner, Ekaterina Makarova. 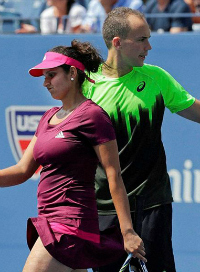 Tennis Sensation, Sania Mirza returned back to India on 07 September 2014 after winning her first US open title.

The three-time Mixed Doubles Grand Slam champion received a hero’s welcome as she arrived at Hyderabad International Airport. It is here that she dedicated her victory to the people of India and Telangana. She said:

“Thank you very much for this welcome, it’s a great feeling to win my third grand slam. I am very happy to be back in Hyderabad soon after.”

“It was a great couple of weeks. And I would love to dedicate this win like I said to the people of India and Telangana.”

Mirza also reached the semi-finals of the Women’s Doubles before she and her partner Cara Black (ZIM) suffered a 6-2 6-4 loss at the hands of Martina Hingis (SUI) and Flavia Pennetta (ITA).

In the Mixed Doubles final both set of players had a few nerves coming into the game. But Sania and Soares started brilliantly, returning well as they broke their opponents a couple of times early on. The Indo-Brazilian pair took the first set comfortably 6-1. 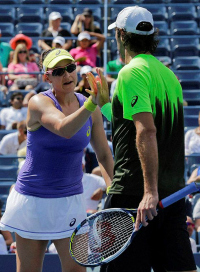 However in the third and deciding set tie-break, Sania and Soares remained positive, particularly after squandering five match points.

Spears and Gonzalez came back from behind at 9-4 to level at 9-9. At this stage the players and their respective fans had their hearts in their mouths. But Bruno and Mirza held their nerve as they won two consecutive points to win the 2014 US Open Mixed Doubles title 6-1, 2-6 11-9.

According to the match statistics, Sania and Soares were the better pair on the day. The winning S and S combination managed to get more 1st serves in at 80%. They also won a significant proportion of points on their second serve (73%), compared to their opponents (33%).

Sania and Bruno celebrated the win by kissing the winners trophy. The pair also received a cheque of $150,000 for the victory.

After the match a buzzing Sania Mirza tweeted:

“Champions of US open with @BrunoSoares82 thank u all sooo sooo much for the support and love. US open champions with @brunosoares82.”

During the trophy presentation, Bruno Soares complimenting his partner said:

“I keep getting the right partners I guess! Two years from now Sania is going to be in the semis in singles, I guess, like Makarova is this year.”

He continued: “I love playing out here, playing in the States. New York is a great city and it’s a lot of fun to be here.”

Many celebrities and politicians congratulated Sania Mirza after the win. In a congratulatory message, the President of India, Pranab Mukherjee said:

“Please accept my hearty congratulations on having won the US Open Mixed doubles tournament, making it your third grand slam title.” 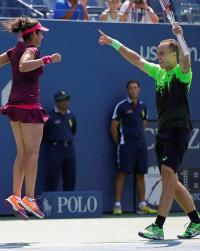 You have done India proud through this achievement and your success is an example of what can be through hard work and dedication. I wish you the very best for all future endeavours.”

Delighted by her performance, Prime Minister, Narendra Modi said: “Congratulations to Sania Mirza for the victory in the US Open Mixed Doubles Finals. We are very proud of the achievement.”

Sania has set herself new goals in the years to come. She will be hoping to achieve the Career Grand Slam by winning the  Mixed Doubles title at Wimbledon.

Mirza currently in the peak of her career, will also want to win a Women’s Doubles Grand Slam title, before she retires.

Sania, playing alongside Russian Elena Vesnina finished runners up in the Women’s Doubles final, at the French Open in 2011.

For now, Sania Mirza has left it to the All Indian Tennis Association (AITA) to decide whether she should compete at the 2014 Asian Games or the WTA tournaments which coincide with the extravagant event in South Korea.