Sprint star Usain Bolt visited India to play a charity cricket match with Yuvraj Singh at the Chinnaswamy Stadium in Bangalore. The Olympic Champion is an impressive talent not only on the track but the cricket pitch as well.

"I’m overwhelmed by the love shown by the people of India."

The world’s fastest man visited India for the first time, yet it was not for athletics, but a game of cricket.

It challenged him and International Cricket superstar Yuvraj Singh to a charity seven a side game.

The showdown was branded, ‘Bolt and Yuvi – Battle of the Legends’ and saw both stars play in Bangalore on the 2nd of September at the Chinnaswamy Stadium.

Bolt and Yuvraj are both ambassadors for Puma, and took the chance to show the world what they can do in a unique game umpired by former cricketer Ajay Jadeja. 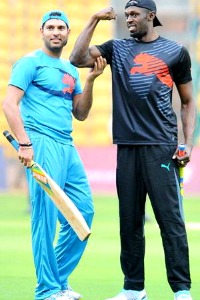 The game also featured popular cricketers Harbhajan Singh and  Praveen Kumar as crowds flocked to see the stars play after free tickets were given out.

Bolt led his team to a thrilling last ball victory, having scored 45 off 19 balls. Bolt hit five 6s in his innings, including three off Yuvraj.

As well as the cricket match, the stars also had a hundred meter race, which was won by Yuvraj.

After the match Harbhajan Singh said: “I think cricket is there in Usain Bolt’s blood.”

“Since I got to watch from close quarters, it was amazing to see him run-up to bowl. The perfect delivery stride is understandable because he is a world champion athlete.”

“But the manner [that] he loaded at the crease and then bowled the ball left me zapped. He looked like a natural cricketer. Probably, he would have been as successful playing cricket as he had been in athletics.”

Bolt has frequently been known to express a passion for football, and an admiration of Manchester United, but he has never before played a friendly match with international cricket stars.

Bolt’s genuine talent on the cricket pitch may surprise many of his fans, but he actually came very close to a successful career as a cricketer. He had planned to be a cricketer at a young age, but his father convinced him to pursue track and field. 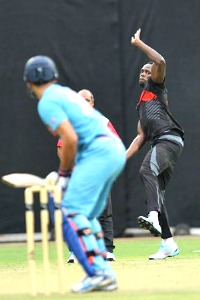 Despite not following this dream, Bolt retained his active interest in cricket growing up and particularly followed the Pakistani team.

He has said that he greatly admired their star players Wasim Akram and Waqar Younis.

Bolt’s skills at the stadium wowed crowds, and his interaction through headsets with fans kept everyone thoroughly entertained.

Speaking about his role in PUMA’s new campaign in India, Bolt said: “Forever Faster is a great slogan, it describes me perfectly. I’m overwhelmed by the love shown by the people of India and I’m thrilled to be here as a PUMA Ambassador.”

Rajiv Mehta, MD of PUMA India said: “Forever Faster – the new brand positioning is about PUMA reminding people that we are and will continue to be the fastest sports brand in the world.”

Bolt recently announced that he had moved back his retirement plans until 2017. He had previously planned to end his career after the Rio 2016 Olympics.

Rachael is a Classical Civilisation graduate who loves to write, travel and enjoy the arts. She aspires to experience as many different cultures as she can. Her motto is: “Worry is a misuse of imagination.”
Kash The Flash Gill ~ UK’s Legendary Kickboxer
Sania Mirza wins 2014 US Open Doubles Title