Kash The Flash Gill, is a former four times world champion in Kickboxing. In the twilight of his career, Kash had the whole world in his hands and feet. He is a role model to many youngsters and is often regarded as the People’s Champion.

"It was exciting, punching and kicking. I thought I have to have a go at that."

Described as ‘the UK’s most prolific Kickboxer,’ Kash The Flash Gill is a former four times World Kickboxing Champion.

After touring the world and winning many belts, Kash is still involved in the sport, extending his talents to the next generation.

Kashmir Singh Gill was born in 1966, to parents who were originally from the Punjab region in India.

Kash was brought up in a big family consisting of four brothers and one sister. Having witnessed the riots in the 80’s, he grew up as a tough kid in inner city Handsworth, Birmingham. 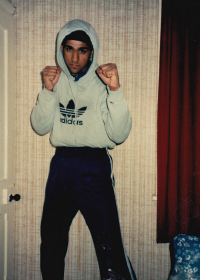 He was only nine-years-old, when his mother passed away. With his father working 18 hours a day as a foundry worker, Kash became much more independent at home.

Kash was adamant that one day he would leave the Handsworth area as many of the youth were involved with drugs and other high crimes. Many of his friends had already left the area.

Always wanting to do contact sport, his first choice was boxing. But ever since he saw his mentor and coach, Howard Brown kickboxing at a local park, Kash got attracted to the sport and never looked back. Recalling that time, Kash said:

“I seen this demonstration at Handsworth Park, which was right at my doorstep. I’d never seen it. It was exciting, punching and kicking. I thought I have to have a go at that. So I went to the local gym and ever since that day I became addicted and I loved it.”

Having started kickboxing at the age of 14, Kash only had only one goal in mind and that was to be world champion.

To ensure he could follow his dreams, Kash joined one of Howard’s clubs in Handsworth. As a fitness fanatic, he would run ten miles a night and work out three hours a day. Standing tall at 6ft 3”, he fought in his own flash way. 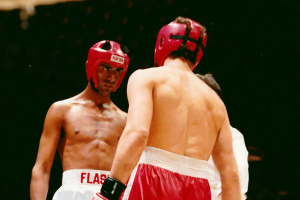 Gill’s natural ability and enormous reach earned him the nickname “The Flash” a name, which was also reflected in his team’s make up.

Dressed always in a shining gown, his entourage always composed of a Live Bhangra music band, educating audiences about his culture, tradition and roots.

After suffering a few early losses in his career, he wanted to stop fighting. But his father, a former champion wrester from Punjab encouraged him to keep going.

In 1986, he struck gold at the World PKA Amateur Full Contact Championships in France. At the age of 25, he had already won the Midlands, British, European and World Kickboxing titles.

If it was not for kickboxing abroad, Kash might not have seen some lovely places like Australia, France, Kazakhstan Hawaii, Netherlands and South Africa.

One of his biggest achievements in life is when he won the world title against Australian warrior, Alex Tui. The fight was stopped in the sixth round, after Kash managed to get in a nice right hand punch. This fight was special to him as he fought in the presence of his family at Birmingham AVLC. 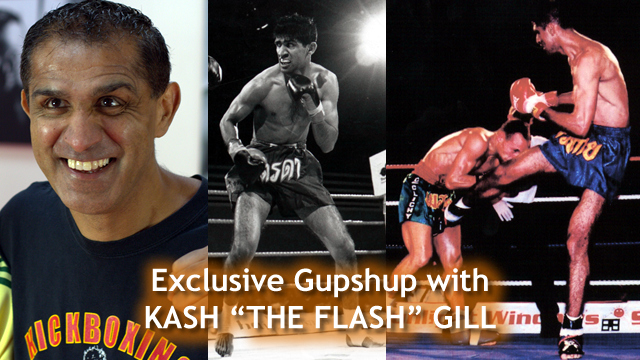 However his most memorable moment in the ring was the fight against Ronnie Hinterseer. The fight named, Thriller at the Villa saw the greatest comeback in the history of kickboxing.

In the seventh round of the World Eliminator action packed fight, Kash received a deadly punch, which broke his nose as he was knocked onto the floor. But after getting up, he miraculously survived round eight before eventually winning in round nine.

Speaking about his training and progress, which gave him the edge to become a World Champion, Kash said:

“I use to train 3-4 times a day, everyday. It’s all about quality not quantity. It’s the same for any profession out their, if you work hard you’ll reach the top.”

He had a do or die style in the ring, which was quite exciting. Kash thankfully knocked out others more than he was knocked out himself.

After retiring from the sport, Gill as a role model focused his energy on inspiring, training and coaching youngsters in health, fitness and self-defence. Thus in 2008 he opened his own gym in Handsworth, promoting unity across a multicultural community.

Without him many of the youth would have been drawn into crime and anti-social behaviour.

A reformed youngster attending his gym said: “He got me off the streets. Kash encouraged me to come to the gym, train hard, get in the ring and start fighting.” 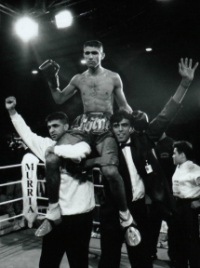 Many of his students have followed into his footsteps and gone on to become World Champions such as Sunny “The Hitman” Hira.

Kash has also visited schools/colleges, teaching students what he has learnt from the sport and life.

Outside the ring, one of his biggest accomplishments included a 1-year business course, which actually benefited him running the gym.

In 2012, Gill released his biography titled: My Life in a Flash, highlighting his childhood and how he took up kickboxing. There are fifty-three contributors to the book including UB40.

Kash in a Flash had a fantastic Kickboxing career with 84 wins from 100 fights, which included 43 knockouts.

Faisal has creative experience in the fusion of media and communication and research which increase awareness of global issues in post-conflict, emerging and democratic societies. His life motto is: "persevere, for success is near..."
Premier League Football Transfers 2014/15
Usain Bolt visits India for Cricket Friendly