Brazilian football legend Pelé was on a six-day visit to India, reliving his memories from 38 years ago and sharing kind advice with Atlético de Kolkata.

"Football is the biggest family in the world and only in football you see this kind of love."

On October 11, 2015, Brazilian football legend Pelé revisited Kolkata, where he ignited a football fever 38 years ago.

He received a hearty welcome from the Mohun Bagan players, who celebrated his long-awaited return to the city since 1977.

Indian legends Shyam Thapa and Subrata Bhattacharya were one of many who played for Mohun Bagan.

The Brazilian all-time leading goalscorer did not score in the 2-2 draw, but his fascinating freekick which hit the woodwork was the most stunning highlight of the match.

Among the guests at the grand celebration at Netaji Indoor Stadium were Grammy-winning music composer A. R. Rahman and former Indian cricket captain Sourav Ganguly. 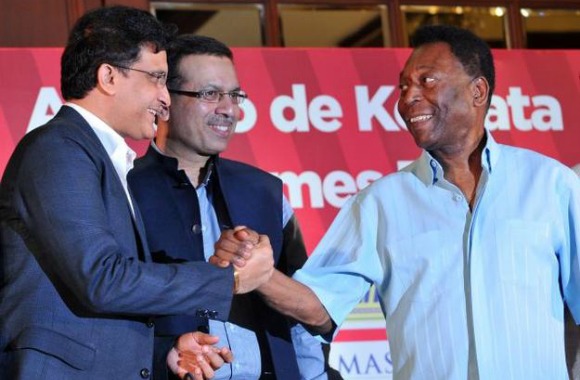 Next on Pelé’s itinerary was to attend Atlético de Kolkata’s first home match of the Indian Super League. Atlético did not disappoint the Brazilian and earned a 2-1 victory over Kerala Blasters FC.

At the media conference, he said: “Always respect your opponents and to the people, you may be the best but you can always learn something.

“Football is the biggest family in the world and only in football you see this kind of love.

“Thank you very much for this reception. I thank all of you from my heart and accept my thanks from all my fellow Brazilians.”

Sourav Ganguly and other co-owners of Atlético presented an autographed jersey for the legendary footballer for him to remember his historic visit by. 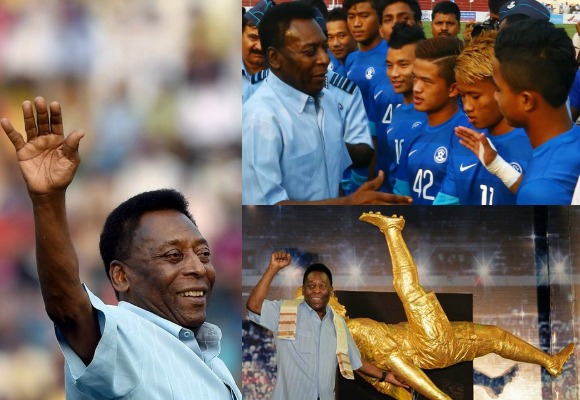 The decorated footballer wrapped up his six-days visit to India at Delhi’s Ambedkar Stadium on October 16, where the Under-17 Subroto Cup tournament final was held.

He awarded the trophy to the winning team, All India Football Federation, and took a round trip of the stadium on an open top Indian Air Force jeep, to give the crowd a night to remember.

The three-time World Cup winner affectionately waved and gestured in an open-top jeep to the frantic crowd chanting ‘Pelé Pelé’. 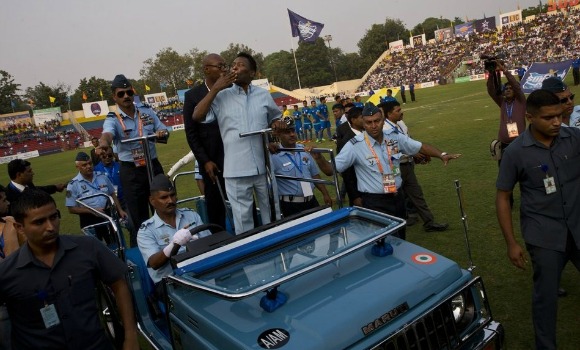 Pelé may not be good at prophecy (he almost fails every time trying to predict the winner of major football tournament), but there is no doubt about his natural talent in his sport.

With his tremendous goal-scoring record at more than 1,280, he is widely considered as the greatest footballer of all time.

You can watch his interview with Indian media here:

The 74-year-old has been struck by health issues in recent years and admitted to hospital three times since November 2014.

Although struggling to walk following a hip surgery, it is encouraging to see the legendary striker spending time in India in reasonable health and still putting on his famous grin.