Indian cricketer, Virender Sehwag, has announced his retirement from cricket on Twitter on October 20, 2015, which is also his birthday. DESIblitz reports.

“I will stay in cricket, maybe commentary or coaching in some academy.”

Indian batsman Virender Sehwag announces his retirement from cricket on his birthday, October 20, 2015.

His next tweet is two images of his statement letter, which confirms his intention to retire from ‘all forms of International Cricket and from the Indian Premier League’.

Sehwag expresses gratitude towards his fans and teammates for their ‘love, support and memories’.

He goes onto compliment many outstanding players that he has played with throughout his career. These would no doubt include the likes of Sachin Tendulkar and Rahul Dravid. 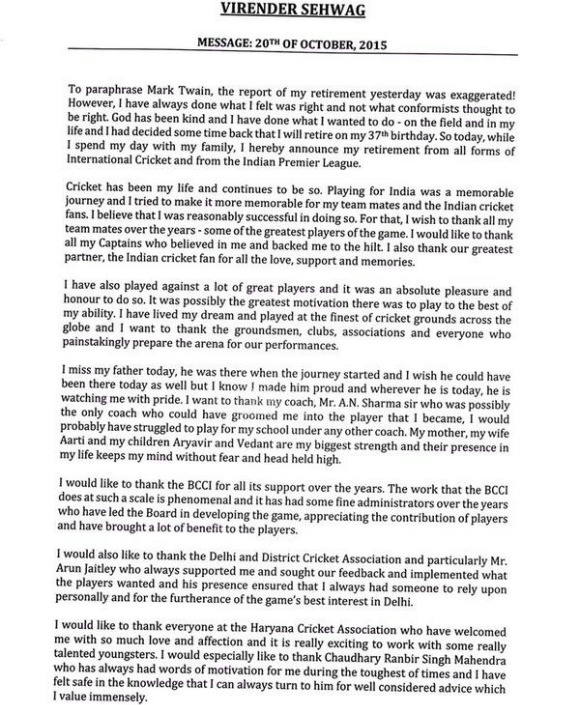 Sehwag also thanks his family and coach, A.N. Sharma, who give him strength and the motivation to power through the hard times and keep his mind ‘without fear and head held high’.

Speaking to the media, the decorated cricketer says: “I will stay in cricket, maybe commentary or coaching in some academy.

“When I crossed 281, was happy to see VVS Laxman standing and clapping in the dressing room. 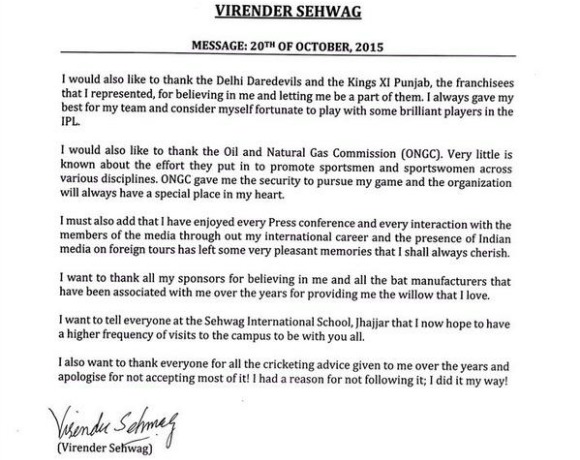 His former captain, Sourav Ganguly, comments: “It was his mindset which made Viru great.

“He is an absolute champions who could turn the game and was one of the greats in world cricket.”

I hereby retire from all forms of international cricket and from the Indian Premier League. A statement will follow.

Many fans are absolutely heartbroken over the news. Some have even started the hashtag ‘#WeWantSehwagBack’ on Twitter.

Another fan, @Ckafsu8, is truly saddened by the news, saying: “I will not watch cricket anymore without #sewag Bcz his contribution in Indian team and world cricket is unforgtble.ty veru.”

Sehwag’s decision to leave cricket has also invited a heartfelt reaction from famous cricketers like MS Dhoni, who tweets:

Sehwag began in his journey in cricket as a young boy in Rajokri, where he could not play much cricket due to limited opportunities.

But when he attended a government school in Vikaspuri, he picked up a cricket bat for the first time and has never looked back since.

After making his mark in one day internationals, Sehwag made his debut as an opening batsman against England.

He represented the India at the under-19 level World Cup in 1998 and also played in the Ranji Trophy.

Sehwag works hard at perfecting his skills. During his playing days, he would do net practice, take 200 catches, do some ground fielding and work out in the gym. 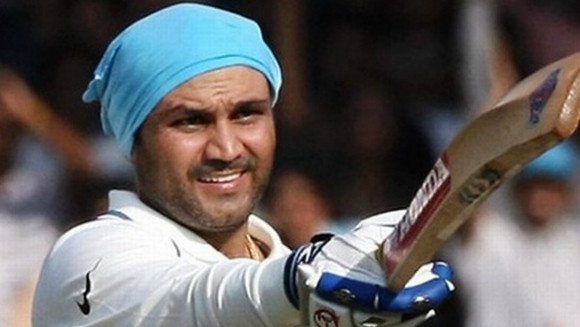 He is also known for his perseverance. When he played two historic first class knocks for Delhi, he was suffering from high temperature and dehydration Yet, he managed to scored 185 against Punjab.

However, he rates his 155 not-out against West Zone as his best innings:

“I scored my highest score against Punjab, but my Mohali innings was better. I was able to win the match of my side.”

His innings of 319 in the first test match against South Africa in March 2008 was the highest test match score by an Indian against any team. He had previously scored 309 against Pakistan in March 2004 in the city of Multan.

The talented batsman also scored the second fastest double century, coming off just 168 balls against Sri Lanka in Mumbai in 2009/2010.

Sehwag is simply brilliant and erratic at the same time with his batting, earning the reputation for being an explosive and hard hitting batsman.

DESIblitz will miss him in action on the field and wish him all the best in his retirement!

Images courtesy of AP and PA