"My life between 22 yards for 24 years. It is hard to believe that the journey has come to an end."

No player can be greater than the game itself. But one person who came closest to this landmark is Sachin Tendulkar.

Curtains drew on Sachin’s phenomenal cricket career as the ‘Little Master’ played his last match against West Indies at his home stadium in Mumbai, India. The time was 11.46 am on November 16, 2013.

The entire nation became emotional and tears rolled down plenty of eyes as the India gave farewell to the most iconic player they had ever known.

When Sachin Tendulakar took guard against West Indies at his 200th test at the Wankhede stadium, the whole world watched his brilliant innings with a special feeling of pride. The man in focus went on to score 74 runs which included 12 boundaries. 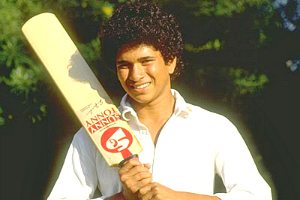 He missed another ton by 26 runs but a man of his class doesn’t need another ton to prove his worth. Every run scored by Sachin was cheered with extreme delight as a glorious career was coming to an end.

Sachin’s talent was a unique one. His father supported him and allowed him to make a career in a field of his choice. At an early age of 11, the genius was under the supervision of Ramakant Achrekar honing his skills.

His talent and hard work took him to the international podium at an age of just 16 years as he played his first match against Pakistan on November 15, 1989. With this match, he began an amazing dream of 24 years which the entire Indian nation lived and breathed alongside him.

Sachin’s career is synonymous to record. The record books are flooded with his name. Over a period of 24 years, Sachin Tendulkar has played with passion and put his name against the most honorable records in the cricketing history. 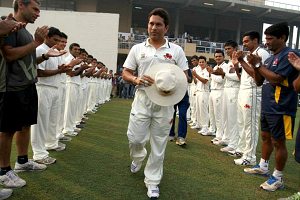 The master blaster has scored over 33,000 runs at international stage. The magician of cricket appeared in a record 200 test matches to score 15,921 runs including 51 centuries, both of which are records.

The master of cricket also went on to play 463 One Day Internationals to score 18,426 runs including 49 tons.

All of the statistics listed above are world records. He is also the first cricketer to score a double ton in ODI’s. He also holds the record of winning the Man of the Match award for the maximum number of times.

With a dream career like Sachin’s, the farewell had to be a phenomenal one too. India went on to crush West Indies by an innings and 126 runs to sweep the two match series 2-0.

After the usual Man of the Match and Man of the Series award, Ravi Shastri asked the legend to address the entire world. As Sachin prepared himself to address the crowd, everyone shouted their hearts out to cheer for the most celebrated cricketer.

A visibly emotional Tendulkar began his speech with these words: “All my friends, settle down. Let me talk. My life between 22 yards for 24 years. It is hard to believe that the wonderful journey has come to an end.” 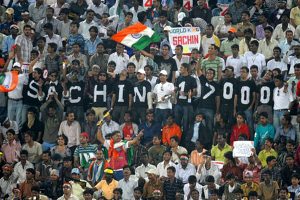 Sachin started by paying homage to his father and mentioning how he supported  and encouraged him to pursue his dreams. He also felt indebted to his loving mother who always prayed for him.

He mentioned his brother Ajit Tendulkar saying that he would have been a much smaller cricketer if there had not been the immense contribution of his brother who also happens to be his mentor and guide.

Sachin added that the best thing that happened to him was in 1990 when he met his wife Anjali and she made his life special. Sachin regretted the fact that he couldn’t spend as much time as he wanted to with his kids Sara and Arjun and promised that he would make up for it now.

A very humble Tendulakar also thanked his friends and support staff for their contributions.  He said that it was an honour to represent India and he had full faith that that the current team would perform extremely well at international stage in the future.

Towards the end of his speech, as the crowd was already brimming with emotions, the icon said:

“I know I have met so many guys who have fasted for me, prayed for me, done so much for me. I want to thank you from the bottom of my heart, and would also say that time has flown by rather quickly.”

“But the memories that you have left with me will always be there always with me forever and ever especially, ‘Sachin, Sachin!’ which will reverberate in my ears till I stop breathing. Goodbye.”

Sachin Tendulkar is not only the most celebrated cricketer but also treated as God in a nation where cricket is a religion.

Keeping his Godlike contributions in mind, the Government of India has decided to award him the ‘Bharat Ratna’, which is the highest civilian award. Times Magazine has also declared Sachin the ‘Man of the Moment’ and stated that the vacuum the cricketer has left can never be filled.

Sachin Tendulkar is the master of cricket, an idol, an icon and most importantly a humble person. This is an emotional time for all cricketing fans, to see such a stalwart of the game leave the green grass of the stadium.

On the behalf on the entire cricketing fraternity, we salute this incredible cricketing icon and say: “Thank You Sachin. You will be missed.”