South African top-order batsman Hashim Amla has retired from all forms of international cricket. DESIblitz looks back at 6 of his best innings in cricket.

“I learnt many lessons during this incredible ride"

During a career spanning fifteen years, the former South African batsman had many fantastic performances – be it in Test cricket or One Day Internationals (ODIs).

With South Africa having a poor ICC Cricket World Cup 2019, it was inevitable that Amla would say his goodbye to international cricket.

Amla finishes his career with respectable averages in all formats of the game. He had a Test average of 46.64, along with averaging 49.46 in ODIs.

He made twenty-eight Test centuries and twenty-seven ODI hundreds. Playing 125 Test matches, Amla had a top score of 311* against England.

His top score in ODI cricket of 159 came against Ireland at Manuka Oval, Canberra on March 3, 2015.

Despite not being a natural T20 player, he had an average of 33.60, with his highest score being an unbeaten ninety-seven.

“I learnt many lessons during this incredible ride, made many friends and most importantly shared in the love of a brotherhood called #proteafire.”

With Hashm Amla retiring, we revisit 6 of his best innings in cricket: 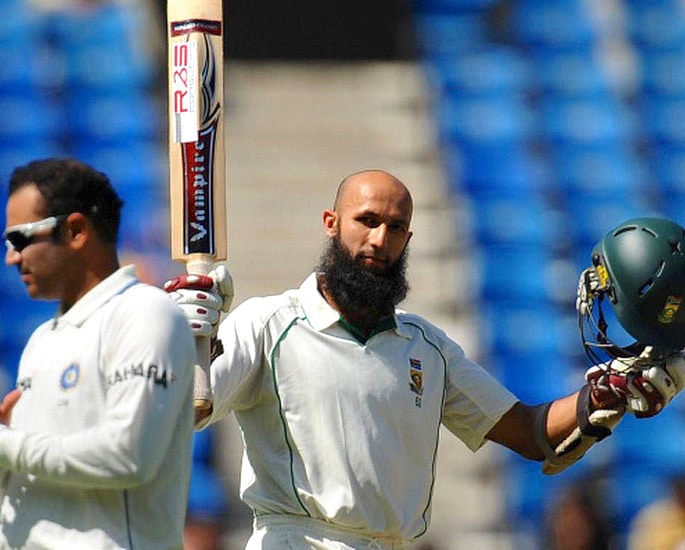 One of the best Test innings by Hashim Amla came in the first Test match of South Africa’s 2010 tour to India.

After winning the toss and electing to bat, The Proteas were wobbling at 6-2. But a 253 not out innings from Amla gave the visitors an innings victory by six runs.

To make this score and inflict an innings defeat was a great performance by South Africa.

Amla hit fifteen 4s and two 6s during this marvellous performance. Amla who was the player of the match said:

“It was one of my best knocks. It was a crucial time I came into the crease and I got the team into a great position.

“Everybody feels a bit of pressure and I am just grateful that I got an opportunity to put the team in a good position.

“I have had a few good partnerships with Jacques; once we both got in we complimented each other .. when I wasn’t scoring he was and vice versa.

The third-wicket partnership of 340 runs with all-rounder Jacques Kallis was key to their win.

A cool century knock by Hashim Amla in the second innings of the first Test was enough to give South Africa an eight-wickets win over Australia.

This crazy match taking place at Newlands, Cape Town between November 9-11, 2011 was a game of two halves.

South Africa was on the backfoot when they made only 96, in reply to the visitors 284. But the home side sensationally bowled out The Baggy Greens for 47.

Despite requiring a fighting score of 236 runs, The Proteas comfortably got to the summit. They lost only two wickets in their second innings.

Dealing mainly in boundaries, Amla made a match-winning contribution of 112 off 134 balls. Amla and opener Graeme Smith built a second-wicket partnership of 195.

The match amazingly came to a finish in three days. 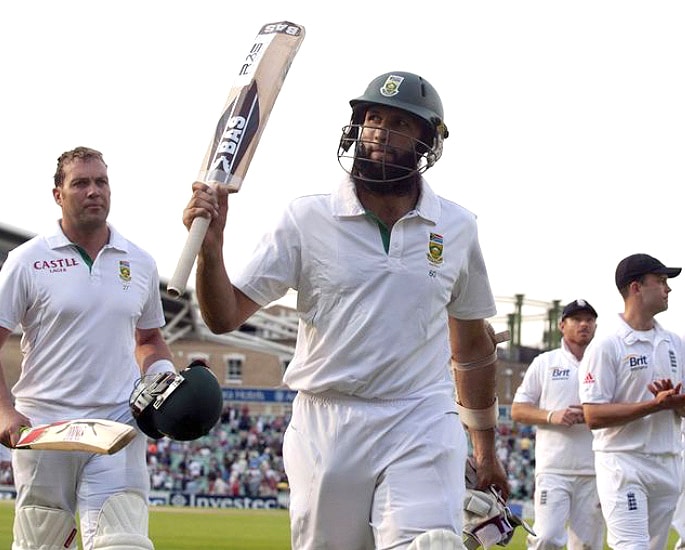 Hashim Amla became the first South African batsman to score a triple hundred in Test match cricket during their 2012 tour to England.

Amla made an unbeaten epic score of 311 in the first innings of the first Test match at Oval.

With South Africa losing their first wicket on one, Amla came to the crease at one down.

Amla was particularly destructive against English off-spinner Graeme Swann, playing him comfortably to the leg-side.

Hence, South Africa were triumphant by an innings and twelve runs.

Amla was the second cricket player to make a triple hundred at the Oval. 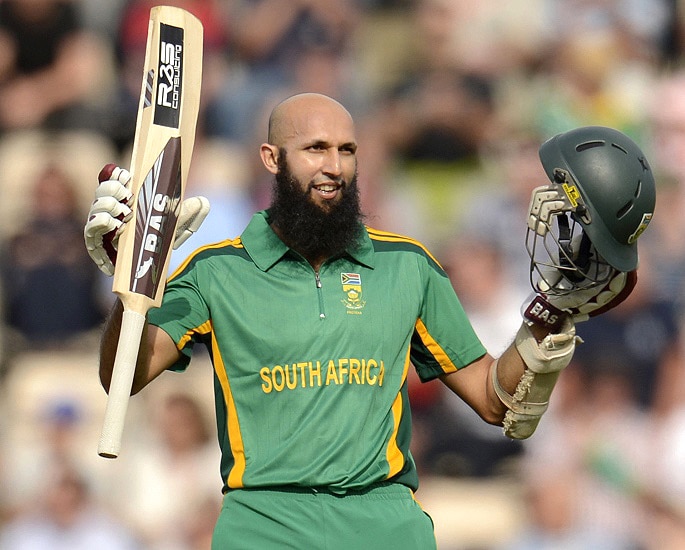 South Africa batted first in the second ODI at the Hampshire Bowl on August 28, 2012. Hashim Amla scored 150 in this match.

His innings had a strike rate of 120.96, smashing sixteen 4s. Thus, his knock was more than a run a ball.

His terrfic innings got South Africa to 287-5 in their fifty overs. With England all out for 207, The Proteas won the match by eighty runs.

Speaking about the difficult conditions and pleased with his innings, man of the match Amla expressed:

“The wicket was tough early on and it was tough to score off the spinners, the pace was down but we got our partnerships going.

“I didn’t think I would be achieving this, it’s just an honour.”

We got to see Amla accumulating runs and hitting the ball to all parts of the ground. His innings was more than half of the South African total. 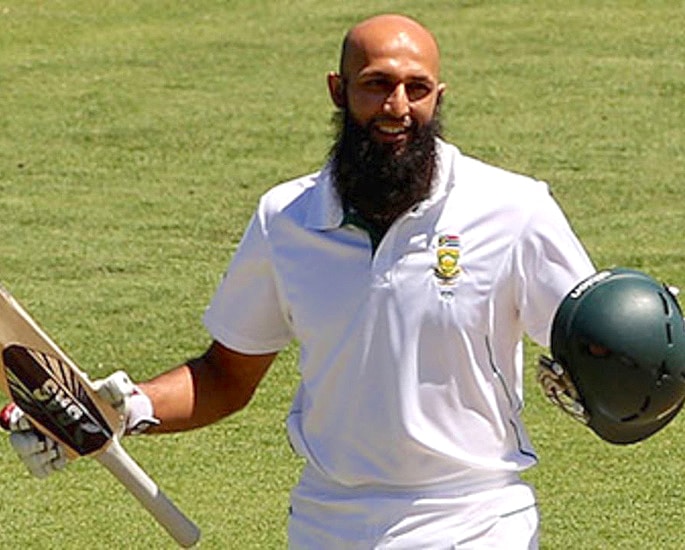 Hashim Amla once again had a massive contribution in South Africa’s triumph over Australia in the third Test down under.

The Proteas beat the home side by 309 runs at the Western Australian Cricket Association (WACA) ground in Perth on December 2, 2012.

In the second innings, Amla made 196 runs, making a partnership of 149 runs with AB de Villiers for the fourth wicket.

Amla had a brisk strike rate of 88.68, smashing twenty-one 4s in his innings. Australia fell way short of the 632 runs target, as South Africa went onto register a convincing victory.

At the post-match ceremony, the modest man of the match Amla stated:

“I’m glad to have made a contribution.”

With this win, the visitors held onto the No.1 ranking spot in Test cricket. 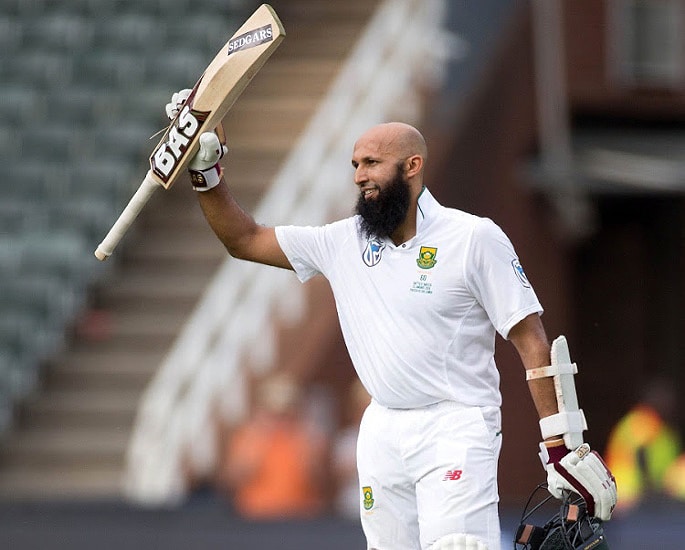 Hashim Amla led from the front as captain, scoring a crucial century on their 2014 tour to Sri Lanka.

Amla made an unbeaten 139 during the first innings of the second Test match at the Sinhalese Sports Club Ground in Colombo.

Amla’s innings was pivotal, as six South African batsmen failed to reach double figures. Batting at number four, Amla had to toil away to save his side from a big defeat.

Surviving all tests, Amla had a strike rate of 36.38, as he hit twelve 4s in his innings. On day five, the match was drawn, with South Africa escaping by the skin of their teeth.

As a result, South Africa won the two-match series 1-0.

This was The Proteas first series victory in Sri Lanka for more than twenty years.

Amla who was born to an Indian family on March 31, 1983, began his cricket career, playing for the provincial team KwaZulu-Natal Dolphins.

He went onto skipper South Africa at the 2002 Under-19 Cricket World Cup held in New Zealand.

Amla made his Test debut against India at Eden Gardens, Kolkata on November 28, 2004. He played his first ODI versus Bangladesh at the Zahur Ahmed Chowdhury Stadium, Chattogram on March 9, 2008.

Over the course of his fifteen-year career, Hashim Amla won many many matches for his country, along with receiving several accolades,

DESIblitz congratulates Hashim Amla on his wonderful career, wishing him the very best for the future.