A visit was made by Punjab’s JCT football club to the venue of Wolverhampton Wanderers FC, to build a relationship with football at its heart.

Samir Thapar, the chairman and president of JCT Football Club from Punjabi, India, visited Wolverhampton Wanderers FC as part of their exchange programme with the club. The initiative drawn up between the two clubs is to promote the game in India and give JCT support to improve their team with an insight into UK coaching and playing skills.

The venture is an excellent demonstration of what is possible to promote a mutual cause of a sport like Football, especially in a country where Cricket is the most highly regarded sport. Wolves are committed to give JCT the support and this is the start of the relationship, where both parties have now visited each others home. The visits will give a good insight into the differences and challenges faced by both parties to make this venture successful.

Without doubt the types of issues faced by JCT FC to improve their role in the game are going to be very different and more basic compared to an established  UK based Championship side like Wolves FC.  In India, a sport like football is probably on a similar level to how Basketball is perceived in the UK. Therefore, initiatives like these are very important to help awareness of the sport to increase in a country that is Cricket crazy.

DESIblitz.com had the unique opportunity to meet and interview Samir Thapar during his visit and to discuss with him the challenges he faces to promote the game of football and his team in India and abroad too. Watch and hear what Samir had to say in his interview below.

Samir reveals that the JCT team was formed in 1971 by his father who is very passionate about Football. With Samir’s love for Cricket not being major, he took on the role to become president and chairman of the team. This has led him to embark on building a strong foundation for the team and developing strategies to improve the team by forming relationships such as the one with Wolves FC. 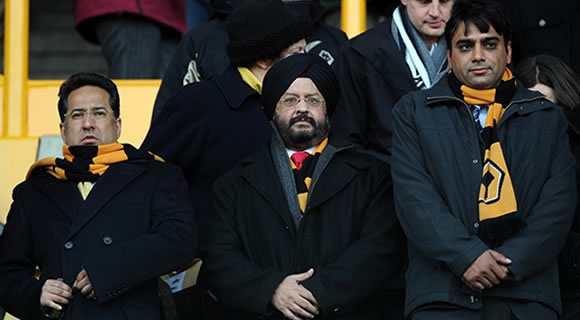 During his stay, Samir and colleagues were  invited to watch a home game between Wolves and Watford at the Molineux Stadium. A match which Wolves won 3-1, and most likely gave the Indian delegation a great insight into the huge popularity of Football as a sport and as a culture in the UK.

A special evening event on 31st January was also organised by Punjabi Wolves to honour the visit by Samir Thapar.  The Punjabi Wolves are the Brit-Asian support and fan club of the Wolverhampton Wanderers FC team. Predominately of Punjabi roots, the supporters club is dedicated to showing its support for the football club whilst being influential in race related decisions. Their support for this particular venture between JCT and Wolves was also noted by Samir Thapar, who said that the prominent Punjabi influence  was one of his reasons to form the partnership with Wolves FC compared to many other clubs that approached him around Europe. 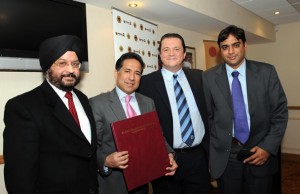 The evening with a champagne reception, entertainment and dinner, was a huge success with full support given on the night by Wolves FC’s Jez Moxey and MP Pat McFadden. Malkit Singh MBE was presented with a Wolves shirt at the event and entertainment was provided by Highland Baja, DJ Bains, Gubroo Punjab Dancers and Indian Elvis. Jenny Wilkes from BBC Radio WM and Dipps Bhambra from BBC Asian Network were  guest presenters for the night.

Acknowledgement speeches were made by Jex Moxey, Pat McFadden and Jaz Bains from Punjabi Wolves. Punjabi Wolves presented Samir Thapar with a gift to acknowledge his visit and commitment to the relationship with Wolves FC.

Samir was thankful to everyone involved in making his visit a memorable one and was very encouraged by the support for the relationship between JCT FC and Wolves FC.

DESIblitz.com especially thanks Matt Grayson of Wolves FC for his help and support. Andy Sahota and Punjabi Wolves for their continuous support.