The dream pairing of Sania Mirza (IND) and Cara Black (ZIM) have won the Women’s Doubles title at the 2013 China Open. This is Sania’s fifth doubles title of the season and second consecutive win with Black.

"I'm still in shock, it hasn't sunk in yet. This feels awesome."

The Indo-Zimbabwean pair who came into this tournament on the back of victory in Tokyo [Toray Pan Pacific Open] a week earlier had no problems against the unseeded pair of Vera Dushevina (RUS) and Arantxa Parra Santonja (SPN). They needed just over an hour for a 6-2, 6-2 victory.

It has been a phenomenal year for India’s golden girl Sania Mirza as she lifted her fifth title of 2013 and her nineteenth overall career title. Talking of her new doubles partner, Mirza said: 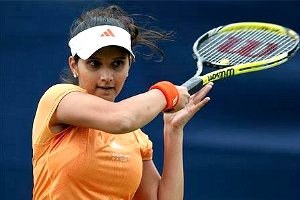 “We only started playing together last week – we try to win, of course, but we never expected to win, especially since we started at two of the biggest tournaments.”

“To play so well with a new partner and to win two titles on the trot, it doesn’t happen every day – it’s tough to top this one.”

The pairing made it two championships out of two since they joined forces by tearing their opponents Vera Dushevina (RUS) and Arantxa Parra Santonja (SPN) apart in the final.

It was a blessing in disguise as both Mirza and Black were without partners just ahead of the Asian tournaments and decided to team up.

The 26-year-old Hyderabadi explained that the last time she asked Black to partner her in the doubles two years ago, Black decided to have a baby instead, saying: “I figured that would be easier.”

The pairing came into this championship beaming with confidence after winning the Toray Pan Pacific Open in Tokyo just a week ago by beating Chan Hao-ching (TPE) and Liezel Huber (USA) 4-6 6-0 11-9, with an unbelievable comeback. 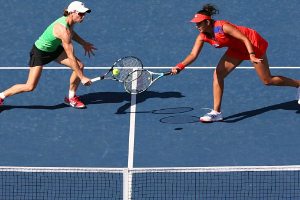 It was a tough draw for the eight seeds as they had to see off the fans favourites, Chan Yung-jan (TPE) and Zheng Jie (CHN) 6–4 6–1 in the quarter-finals, and in the semi-finals the World’s No. 1 and top Italian seeds, Sara Errani and Roberta Vinci 6-4 6-4.

The final matched them up against the unseeded Dushevina (RUS) and Parra Santonja (SPN). Mirza-Black shared a high five before splitting up to their part of the court as it was game on.

From the off-set, Black and Mirza played their game from the service line with some blistering offensive play as they purposefully hit the ball long and hard for Dushevina and Parra Santonja to chase. Mirza-Black forced their opponents onto the defensive, whilst maintaining their own composure.

The combination worked tremendously well as Black was quick to bounce on the court delivering net-service to short balls, whereas Mirza hanging back to hit powerful shots from the baseline.

The understanding of the quality and strength was there for all to see and admire as both players played off each and used it to their full advantage, leaving Dushevina and Parra Santonja mesmerised. 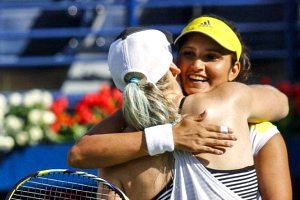 Mirza and Black’s dominance was such that Dushevina and Parra Santonja had no answer and managed to win just four games in the two sets, with their first serves in dropping from 52 per cent in the first set to just 28 per cent in the second.

The Russian-Spanish pair went from chatting after each game to complete silence. They also managed to unintentionally entertain the spectators as they both rallied and swung for the same ball in the sixth game of the second set.

The final two games saw Dushevina and Parra Santonja showing some spirit and fight as they took both games to deuce. However, Mirza and Black had such a lead it was merely impossible to come back.

The icing on the cake finally came as the winning ball bounced and both Mirza and Black jumped excitedly on the court before running to each other for a thoroughly well-deserved hug. They had just won the 2013 China Open Women’s Doubles competition, their last tournament of the year, in a blaze of glory.

After the win, Mirza said:

“This is the best finish I’ve ever had to a year. To win back-to-back tournaments that are just a level below Grand Slams feels incredible.”

“Obviously Cara has been No. 1 in the world and must have enjoyed a better run, but for me, I’m still in shock, it hasn’t sunk in yet. This feels awesome,” she added.

Cara and Sania have committed to playing together next year: “We have to sit down and work it out. We’ll train together in the off-season, most likely in Hyderabad. We’re looking forward to fine tuning certain aspects of our play,” Cara said. 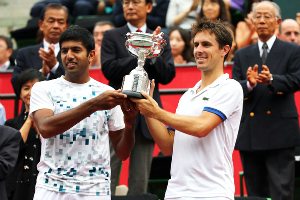 The Indo-French winning pair almost lost their first match against Juan Monaco (ARG) and Horacio Zeballos (ARG) and saved one match point in the quarter-finals against Andre Begemann (GER) and Martin Emmrich (GER), before they eventually made it to the final.

Bopanna said after the victory: “The strategy worked well today. We played as a team today. Édouard is very solid on return and puts pressure on the serve, which gives me the freedom to play my game.”

So 2013 has been a very successful year for Sania Mirza and the Sania Mirza-Cara Black team seem to be the next big thing in Women’s Doubles. With two titles and a victory over World No.1’s, Roberta Vinci and Sara Errani, they have positioned themselves firmly on the ground.

Sania Mirza and Cara Black will be hoping to dominate Women’s Doubles tennis in 2014 and even win a Grand Slam or two.

Sid is a passionate about Sports, Music and TV. He eats, lives and breathes football. He loves spending time with his family which include 3 boys. His motto is "Follow your heart and live the dream."
The Asian Football Awards 2013 Winners
Aditya Mehta creates History at Indian Open