Sania Mirza and Shoaib Malik, two sports stars from neighbouring countries, India and Pakistan, marry. A marriage that has created a media frenzy, and has shocked and pleased factions from both countries.

We are not making any statement, politically

Sania Mirza was once India’s darling. As the first Indian tennis player to make the Top 50 WTA ranking she is a youth icon in India. Now she’s attracted controversy by  marrying Pakistani cricket captain, Shoaib Malik, who was suspended for misconduct recently from the national team after their Australian tour.

The high-profile wedding took place three days ahead of the original schedule to silence the controversy and drama surrounding their marriage. Originally planned to take place on April 15th 2010, the marriage took place on April 12th. Sania,23, married Shoaib,28, at the elegant 5 star Taj Krishna hotel in Hyderabad, India. The wedding was conducted as per Muslim religious traditions. Only close family members and friends were present.  The ‘nikah’ ceremony was attended by 15 people from the bridegroom while 35 persons were present on the bride’s side. There was very tight security outside the venue.

The Mehndi ceremony for Sania Mirza, which was to take place ahead of the wedding, took on April 13th at the Mirza residence and Marfa band was organised as part of the celebrations. 15th April was the date of a star studded reception held at the  Taj Krishna hotel with many celebrities attending the party including major names from Bollywood and sport. Her Walima (reception ) takes place on April 17th in Lahore, Pakistan, where she will be received as the ‘bhau’ of the Malik family.

After Shoaib Malik went on television to declare his love for the Indian tennis superstar the news became a hot topic in the media, especially in Indian and Pakistan. The couple’s engagement became of national importance. Right wing politicians in India condemned the engagement asking why she couldn’t have found a husband from India’s millions. They stated that as a role model for Indian youth, Sania should not have agreed to marry a Pakistani. Her effigy was burnt in Bhopal, India. The BJP, a right wing Indian party, has asked her to ‘reconsider’ marrying a Pakistani. 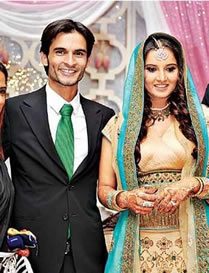 Conversely, Pakistani press declared a victory for their country welcoming Sania as ‘bhabhi’ (sister-in-law) and declaring that they also have other unmarried sportsmen. Fans danced in the streets outside Shoaib’s house in Sialkot, Pakistan.

Shiv Sena, India’s Hindu Nationalist party, have stated that Sania, who became the highest ranked Indian woman ever in tennis, can’t represent India. A Shiv Sena official wrote in an Indian newspaper, “Henceforth, Sania will not remain an Indian. Had her heart been Indian, it wouldn’t have beaten for a Pakistani. If she wished to play for India, she should have chosen an Indian life partner.” He added, “After marriage, Sania will become a Pakistani citizen. How can she have Pakistani citizenship and play for India?”

Pakistan Tennis Federation chief Dilawar Abbas wants Sania to play for Pakistan. This would be seen as disloyalty to Indians. Sania wants to continue playing for India after her marriage to repeat her success in winning the Wimbledon Championship Girls double title and Australian Grand Slam mixed doubles.

Sania said in a statement released from Hyderabad, her home town, 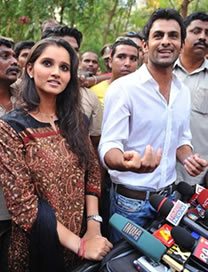 The media attention has thrown up some interesting details in the Sania Shoaib story. Sania met Shoaib in Dubai where she was playing in a tennis tournament. This was in February 2010. Only one month before in January, Sania broke off her engagement to childhood sweetheart Sohrab Mirza citing incompatibility.

It also emerged that Shoaib was embroiled in a scandal. He has been accused of marrying another Indian muslim girl over the phone. Ayesha Sidiqui alleges that she met the cricketer in Jeddah and conducted an internet romance with him. She claims she later married Shoaib over the phone because he was in Pakistan and she couldn’t get a visa.

Shoaib denies the phone marriage later stating that the girl he had met in Jeddah was a different girl to the one who had presented herself as Ayesha over the phone. He states that he has photos which prove that they are in fact two different women. Shoaib claims that the nikkah (marriage) ceremony was invalid because he was deceived of the identity of the woman. However, Shoaib had to take back his argument and file for divorce.

Indian Pakistani couples are rare and controversial. The last time a famous Indian married a Pakistani was in the 80s. Reena Roy, a popular Bollywood actress, married a Pakistani cricketer Mohsin Khan. One Indian newspaper likened it to an American gymnast marrying a Russian ballerina in the heights of the cold war. It’s unthinkable.

Relations between the two countries were never good at the best of times. There have been three wars between India and Pakistan. Kashmir remains a thorn in the side. Pakistani militants were the prime suspects in the recent Mumbai terror attacks. Indo-Pak relation remains at the level of confrontational political stances although there have been recent efforts at reconciliation with both countries providing aid for each other during the Gujrat and Kashmir earthquakes.

At a press conference prior to the marriage, Sania said, “I think we are getting married. We are not making any statement, politically.” She added,  “I just want to know how I am going to look and how my hair is going to be, rather than think how India and Pakistan political issues are going to be.” In response to a question of who she would support if India played Pakistan, she said she would support India and her husband. 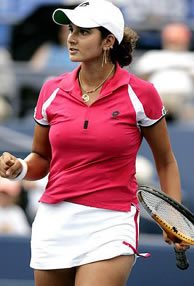 Marriages between Pakistanis and Indians do occur and there are often family links between those who left for Pakistan during Partition and those who stayed behind in India. Muslims often don’t consider national differences between Indians and Pakistanis because they are all of the same religion.

Cross border visits between Indian and Pakistani muslims pose a security risk. According to Indian sentiments, the question of loyalty in Indian muslims arises. Do they have more in common with and more sympathy for muslims in Pakistan that their fellow Indians? Shahrukh Khan’s loyalty was criticised when he made a statement in support of Pakistani players in the India-Pakistan IPL fiasco, when no Pakistani players were picked for the league.

Sania is not a stranger to controversy. As a muslim, her short tennis skirts and cropped tops drew comments from muslim sources. Her exposed flesh was criticised. She is not a demure traditional muslim girl often seen sporting jeans, fitted tops and short skirts. An Islamic scholar, Haseeb ul hasan Siddiqui, issued a fatwa on Sania because of her tennis outfits. The All India Shia Muslim Personal Law Board have condemned the fatwa calling it unnecessary however it is still an issue with many muslims.

The small affair of a simple wedding between a cricketer and a tennis player has been blown out of proportion by the attendant socio-political complications. Comparisons drawn between the engagement and Indo-Pak relations have threatened to drown the couple. They could turn into the Asian Mr and Mrs Boris Becker whose inter racial relationship became a topic of conversation in Germany.

The fact that the couple are planning to live in Dubai after the marriage is a reflection on Indian and Pakistani attitude to Indo-Pakistani couples.

S Basu wants to explore the place of Indian diaspora in a globalised world in her journalism. She likes being a part of contemporary British Asian culture and celebrates the recent flourishing of interest in it. She has a passion for Bollywood, Art and all things Indian.
Pakistani Cricketers banned
Lalit Modi and the IPL Finances Saga