Wembley Stadium hosted a glamorous night for the second annual Asian Football Awards 2013. Notable personalities from the Asian and non-Asian world gathered to celebrate the growing popularity of Asian football.

"I think the Asian community are yearning for that star. We hope the Asian Football Awards do this."

The home of football, Wembley Stadium played host to the cream of Asian footballing talent at the 2013 Asian Football Awards [AFA].

On what was only the second year that the event took place, the glitz and glamour of the occasion certainly turned a few heads.

The motto of the AFA is: “Honouring those that are paving the way for Asians in Football.” This speaks volumes for the nature of the cause, spearheaded by Baljit Rihal.

Baljit Rihal is the Founder and Director of Inventive Sports who are behind the awards ceremony. His soul aim is to raise awareness of the lack of Asian participation in football. 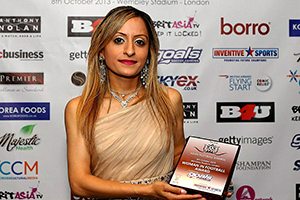 On his campaign to widen the awareness of Asian football in the UK, Rihal appeared on Sky Sports on the morning of the awards.

When prompted on role models, Rihal said: “In terms of the role model, the Messi or the Rooney, I think the Asian community are yearning for that star. It could be a matter of time. We hope the Asian Football Awards do this.”

He also touched on the famous topic of the lack of Asians in the game:

“There have been stereotypes in the past; people said that due to parental pressure people couldn’t go through, people have said because of their diet, because of their frame. If you look at the Spanish frame, the world champions, it’s quite similar to Asians.” 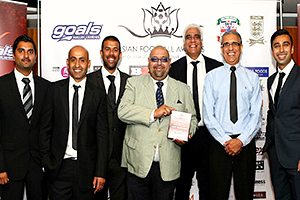 He went on to say: “The FA [Football Association] are extremely important. They have put in place, for example a diversity and inclusion plan quite recently so they are extremely key.”

Respected dignitaries from all walks of life attended the bash in great numbers.

The sold out event, in association with Goals Soccer Centres was hosted by Sky Sports Presenter Dharmesh Sheth, and Noreen Khan from the BBC Asian Network. Khan stole the fashion look of the night by sporting her footballing colours and wearing a Liverpool saree. 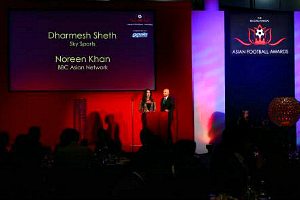 Juggy D and Honey Kalaria’s Bollywood Dance Academy provided the entertainment for the night. They rocked the event with what can only be described as a scintillating performance that had everyone dancing in their seats.

Of the many awards that were presented, some notable prizes stood out. Key achievements and recognition for services were all part of the awards ceremony.

It is no secret that Dr Mughal played a major part in saving Muamba’s life, who was clinically dead for 78 minutes.

A milestone was also achieved when Yan Dhanda was awarded the Up and Coming Player Award. Yan, who hails from Birmingham, became the first player of Indian origin to sign for Liverpool FC. The youngster has left his home comforts and is now living and studying in Liverpool as part of his development.

Liverpool’s own current Manager Brendan Rodgers said of the AFA:

“I think the awards are really important. It’s great that you can reward people for being inspirational in the community.”

Manchester United star, Shinji Kagawa was favourite to land the South-East Asian Player award. However, he was deservedly pipped to the title by Cardiff City’s Kim Bo-Kyung.

Here is the full list of winners for the 2013 Asian Football Awards:

The Asian Football Awards are being recognised on a wider scale. It is events like this that will inspire players, coaches and most importantly, the South Asian community to embrace football as a serious and viable career option.

The awards will return next year, on a bigger scale no doubt. Perhaps at the 2013 AFA, we may just have seen the future of English football get some practice into lifting trophies. A huge congratulations from DESIblitz to all of the winners of the 2013 Asian Football Awards!

Rupen has been passionate about writing since childhood. Tanzanian born, Rupen grew up in London and also lived and studied in exotic India and vibrant Liverpool. His motto is: “Think positive and the rest will follow.”
Mumbai Indians win T20 Champions League 2013
Sania Mirza wins Fifth Title of 2013