The Bollywood award season kicked off with the prestigious Zee Cine Awards 2013, which took place in Mumbai on the 6th January.

Abhishek Bachchan and Riteish Deshmukh hosted the show, entertaining audiences at the event

The 14th Zee Cine Awards 2013 brought together a spectacular line up of stars from the Bollywood film fraternity, celebrating a remarkable year for Hindi Cinema in 2012.

After a gap of ten years, the Zee Cine Awards was back in its hometown Mumbai. Prior to this several countries had hosted the event including United Kingdom, Malaysia, UAE, Singapore and Mauritius.

This year the Zee Cine Awards yet again proved to be a huge success, recognising individual and collective achievements from the film industry. The show brings together actors, directors, music composers, writers, technicians, vocalists and choreographers all on one platform.

The awards ceremony this year consisted of fifteen separate categories. Members from the film fraternity were nominated into different categories, some nominated in more than one. 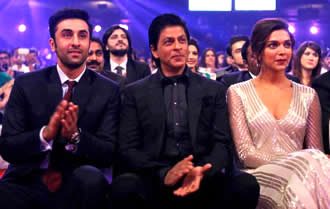 Abhishek Bachchan and Riteish Deshmukh hosted the show, entertaining audiences at the event. The duo came together for the first time since their semi-hit film Bluffmaster, released in 2005.

This platform marks Abhishek Bachchan’s debut as a host at an awards ceremony. He expressed: “I’m very happy to be a part of Zee Cine Awards this year. I’m going to be hosting the show along with my friend and brother, Riteish Deshmukh this time.”

The Zee Cine Awards also featured some spectacular performances from the stars. Some of the highlight performances were from Shahrukh Khan, Anushka Sharma, Katrina Kaif, Ayushmann Khurrana and Varun Dhawan.

Ayushmann Khurrana performed on stage and enthralled audiences with songs from his debut-hit film Vicky Donor [2012]. He also performed classic and contemporary melodies such as ‘Jumma Chumma Dede’ from the Amitabh Bachchan starrer Hum [1991] and ‘Pandeyji Seeti’ from Dabangg 2 [2012]. 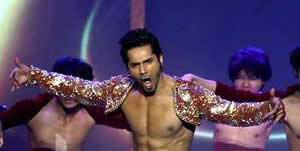 The audiences went wild when Student Of The Year [2012] star Varun Dhawan made a surprise entry, when Ayushmann performed the song ‘Vele’. Varun sizzled on stage when he flaunted his much talked about six-pack to the audience.

Anushka Sharma dazzled the audiences by dancing to songs from her recent film Matru Ki Bijlee Ka Mandola [2013]. She also danced to the popular song ‘Laung Da Lashkara’ from her film Patiala House [2011]. 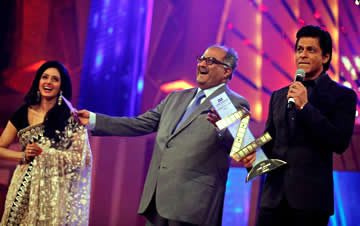 A major highlight of the event was a tribute to legendry filmmaker Yash Chopra, led by Shahrukh Khan. Anushka Sharma, Katrina Kaif and Karishma Kapoor joined him in this tribute performance. They performed songs from Silsila [1981], Dil To Pagal Hai [1997] and Jab Tak Hai Jaan [2012].

The late Yash Chopra requested that his nomination for Best Director be removed. This was because he wanted other filmmakers to receive the award. Respecting his wish, the channel removed his nomination.

The fashion icon took to twitter to express his joy at seeing his costumes on stage. He said: “I love designing costumes for stage, they have to be specially constructed.”

Here are the winners of the Zee Cine Awards 2013:

BEST ACTOR IN A SUPPORTING ROLE [OTHER]
Nawazuddin Siddiqui – Talaash

BEST ACTOR IN A NEGATIVE ROLE [OTHER]
Rishi Kapoor – Agneepath

SONG OF THE YEAR [MUSIC]
Radha – Student Of The Year

A huge congratulation goes out to all the winners at the Zee Cine Awards 2013. The award ceremony celebrated the phenomenal year Bollywood had in style and elegance.

It opened the award season of 2013 tremendously and set the standards extremely high for other award events to follow.

Faisal has creative experience in the fusion of media and communication and research which increase awareness of global issues in post-conflict, emerging and democratic societies. His life motto is: "persevere, for success is near..."
1980s Bollywood Beauties
58th Filmfare Awards 2013 Winners