Bollywood’s biggest names were out in full force at the 8th Renault Star Guild Awards in Mumbai, India. Salman Khan made his award hosting debut too!

The highlight of the night was host Salman Khan who looked very dashing in a black suit.

Talking to reporters on the red carpet, a tense Salman Khan said: “Everybody gets nervous when you do something for the first time, even I am nervous, I just thought… let’s try… how it feels to host (such functions). It is a very difficult thing, you have to remember many things, listen properly to others and not get carried away.”

Although Salman Khan was presenting for the first time at an awards ceremony, he did not fail to entertain. The stars took to twitter to praise him for his work on the night.

Singer and VJ Sophie Choudry tweeted: “Still laughing from all the antics [you] got up to as the host of the Screen Guild Awards last nite!Full Madness/Masti SK style!” 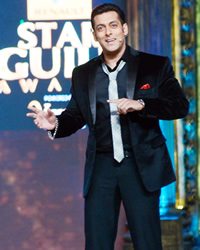 “Had a fab time with Salman at the Star Guild Awards, it’s always a pleasure interacting with him,” tweeted Arshad Warsi.

The 8th edition of the Star Guild Awards were jointly organised by the Film and Television Producers Guild and Wizcraft International Entertainment. The event produced by the Star Network will be aired on 24th March 2013.

The big winners for the night included films Vicky Donor [2012] and Barfi! [2012], raking in a total of thirteen awards for the night. Musical goddess Lata Mangeshkar received the ‘Nightingale of the Century Award’ for her outstanding contribution to playback singing.

Many of the stars performed hit songs on stage, including Jacqueline Fernandez dancing to this year’s super hit film Race 2.

Veteran actor, producer and director Manoj Kumar received the prestigious ‘Lifetime Achievement Award’ for his contribution to India cinema. He acted in many classic movies such as Upkaar [1967], Shor [1972] and Roti Kapda Aur Makaan [1974].

Actress turn singer Priyanka Chopra took home the ‘Special Female Star of the Year’ award for Barfi! [2012] and Agneepath [2012]. The actress had an amazing year releasing her new single In My City featuring will.i.am and two hit films. While she deserved the award, there were many who felt Sridevi should have been considered for her brilliant performance in English Vinglish [2012].

“Thank you Apsara for the star of the year award. It means a lot because its the film fraternity. Thank u to the teams of Agneepath and Barfi!” 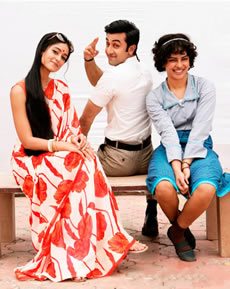 Fashion was the main topic of discussion with celebrities glamming up to impress everyone on the night. All the major designers managed to get their hottest looks on the red carpet.

There was no doubt that Anushka Sharma was the most stunning that night. She wore a pink and black embroidered sari designed by none other than Manish Malhotra.

Vidya Balan looked beautiful in a purple sari created by Sabyasachi Mukherjee. Her favourite designer again worked his magic and made her signature style perfect.

Golden legends Hema Malini and Sridevi both proved that age is nothing but a number when it comes to glamour. Hema Malini wore an elegant white sari with heavy embroidery. A dazzling Sridevi picked a red, black and white kurta/lehenga designed by Sabyasachi.

The highlight of the night was host Salman Khan who looked very dashing in a black suit. His co-host Sonakshi Sinha looked amazing in a white embroidered anarkali created by Abu Jani Sandeep Khosla.

Winners of the 8th Renault Star Guild Awards are:

Arun is a creative person who lives and breathes the world of Fashion, Bollywood and Music. He enjoys spending time with family and friends and loves a bit of banter. His life motto is: "You only get out of life what you put into it."
Akshay’s brilliant act in Special 26
Aishwarya adores Aaradhya Bachchan