Winners of the 2015 Star Guild Awards

The Renault Star Guild Awards took place on January 11th, 2015. PK and Mary Kom were big winners of the ceremony. Find out who won what here.

Shahid Kapoor won the ‘Best Actor in a Leading Role (Male)’ for Haider.

A glamorous evening, the Bollywood stars came out in full force to celebrate the next big ceremony of the awards season.

The Star Guild Awards was hosted by popular Indian comedian, Kapil Sharma whose hilarious quips and interaction with the stars made it an enjoyable night. 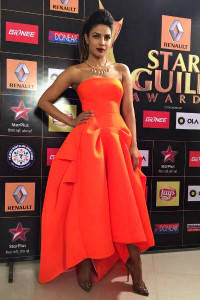 There were also huge performances from the big names themselves, including Amitabh Bachchan who was promoting his upcoming film Shamitabh.

Honoured for his excellent portrayal of a young and disturbed Shakespearean hero, Shahid Kapoor won the ‘Best Actor in a Leading Role (Male)’ for Haider.

Sadly, Shahrukh Khan’s Happy New Year and Salman Khan’s Kick did not get much of a look in against Aamir’s PK.

Abhishek won the ‘Best Actor is a Supporting Role (Male)’ for his hilarious character in HNY which many believed made the film.

PK however took ‘Best Film’, ‘Best Director’, and ‘Best Dialogue’. Hrithik Roshan also honoured his father Rakesh Roshan with a ‘Lifetime Achievement Award’, while the ‘Hindustan Times Celebrity for a Cause’ was given to Priyanka.

Here is the full list of winners of the Star Guild Awards 2015:

Best Actor in a Supporting Role (Female)
Tabu for “Haider”

Hindustan Times Celebrity for a cause
Priyanka Chopra

Entertainer of the Year
Deepika Padukone

The Renault Star Guild Awards 2015 will be aired on Star Plus on January 18th, 2015. Congratulations to all of the winners.

Aisha is an editor and a creative writer. Her passions include music, theatre, art and reading. Her motto is “Life is too short, so eat dessert first!”
PK becomes Highest Grossing Bollywood film ever
Dabboo Ratnani Calendar 2015