The crème de la crème of Indian cinema gathered on January 31, 2015 to celebrate the 60th annual Britannia Filmfare Awards. Who won what? Find out here.

"I don't know what to say. Thank you for dealing with me and my tantrums."

Anticipation for the 60th Britannia Filmfare Awards has been bubbling since the beginning of 2015.

With some hot contenders on the nominees list, Bollywood arrived in full force to witness who would take away the prestigious ‘black lady’.

The show was hosted by TV comedian Kapil Sharma and the director of romance, Karan Johar. A perfect comic duo, the pair entertained throughout the night with their hilarious gaffs and spoofs. 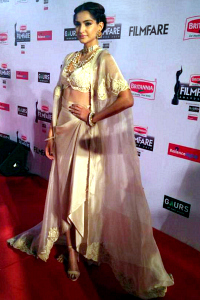 Karan even managed to get a few words out of Alia about her marriage prospects during backstage rehearsals.

The adorable actress admitted she wouldn’t mind going for Kapil, saying: “If I can adjust with Randeep Hooda, I can manage with Kapil Sharma too.”

Kapil was of course over the moon by her comment, and later arrived on the red carpet with a full baraat in tow celebrating with a ‘band baja’. Alia later won Best Actress (Critics) for Highway. She said:

“I don’t know what to say. Thank you Filmfare and Imtiaz for giving me ‘Highway’. Thank you for dealing with me and my tantrums.”

On the red carpet the stars sizzled in their finest designer wear. Sunny Leone looked stunning in a black floor length gown with her hair in a classic chignon.

The actress admitted that she was hoping Priyanka would take the ‘Best Actress’ award, saying: “I am rooting for Priyanka Chopra for Mary Kom.”

Style diva Sonam Kapoor looked gorgeous in a traditional off-white piece: “I am happy to be nominated. This is my fourth nomination and I am happy that I am here.”

Co-star Fawad Khan, already lovingly dubbed Prince Charming, took the award for Best Debut (Male) for his role in Khoobsurat. Ecstatic at his win, he said:

“My message to fans would be, you guys are the instrument of my success. It is beautiful to get love from people in India and Pakistan.”

Tiger Shroff lost to the Pakistani actor, but his co-star Kriti Sanon from Heropanti took the award for Best Debut (Female).

Haider was a big winner on the night with both Tabu and Kay Kay Menon taking the awards for Best Supporting Actor. 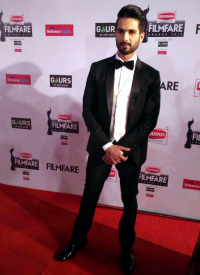 Shahid arrived on the carpet looking as dapper as ever in a black tux. On the red carpet, when asked about his favourite Filmfare moment, Shahid said:

“It was for winning my first Filmfare for my debut film. You can never have enough of them (the black lady). Looking forward to the night.”

But it was Queen that was deemed the Best Film of 2014. The story of a young woman from Delhi on a journey to rediscover herself was applauded by audiences and critics alike. Vikas Bahl also took the award for Best Director. while Kangana Ranaut won Best Actor (Female).

Here is the full list of the 60th Britannia Filmfare Awards 2015:

The 60th annual Filmfare Awards celebrated some of the best films of 2014. It is clear that Indian cinema continues to break boundaries, and 2015 will no doubt be another exceptional year. Congratulations to all of the winners!