The Filmfare Awards red carpet always attracts just as much attention as the award winners. DESIblitz finds out who turned heads and who made us gasp in 2015.

The Filmfare Awards continues to be the spotlight for the coolest fashion and latest styles.

As the 60th Filmfare Awards 2015 returned with a bang on January 31, 2015, Bollywood gathered in Mumbai to celebrate the talents and masterpieces of Indian cinema.

Flaunting their designer suits and twirling in their statement gowns, the “Who’s Who of Bollywood” dressed to impress at the extravagant event.

Who stole the limelight? Who shocked and awed? Who got it embarrassingly wrong?

DESIblitz presents the Best and Worst Dressed ladies and gents at the 2015’s Filmfare Awards.

Who better to kick off the list than the reigning queen of Bollywood herself? After setting box office records with Happy New Year (2014), Deepika ruled the red carpet in a stunning Ashi Studio gown.

Pairing it up with some white pumps, dark red lipstick and elegant braids updo, Deepika looked as classy as ever. She was no doubt one of the best dressed women of the night.

This 21-year-old fashionista is no stranger to best-dressed lists. And she did it again at the Filmfare Awards.

Gracing in a black and beautiful gown and accessorising with draping earrings, the young superstar delivered a show-stopping look effortlessly.

A best-dressed list would not be complete without the ‘queen of fashion’, who is known to be experimental with her style.

Dressed in a cream coloured blouse and skirt by Anamika Khanna and accessorised with Sunita Kapoor, Sonam grabbed some criticism for her open toed shoes.

But that was hardly a setback as she brought a different and daring look to the red carpet. Like always, the Bollywood diva hit bullseye.

Sophie is a welcome surprise on the list. While she seems to have a poor choice in film projects, the British Indian actress has an undeniably good eye for fashion. Her Monisha Jaising’s off-the-shoulder dress struck all the right notes.

Last but not least was Ileana in an Nikhil Thampi outfit. Her plunging neckline and black cape had all the right ingredients for the perfect outfit for a starry night. Paired with simple earrings, the actress was a hit on the red carpet. 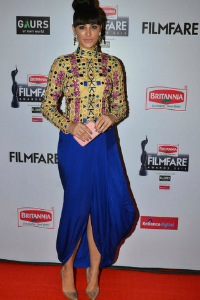 Dressed in Sonaakshi Raaj, the international beauty decided to contrast her multi-coloured blouse with a pair of bright blue trousers.

Covering her face with a fringe did not seem like a good idea either.

Another star who disappointed audience was Tanishaa who impressed in the wrong way.

A leather black dress with a dash of yellow was not exactly a heavenly combination. Yuck.

Having started 2015 with a bomb at the box office, this young and handsome star definitely knows how to top the fashion list.

Taking after his fashionista cousin Sonam, Arjun stunned in an emerald tuxedo by Ashish N Soni. We loved it, and so did the ladies on the night!

Having swept up all the Best Actor awards this year, Shahid has won the hearts of fashion critics as well.

Suited up in a black tuxedo by Kunal Rawal and pairing it up with black pumps and retro hairstyle, Shahid stole the show once again looking classy and sexy.

‘Sabki aan, sabki shaan Sabka ek bhai-jaan.’ Whatever Salman Khan wears becomes a headline. So how can we leave the tiger of Bollywood out of this list?

Looking as phenomenal as ever in an Ashley Rebello dark suit, Salman’s red carpet presence could still give the young stars a run for their money.

The dashing actor was all smiles in his white Emporio Armani suit. The Badlapur (2015) star complemented his monotone suit with black shoes and a black tie.

Carrying himself with such ease and class, Varun is definitely an actor who is here to stay and not afraid make a statement with his fashion style.

Having played a regal and charming prince in Khoobsurat (2014), the Pakistani heartthrob is on a mission to embody that lady-pleasing image.

Dressed in a grey three-piece suit, Fawad had the ladies going ‘ahh’ everywhere he went that night. The ladykiller had never looked more striking in a Dior suit, Armani shirt and Dolce & Gabbana shoes. 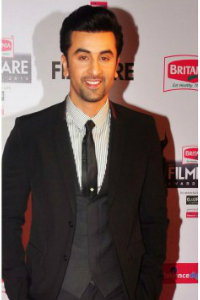 The big disappointment had to be Ranbir Kapoor, who attended his first award event of 2015.

While we expected a refreshing look from the actor, he turned up in a conventional white shirt and black tie.

Such lack of energy and originality could only yield a nay from us, Ranbir.

When it comes to fashion, the men of Bollywood are in no way behind the glamorous actresses in making a fashion statement.

This is why the Filmfare Awards continues to be the spotlight for the coolest fashion and latest styles year after year.

There you have our verdict of the actresses and actors who ticked all the right boxes and who forgot what fashion was all about at the 2015 Filmfare Awards.

Catch the televised broadcast of the 60th Filmfare Awards, hosted by Karan Johar and Kapil Sharma on February 8, 2015 at 8pm on Sony TV Channel.