The Aashni + Co Wedding Show brought some of India’s most sought after fashion designers to London, including Manish Malhotra, Sabyasachi and many more. DESIblitz was there to capture it all.

"Fashion is very personalised and one should wear what looks good on your own body.”

The Aashni + Co Wedding Show presented the fashion houses that make decadent bridal dreams come true. They are India’s finest couture designers and are the first point of call for several A-list celebrities.

The grand exhibition, held on January 25, 2015 at the Ballroom at The Dorchester, Mayfair, was the go to destination for many keen fashionistas.

This included stylists and brides who did not hope to have the celebrity bridal look without having to go all the way to India to find it.

Manish Malhotra showcased a collection that was an exquisite mix of mirror work and handcrafted Kashmiri work.

The number of Bollywood celebrities that Manish has dressed is countless, but when DESIblitz asked him who stands out for him in particular, he told us: 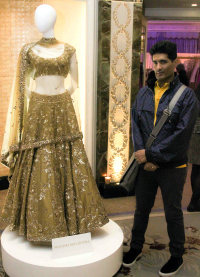 “It has to be Sri Devi as we’ve had a long association and it’s been important for my career. It’s also fun to style Kareena and Karishma Kapoor who are my good friends. A turning point in my career though was styling Urmila for Rangeela.”

The silhouettes combine western notions of cut, construct and finish whilst using Indian heritage and craftsmanship.

When asked about which celebrity looks stood out for him, he mentioned Jemima Khan’s wedding ensemble, and when both Sonam Kapoor and Deepika Padukone have worn his saris.

Sabyasachi brought his latest couture containing various patchwork with gorgeous embellishments on a vibrant colour palette. This was inspired by Firozabad in UP:

“It is where you get old and antique textiles. I wanted to give the Mughal look with cosmopolitan feel,” Sabyasachi told us.

His favourite from the collection was a red and white sari: “It has the traditional Bengali colours with a unique twist. Kareena Kapoor actually wore this same piece when she met Narendra Modi.” 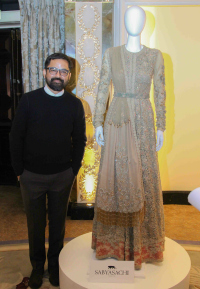 Interestingly, Sabyasachi mentions that many of the designs at the exhibition were once adorned by celebrities, including the likes of Madhuri Dixit and Kareena Kapoor.

Varun Bahl brought a ‘mix of old and new’ with a collection spanning his 10 years of experience in the industry:

“I love the use of georgette, hand woven fabric and embroidery. The ivory pieces are particularly my favourite as it is a very classy colour.”

His collection contains a generous use of exotic motifs and rich luminous tones like old rose, fuchsia and reds reflecting luxe glamour. He also revealed that Marni is one of his favourite western designers.

Arpita Mehta said that her collection extended more than just catering for the bride: “It’s for everyone: bride’s sister, mother, all of her family,” she says.

Anushree Reddy’s collection featured elaborate silhouettes brewed with lots of net, florals and subtle vintage work. Pallavi Jaikrishan’s collection had several ‘happy colours of the tangerines and red’, and her USP was that many of her outfits were incredibly lightweight. 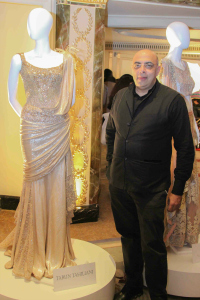 With the clientele of this exhibition varying to those back in India, DESIblitz asked the designers whether they felt there was any difference between what the British Indian bride and what the Indian bride wanted.

However, Sabyasachi said: “British Indian brides are cosmopolitan, well-travelled and have access to both eastern and western designers and therefore like to have a balance between the two.”

Many of the designers at the Aashni + Co Wedding Show believed that Indian bridal fashion is changing: “Indian fashion is becoming more global and people are accepting Indian fashion as part of mainstream fashion,” Sabyasachi told us.

Anushree said that there is now a ‘greater use of western silhouettes’, and similarly Tarun Tahiliani believed:

“We’re moving away from the very traditional colour palette for Indian bridal clothes. There’s a greater variety of colours, textures and layering. Every bride wants to be more unique.”

Along with the clothing designers, there were also makeup artists, florists, cake makers and photographers present to meet the other needs of bride and grooms planning their big day.

Tamara Al Gabbani, a Dubai based fashion designer and personality came to represent ‘Jaipur Gems’. When DESIblitz asked her about her own fashion inspirations and her style motto, she said:

“My inspirations include Queen Rania, Victoria Beckham and Eva Mendes. I believe that style is an extension to your own personality.” 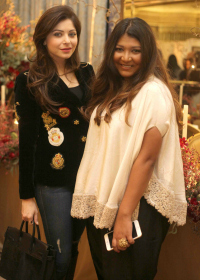 Kanika Kapoor, the voice behind super hits like ‘Baby Doll’ and ‘Lovely’, came as a guest to the wedding show.

She revealed that she looked forward to the wedding show because many of the designers there were her friends, particularly Manish Malhotra:

“I absolutely love wearing saris. Fashion is very personalised and one should wear what looks good on your own body.”

Organiser of the show, Aashni Shah, revealed: “I’m delighted to be presenting to the UK some of India’s most coveted designers. It is time people stopped travelling all the way to India to find their wedding outfit – we wanted to bring the best of India’s bridal to our doorstep.”

Since 2012, Aashni + Co has carved a niche for itself as one of London’s most sought after destinations for luxury Indian fashion and it again catches the public’s eyes through such a lavish and successful wedding show.