The Filmfare Awards is one of the biggest ceremonies in India, but it’s not just about the accolades. As always, fashion is at the forefront of any red carpet event. So who made DESIblitz’s best dressed list? And who should have stayed at home?

"Priyanka Chopra was by far the winner and best dressed of all at the Filmfare Awards 2014."

The 59th Filmfare Awards 2014 has come and gone, and Bollywood’s most talented actors, actresses, directors and producers all gathered together to celebrate some of Bollywood’s best talents.

But it isn’t just the talent that everyone is talking about; the glitz and glamour of the anticipated Filmfare Awards is all in the fashion.

Who wowed, who shocked and who made you cringe? The biggest award ceremonies require eye-catching and glamorous attire. Stars plan their outfits way in advance, but it seems that some may just throw on whatever they can find before running out of the door.

DESIblitz has compiled a list of the best dressed Bollywood stars at the Filmfare Awards, both the men and the women.

Ranveer’s daring style was much more impressive than the oversized stripped suit he wore at the Filmfare nominations. This printed floral laid back tux complimented the navy trousers along with his velvet loafers and slicked back hair. This look was very bold but it certainly paid off and we salute Ranveer as being the best dressed male on the night.

Farhan Akhtar was another Bollywood stud that dared to be risky with a dark camouflage blazer, navy blue shirt and trousers and a black velvet bow tie. We love the clash of fabric; the satin with the velvet works great, and the leather pointed shoes finishes this look off perfectly.

Amitabh Bachchan never seems to get it wrong – he’s aging gracefully as is his sophisticated style. A simple suit with a printed tie and not to forget his signature glasses made this classic Bollywood actor automatically qualify into our top 5 list. 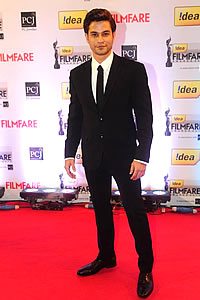 Shahid Kapoor wore a well fitted black tux with a bow tie and maroon pocket square. His locks looking more luscious than ever and his cleaned up beard, Shahid took shabby chic to a new level.

Finally, young actor Girish Kumar stood out with his very stylish father on the red carpet. Girish also wore a black tux and paired it with a silver pocket square, it was a safe look for the night but we can’t fault this classic look.

Kunal Khemu and Nawazuddin Siddiqui are just some of the Bollywood men who unfortunately lacked in wowing on the red carpet by playing it super safe.

Raj Kumar Yadav also played it safe in a grey suit, grey shirt, grey tie – just far too much grey for our liking.

We’re also not too keen on Anurag Kashyap who wore an all brown suit with everything matching from shoes to the lining of his jacket.

Salman Khan didn’t impress either with his shiny blue attire and flared trousers, it’s a big no from us, we’re afraid.

Host, Priyanka was by far the winner and best dressed of all at the Filmfare Awards 2014. The Bollywood bombshell wore a flattering figure-hugging strapless black peplum gown with gold detailing by Alexandra McQueen. Simple, yet utterly stunning.

Dips wore a half sheer and half metallic piece by Gaurav Gupta. With matching gold heels, her hair curled to one side and red lips, this star took a daring leap but it paid off and she looked outstanding.

Stunning Shruti wore a black halter-neck number by Gauri and Nainika, with long earrings and a high bun. She kept it simple but she looked marvellous with an added pop of colour on her lips.

Tamannaah looked absolutely gracious in a red Gauri and Nainika gown, hair up in a quiff, smokey eyes and glossy lips.

Divya wore a traditional Anarkali dress; a pretty yet simple gold, black and nude dress with a gold statement necklace and hair pinned up – elegance personified.

We wish Dia Mirza could have made the top 5, her outfit was perfect but the shoes and the bed hair just didn’t do it for us.

Karishma Kapoor wore a gold number by Anamika Khanna Coutre, and while this outfit had potential, there was just far too much detail and the shape did not flatter her figure. 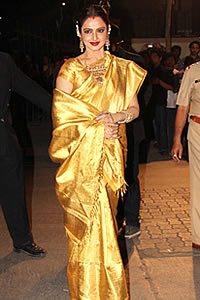 After being off the scene for a while, Kajol also made her comeback. After giving birth, she looks breathtaking, but unfortunately her floral one shoulder dress looked more like a throw-over worn at a beach party and really didn’t suit the occasion.

No one could doubt that Rekha looked stunning in a gold traditional saree, this Bollywood classic doesn’t look a day over 30! Although a little outdated, this outfit did do her justice.

It’s probably easier for women to make a fashion faux pas than it is for men and these awards were full of many bad frocks that should have never made it onto the red carpet.

This year’s Filmfare Awards saw a lot of frilly frocks as Huma Qureshi, Anjana Sukhani and Preity Zinta all attempted to rock the frills, however for most, this look was pretty unflattering.

It’s not only the men who play it safe either; Amrita Rao wore a Payal Singhal peach, black and gold saree, and although it was nice, it had no wow factor. Ileana D’ Cruz also kept it safe in a black Emilio Pucci gown.

Sometimes though, playing it safe can work wonders, simplicity if done right definitely ticks all the boxes. Black is after all a classic and Pallavi Sharda looked fabulous in a black piece by Allen Schwartz.

There were many that could have made the worst dressed list, and many that just missed the best dressed list. Award ceremonies and red carpet events are the spotlight for the on-trend Bollywood stars, and big and small screen stars throw on their best outfits in a bid to outshine each other.

Priyanka Chopra and Ranveer Singh by far are our best dressed; they are on trend, stylish and great risk-takers. And although they may not always pull it off, at this year’s 59th Filmfare Awards they outshone everyone on the red carpet.

Wanderlust at heart, Fatimah is passionate about everything creative. She enjoys reading, writing and a good cup of tea. Her life motto is: “A day without laughter is a day wasted,” by Charlie Chaplin.
Priyanka Chopra at GUESS in London
Highlights of India Kids Fashion Week