Priyanka Chopra at GUESS in London

Visiting London’s GUESS store for the launch of her new single, ‘I Can’t Make You Love Me’, Bollywood icon Priyanka Chopra has become an international star in her own right.

"I have my new single coming out in March, it’s a remake of Bonnie Raitt’s 'I Can't Make You Love Me'."

The beautiful Bollywood bombshell, Priyanka Chopra, made her much anticipated visit to GUESS’s flagship store in London’s Regent Street on January 20, 2014.

The international actress and singer was made the American brand, GUESS’s first South Asian model in 2013. Seeing it as an ‘honour’, Priyanka chose the flagship store in London to launch for her new music single, ‘I Can’t Make You Love Me’.

Priyanka’s love for London was made very apparent throughout out the day: “I keep coming to London and keep seeing you all. It feels really great that all of you have come here to see me. Thank you all so much!” 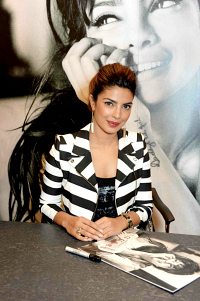 Caroline Flack was the guest DJ at the GUESS Loves Priyanka show. Star of the show, Priyanka bumped heads and posed with UK celebrities David Gandy, Pixie Lott and Eliza Doolittle to name just a few.

Sporting a casual smart black and white jacket, printed black top with Jeans, Priyanka also signed autographs for her eager fans who had been standing outside waiting for the B-town beauty as early as 8 am.

Priyanka later changed into something more elegant, a light pink satin bralette dress for the VIP dinner at the London Edition Hotel.

Covered in a fur bolero, round patent high heels, and her hair worn in loose curls, the stars body-hugging look for the night was both glamorous and effortless.

The show was a success, tweeting about it Priyanka said: “Thank U all for coming to the @GUESS store! Was so amazing to feel all the love… I’m grateful… Thank u all at Guess too!!”

She added: “Love and laughter!! Awesome meeting u lot!!” as she tweeted images of the launch with her fans. 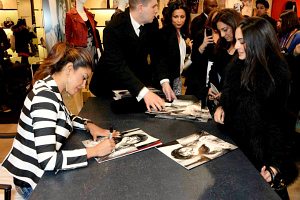 Priyanka admitted that one of her biggest achievements so far was being the ‘first brown face of GUESS’. Anjula Acharia Bath the CEO of Desi Hits! said about the launch:

“This is such a proud moment, not only as Priyanka’s management, but as a fellow woman of Indian descent.

“As the face of GUESS, Priyanka has managed to do so much more than serve as a beautiful face for a massive brand.

“She’s changed the idea what the girl next door should look like and has managed to make brown girls relevant. Many thanks to GUESS for a wonderful evening and for making the world just a little but smaller.”

Discussing her latest projects, Priyanka says: “I’m working on a few projects right now. I have my new single coming out in March, it’s a contemporary remake of Bonnie Raitt’s ‘I Can’t Make You Love Me’. 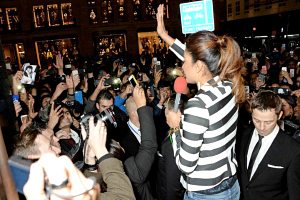 “I’m also working on three films – the first is called Gunday, the second is called Mary Kom, and the third film is untitled.”

With a whirlwind 2014 ahead of her, this international star first came to our attention when she won Miss World in November 2000 at the tender age of 17.

Rising her way up from there, she has gone on to become one of the most well-loved Bollywood figures of the 21st century.

Now she is the new face of GUESS, starring in the GUESS Holiday 2013 campaign which was shot by Bryan Adams, and Priyanka looked very Claudia Schiffer with her 60’s big hair style.

Creative Director of GUESS, Paul Marciano, insisted: “Priyanka’s confidence, strength and sensuality reflect the qualities I always look for in a model.”

“Priyanka reminds me of the young Sophia Loren and the top actresses of the 1950’s. Choosing Priyanka reinforces our celebration of multi-talented, dynamic and accomplished women.”

Priyanka’s undeniable success has seen her dabble in to a bit of everything. Before her launch in London the star was in California shooting a commercial and tweeted: 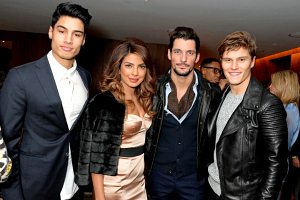 “Filming a commercial is so different to film.. Gotta tell a whole story in 30secs!!” She is also hosting the 2014 Filmfare Awards in Mumbai.

This busy star has truly found her calling. Being one of the very few Indian stars to be signed to an international label, this is sure to boost her career even further.

Some big stars who have found success being signed as ambassadors for global fashion labels are; Aishwarya Rai Bachchan for L’Oreal and Shahrukh Khan for Tag Heuer.

There is a big future ahead of this Bollywood beauty, and here at DESIblitz we are eager to see what’s next in line. Be sure to catch Priyanka’s new film Gunday  on February 14, and her new single in March.

Wanderlust at heart, Fatimah is passionate about everything creative. She enjoys reading, writing and a good cup of tea. Her life motto is: “A day without laughter is a day wasted,” by Charlie Chaplin.
Danish Wakeel a Rising Star in Fashion
Best Dressed at the 59th Filmfare Awards