Taking a cue from the West, the Indian fashion industry has recreated the concept of kid’s fashion. The two-day Kids Fashion Week saw some of the biggest designers and the smallest fashionistas strut their stuff on the runway.

"Many youngsters were given the freedom to walk the ramp however they chose."

Fashion has become a big focus in India for many years now, so it’s about time that the attention shifted to the younger generation.

With many celebrity children becoming fashion icons in the Western world, India has definitely stepped up to the mark.

Dozens of children walked the ramp in their fashionable attire, with celebrities at their side promising a fantastic start to the two-day extravaganza. 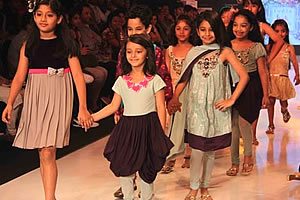 Some of the big names from the Bollywood industry were Vivek Oberoi, Neil Nittin Mukesh, and South Indian star, Tamannah, who joined the stage to give the youngsters a helping hand in strutting their stuff on the catwalk.

Not only did the show provide a platform for children’s clothing but it also united the role models with the younger generation.

Nishka Lulla’s collection focused on ‘children on the go’, her travel collection included soft comfortable fabrics perfect for kids who want to look fashionable on their adventures.

Colours included whites, neutrals and light shades to give a cool summertime look. The show was opened by the stunning model and actress, Sarah Jane Dias who sported a long cream patterned blazer from Lulla’s collection.

Other celebrity names included television actress, Sangeeta Ghosh, who was seen walking the ramp with the young models for Sumit Dasgupta’s collection. 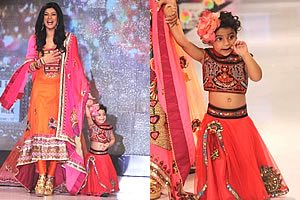 Overall, the event helped the people of India to acknowledge illnesses and disabilities affecting children that are not normally highlighted in the media. Empowering children was a key objective of the event as children are often forgotten.

As well as promoting the event, celebrities did a good deed in donating some of the designer clothes from Kirti Rathore’s collection to the Bandra orphanage.

Although serious issues were addressed in the course of the event, having fun and being in awe of the cute little outfits on show were all part of the celebrations.

Her collection ‘Daughters Dream World’ captured the princess in every little girl as the array of fairytale inspired outfits made a show-stopping presence on the ramp.

A familiar face to the Bollywood industry, child actor Darsheel Safary best known for his role in Taare Zameen Par (2007) also participated in the event. Darsheel said he was very excited to be back on the ramp after a long time despite the pressure of exams and education. 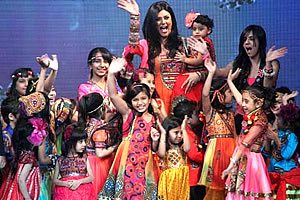 The designers behind the brand ‘Beebay’ added that he was selected as a brand ambassador for the collection because he acted as the perfect role model amongst young children.

Although negative comments circulated after the show’s portrayal of ‘well-dressed’ children, the positive aspect of uniting youngsters to participate and celebrate fashion was evident on stage.

Many youngsters were given the freedom to walk the ramp however they chose, as opposed to the conventional walk we associate the ramp with.

Some of the children joined in on more than modeling, as one young participant was given the opportunity to sing on stage – the event became more than a kid’s fashion show!

Kids fashion has come a long way over the last few years, particularly in the West, with the Kardashians creating a new collection for kids and David Beckham introducing a new kids clothing line for H&M, so there is no reason why Indian designers should be stepping back.

Indian designers have definitely identified the gap in the fashion industry and by launching more of these events and celebrating and acknowledging the youth in India they are on their way to filling this niche market and redefining kid’s fashion in India.

Jinal is studying English with Creative Writing at the University of Birmingham. She enjoys spending time with friends and family. She has a passion for writing and aspires to be an editor in the near future. Her motto is ‘It’s impossible to fail, as long as you never quit.’
Best Dressed at the 59th Filmfare Awards
Highlights of London Fashion Week Autumn/Winter 2014