Best Dressed at the Filmfare Awards 2018

The 63rd Jio Filmfare Awards took place on 20th January 2018. Our favourite Bollywood stars turned up the glamour quotient as they walked the red carpet in their finest designer ensembles. Find out who the best-dressed celebrities were here.

A new year in Bollywood brings with it a celebration of the last 12 months of Indian cinema. The 63rd Jio Filmfare Awards 2018 welcomed the top stars for an evening of comedy, musical entertainment, and high-fashion glamour!

With our favourite Bollywood celebrities upping their fashion game at each and every award show, we take a look at the stunning stars and their outfits that graced the red carpet.

Sparkles, metallics and copious amount of glitter seemed popular themes of the evening. And some of cinema’s leading ladies of years passed proved they still had the power to teach us a few things about style.

DESIblitz presents some of the best dressed looks of the evening and those few stars that sadly fell off the fashion pedestal. 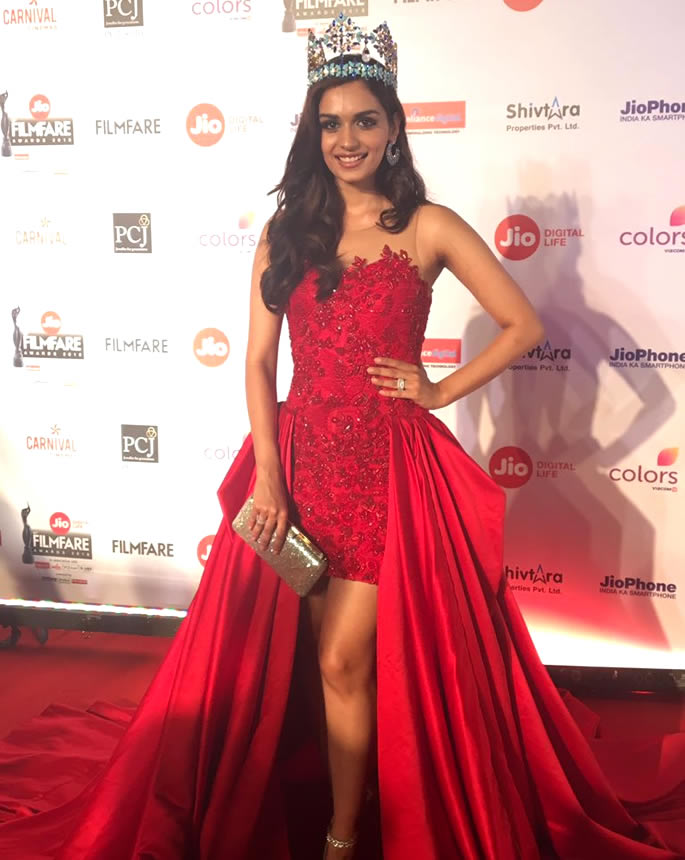 The beauty queen looked beautiful in a red sequined dress by Sonakshi Raaj. While the dress itself stopped above the knee, layers of red satin overflowed down the sides to give a ball gown effect.

Manushi also won the prize for best accessories as she paired her silver clutch and strappy heels with her Miss World crown.

The graceful model notably charmed Shahrukh Khan and Ranveer Singh on stage at the awards as they grooved to some popular dance numbers. 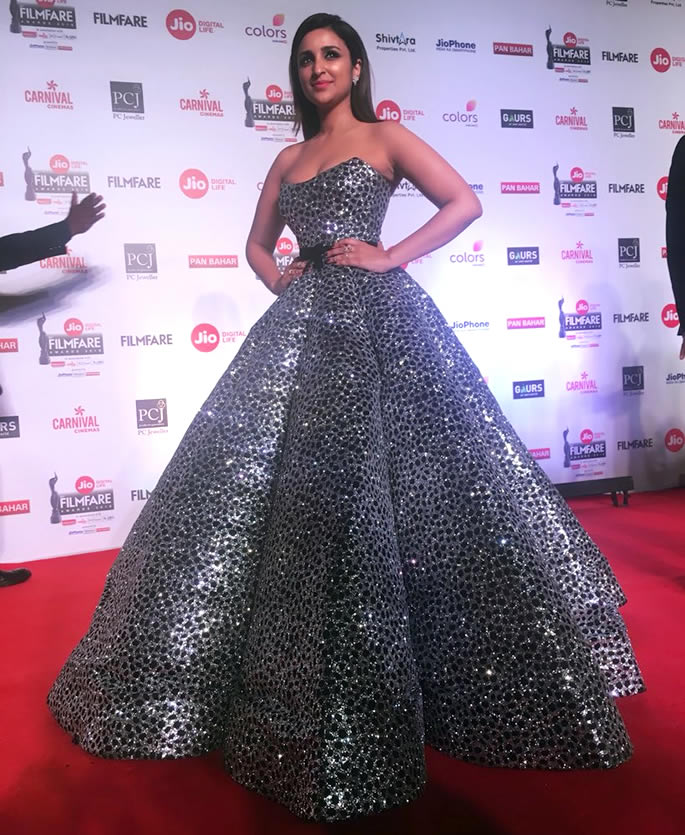 One of our favourite looks of the evening was donned by the bubbly beauty, Parineeti.

The metallic silver and black print by Kujuta and Meri was a dazzling choice. While the actress kept her hair simple and straight, she accessorised with a thin black belt and silver drop earrings.

Parineeti was pure glittery perfection on the red carpet! 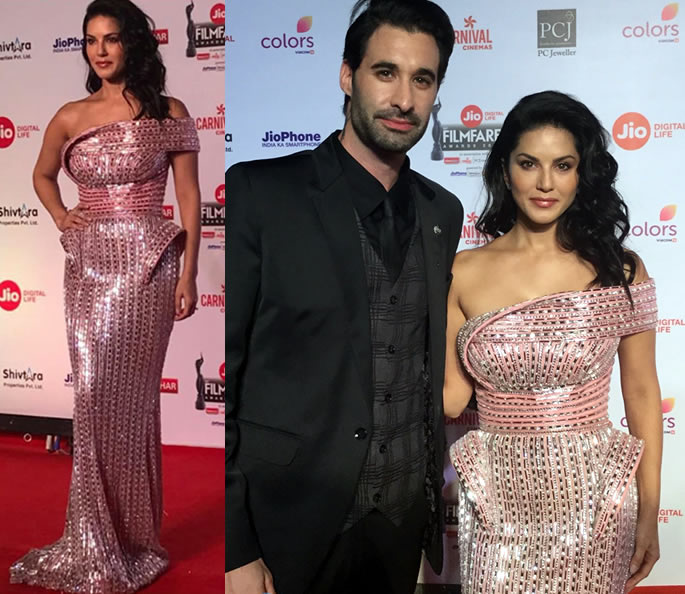 Sunny had a number of outfit changes throughout the night. The actress mesmerised the Filmfare audience as she performed some of her most popular item numbers on stage, including ‘Baby Doll’ and ‘Laila Main Laila’. 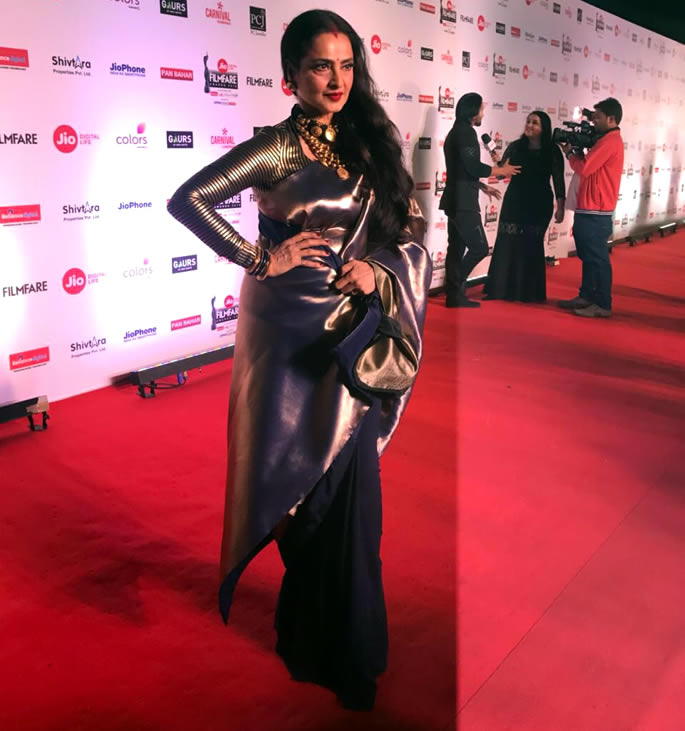 A veteran of Indian cinema, Rekha’s proves time and time again that she is an icon of Indian fashion. While the actress regularly wears traditional sarees when she’s out and about, her style and grace are truly unmatched.

At Filmfare, she opted for her trademark Kanjeevaram saree in hues of royal blue, green and gold. The two-toned saree looked perfect when matched with a contrasting blouse.

Rekha also kept her luscious locks down and paired her outfit with regal gold jewellery. 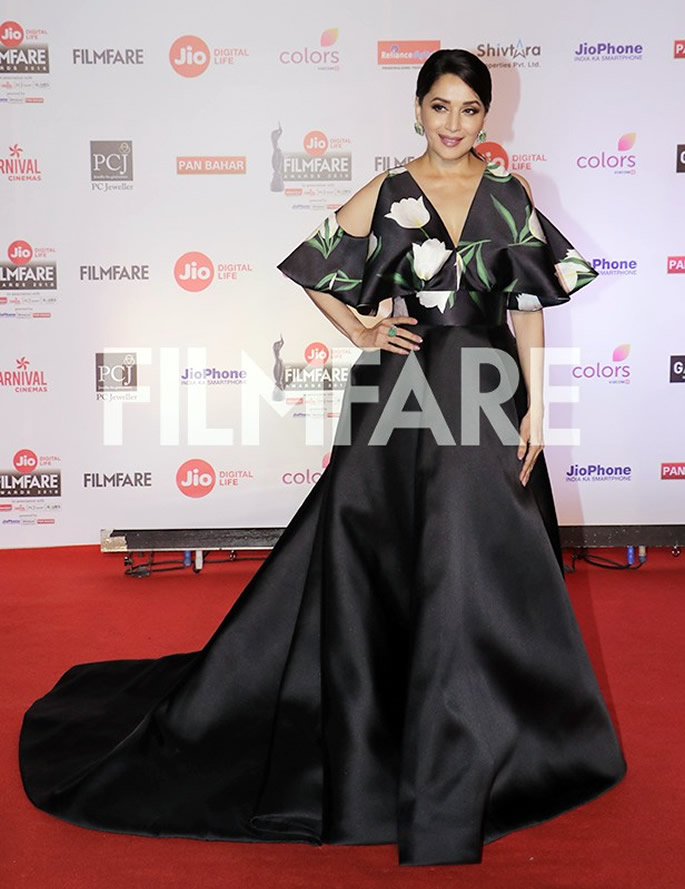 Madhuri took our breath away with this floor-length black gown with floral prints by Mark Bumgarner. The slits in the shoulders and cinched waist accentuated her incredible figure.

The leading lady let her dress do most of the talking, as she kept her hair back in a low ponytail. For accessories, she opted for a few emerald jewels and, of course, her dazzling smile. 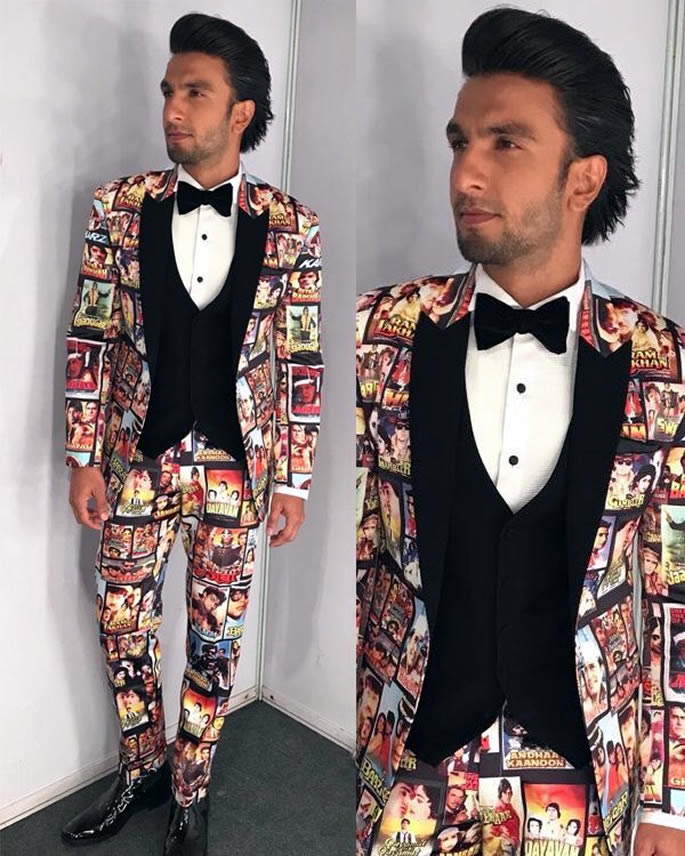 As is true of his every red carpet appearance, Ranveer Singh deserves the crown for most quirky and original outfit.

Showing his love for Hindi cinema, the Bollywood hero wore a custom-made suit that was printed with iconic film posters. 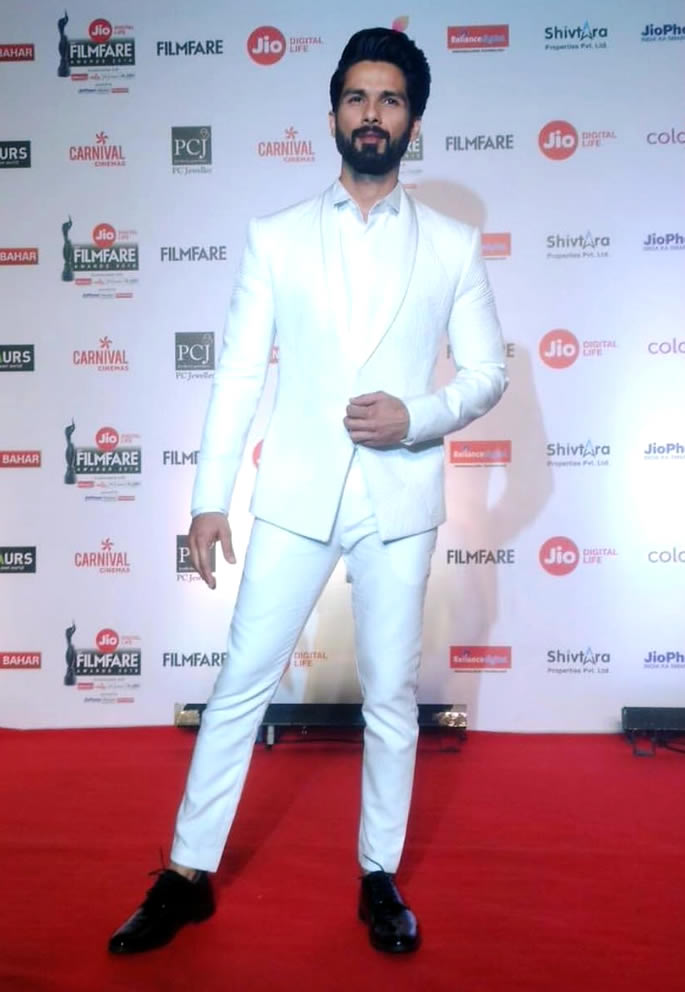 Shahid Kapoor, who is arguably one of Bollywood’s most fashionable men, looked incredibly dapper in an all-white suit.

The textured jacket in the classy hue is incredibly difficult to pull off at the best of times. But Kapoor proves he can, as he paired the look with shiny black dress shoes and an open collar. 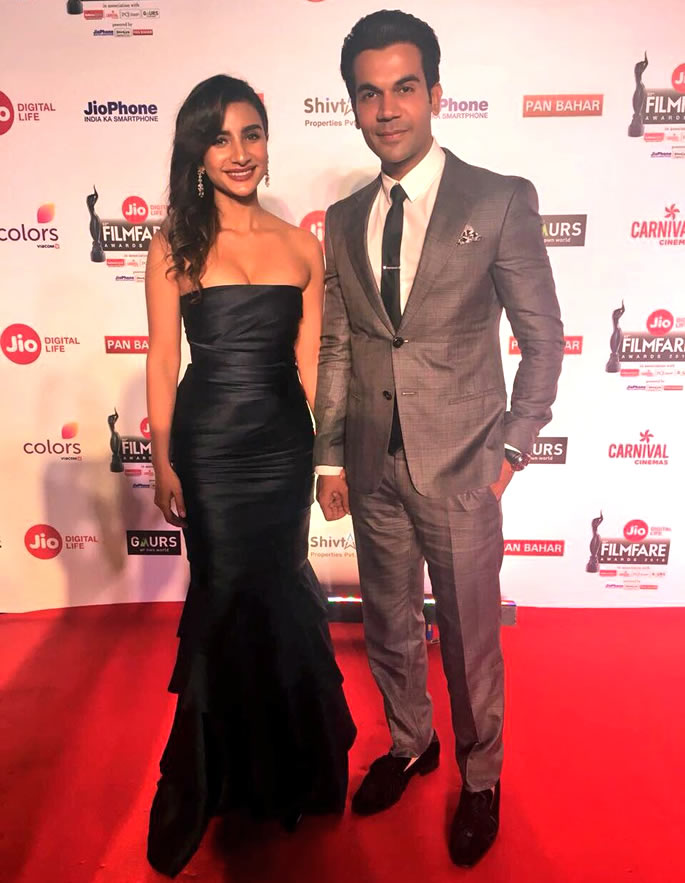 Leading man, Rajkummar Rao took home all the big awards at Filmfare 2018, and he very much looked the part while doing so.

The talented actor opted for a tailored grey suit, black skinny tie with a silver pin and a printed pocket square. Joining him on the red carpet was his equally stunning girlfriend, Patralekha.

With Filmfare being the first big awards ceremony of 2018, the Bollywood crowd sure upped their game. Sadly a few of our favourite stars failed to impress.

Alia Bhatt’s pastel pink/lilac number was a bad choice. The gown drowned out Alia’s stunning figure with its unflattering waterfall layers. While Bhatt usually nails the red carpet look, this year’s dress shape looked awkward and her hair with a princess clip was also uninspired.

On the men’s side, Arjun Kapoor failed to impress us with his alternative to the traditional suit. While we’ll give him credit for opting for a more Eastern look, the military style jacket looked too bulky when compared to his black trousers underneath!

Aside from the glitz and glamour of the red carpet, the evening celebrated the stars and talent behind some of our favourite Indian films of 2017. Take a look at the full winners list here:

Best Cinematography
Sirsha Ray for A Death In The Gunj

Best Costume
Rohit Chaturvedi for A Death In The Gunj