In an exclusive interview with DESIblitz, Vidya Balan talks about her role in the upcoming feel-good Bollywood comedy, Tumhari Sulu.

"What’s wonderful is that she’s not an unhappy homemaker. She’s happy being herself."

National Award Winning actress Vidya Balan has mastered her craft of acting and till date, she continues to express and impress in various shades and avatars.

Besides her superlative acting ability, what sets Vidya apart from the rest is her bespoke dressing sense. The fact that Vidya often wears silk saris at events, she has become the epitome of Desi beauty.

Underlining her talent and ‘hatke’ fashion, is Balan’s bold, humble and sincere persona. This makes the Ishqiya actress supremely amiable.

The graceful Vidya speaks with DESIblitz to discuss her role in the upcoming feel-good film, Tumhari Sulu.

Tumhari Sulu ~ a Celebration of Life and Womanhood 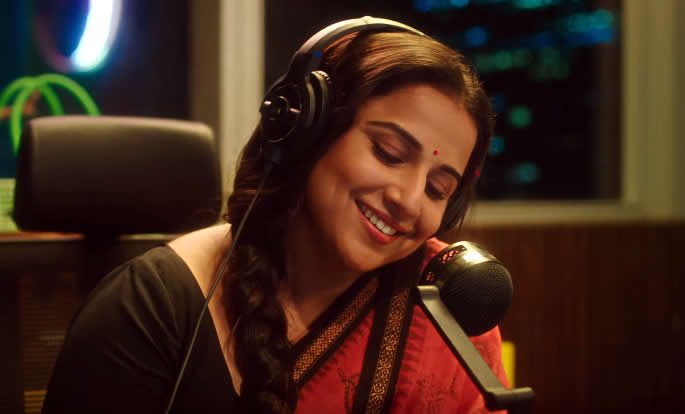 “The true clincher was the script Suresh Triveni (director of Tumhari Sulu) had written and his narration. This brought the film to life for me,” Balan describes what attracted her to the film.

The movie is a refreshing story of an ambitious housewife – Sulochana (played by Vidya) who gets a late-night radio show as the ‘Sari Waali Bhabhi.’

How this job impacts her husband (played by Manav Kaul) and her son forms the crux of the film. Within the trailer, one sees the character cutting vegetables as well as presenting her show.

This visual in itself demonstrates how the housewife maintains and balances both her personal and professional life.

The beauty of Tumhari Sulu is that unlike other housewives which have been depicted in Bollywood, the character is not suppressed. She tells DESIblitz:

“I hope that it inspires women and homemakers to pursue their dreams outside of their homes. What’s wonderful (about the character) is that she’s not an unhappy homemaker. She’s happy being herself.”

From Vidya’s statement, it would not be wrong to say that Tumhari Sulu celebrates womanhood in a very realistic way. Perhaps this avatar could inspire many women in Desi society today.

As the film’s tagline suggests, “Main Kar Sakti Hai” (I can do it) – Sulu is a woman who has a zest for life and wants to experience different things.

If the 30-year-old actress was a radio jockey in real life, she states that her three favourite songs to play would be: ‘Jai Jai Shiv Shankar’, ‘Ban Ja Rani’ and ‘Hawaa Hawaai’ (the two latter songs have been re-used in Tumhari Sulu).

Listen to our full interview with Vidya here:

Alongside Vidya, the film also stars Neha Dhupia (as the radio station manager) and RJ Malishka in supporting roles. Both actresses look promising and hope to deliver their parts with gusto.

Plus, considering that the producers of Tumhari Sulu are Bhushan Kumar and Atul Kasbekar – of Airlift and Neerja, (respectively), the audience expects to see many heartwarming moments. 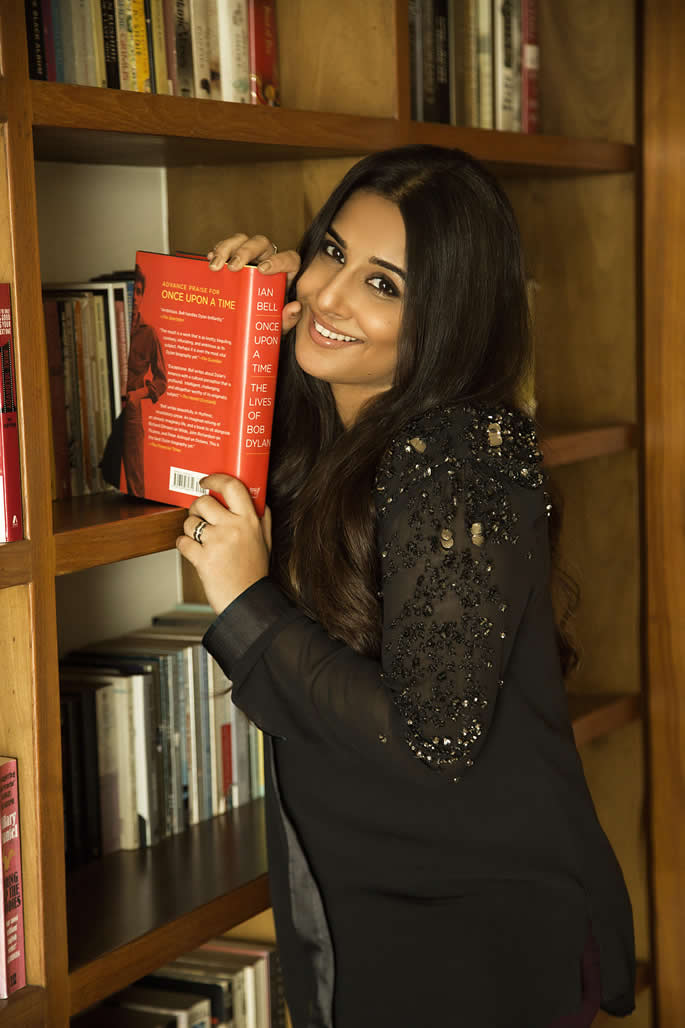 She made her Bollywood breakthrough in 2005 with Vidhu Vinod Chopra’s Parineeta. Since then she has taken the film industry by storm.

Post the commercial success of Lage Raho Munnabhai, she appeared in other moderately successful films like Heyy Babyy and Kismat Konnection.

The general view held by critics was that Vidya seemed like a misfit in typical damsel-in-distress roles. Particularly, journalist Vir Sanghvi established how she did not suit the role of a ‘Bollywood Bimbette’.

In fact, the actress herself described this phase as “a struggle to be someone else.” Soon enough, though, Vidya was set to take the industry by storm.

By essaying head-strong protagonists in films such as Ishqiya, No One Killed Jessica, The Dirty Picture and Kahaani, Balan was credited in the media for pioneering a movement which broke the conventional portrayal of Hindi film heroines.

Given her experience in portraying such intrepid characters, what kind of roles does Balan find most rewarding?

“Roles that I connect to instinctively. Stories about people who never-say-die. I think those are the stories and characters I find most compelling. This is why I feel my character Sulu falls into that category. She’s unbeatable.”

Despite appearing in several commercial and critically successful films, there has been a series of underwhelming movies in her career. These include Bobby Jasoos, Halla Bol, Shaadi Ke Side Effects and Te3n.

However, even with other unprofitable projects like Hamari Adhuri Kahani, Kahaani 2: Durga Rani Singh and Begum Jaan, Vidya Balan proved that she is a performer par excellence. 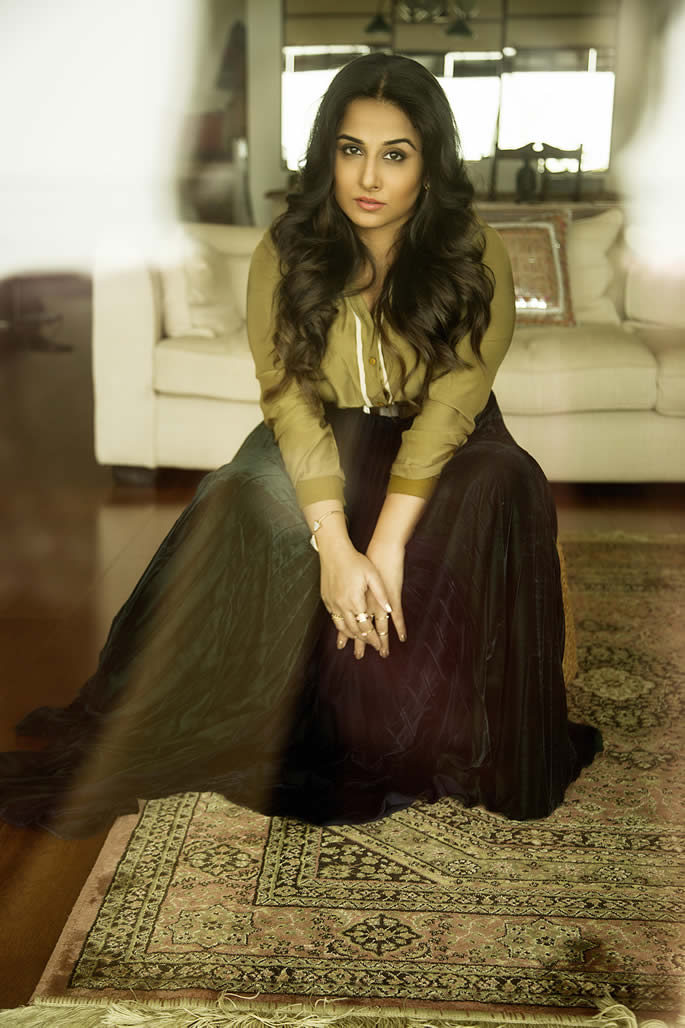 Over the years, the Tumhari Sulu actress has gained several awards from prestigious ceremonies like Filmfare and Screen.

There was a moment of honour when Vidya was bestowed with Padma Shri, the fourth highest civilian award, for her contribution to the arts. She shares her views on receiving such praises and accolades:

“When it’s a heartfelt compliment or when people say things from all their heart, this surprises me. I always say ‘Ooh La La’ [laughs]. It’s humbling and lovely.”

Acting, as we know, is a serious job which certainly does not appeal to the faint-hearted. With long hours of shoot and countless takes, it can be quite a strenuous occupation.

Since Balan has established a successful acting profession and is now also a member of the Central Board of Film Certification (CBFC), would she consider becoming a producer or director anytime soon?

“Not really [laughs]. I don’t think I have the band to be a director or producer. It really requires a lot more work than I put in. I give my all to the one person I’m playing. I couldn’t give to all those people on-set, it’s too much!”

Regarding any future projects, the starlet claims she is currently looking through scripts, so one keenly awaits the announcement of Vidya’s next film.

Throughout her career, Balan has carried style and substance to each and every performance. An uplifting film like Tumhari Sulu is not only fresh, but it seems like a story to which many can resonate with.

Anuj is a journalism graduate. His passion is in Film, Television, dancing, acting and presenting. His ambition is to become a movie critic and host his own talk show. His motto is: "Believe you can and you're halfway there."
SRK replies to Antonio Aakeel to his ‘Chai and Cake’ Tweet
Zaira Wasim is the Rising ‘Secret Superstar’ of Bollywood