Vid-Sid did not reveal the correct venue to the paparazzi

Vidya Balan’s marriage to Siddharth Roy Kapur was held in India’s most populated city on 14th December 2012. The actress defied conventions of having an extremely glamorous wedding, instead having a quiet simple marriage.

The year 2012 has seen plenty of actors from Bollywood getting espoused. In February Riteish Deshmukh married Genelia D’Souza and in October Saif Ali Khan and Kareena Kapoor got hitched. Now end of year, Vidya Balan and Siddharth Roy Kapur are officially husband and wife.

2012 has proven to be a very lucky year for Vidya Balan, first she received the national award for her scintillating performance in ‘The Dirty Picture,’ [2011] and then her movie Kahaani [2012], directed by Sujoy Ghosh went onto become a Blockbuster. And now happily married to the man she wants to spend her life with. 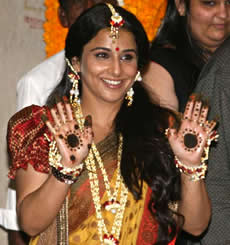 Vidya Balan had a private mehndi/sangeet ceremony at her Khar residence on 12th December. These functions were more of a private affair, primarily including family members and immediate relatives. Rekha was the only artist from the film fraternity to have been invited. Rekha’s wonderful acting in the 80’s and early 90’s inspired Vidya Balan to follow suit.

At the mehndi ceremony, Vidya wore a simple yellow saree with flower ointments to complete the Bengali influenced style. In line with the occasion, Rekha wore a green and pink saree, which complemented Vidya’s choice of clothing. 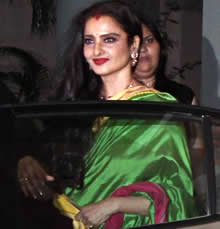 The two young brothers paid a special tribute to Vidya Balan by performing some of her hit filmy songs.

Vidya’s parents Saraswathy and P. R. Balan were present during the various rituals, taking care of all the guests. Her elder sister Priya and brother-in-law Kedar were busy managing all the arrangements. Vidya’s nephew Ruhaan was spotted with his grandparents.

The wedding ceremony was a mix of Punjabi and Tamil traditions. Vidya was dressed like a conventional Tamil bride in a burgundy Kanjeevaram Saree, which was hand crafted by her friend/favourite designer Sabyasachi Mukherjee.

Sabyasachi is a noted fashion designer from Kolkata who has created outfits for many celebrities including Tabu, Aishwarya Rai Bachchan, Kareena Kapoor and Sushmita Sen. He has also designed for international actresses Reese Witherspoon and Rene Zelleweger. 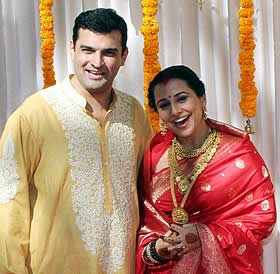 The Times of India reported that in an attempt to mislead the media, Vid-Sid did not reveal the correct venue to the paparazzi. A source close to the newly wedded couple said:

“Nobody, not even close family friends and relatives were told about the venue. They were just instructed to sit in the vehicle that comes to pick them up and proceed to the venue. All the guests arrived at around 7 am.”

The relationship between Vidya and Siddarth was initially kept a secret from the public and media eye. Eventually, the Indian film actress announced in an interview that she has been dating the CEO of UTV.

She said: “I don’t have any plans yet… and there is no engagement ring yet. It’s a while away and I am in no hurry. But it’s on my mind and there is a plan at some point. I will admit that I am dating him but not beyond that.”

It’s been widely reported that Siddharth has been married twice before. Of course this is Vidya Balan’s first wedding.

Following a grand reception held in Chennai, the couple headed for a honeymoon in the Caribbean. One of the most popular honeymoon spots is the Caribbean Islands, attracting many people all year round. In 2009, Indian actress Shilpa Shetty and businessman Raj Kundra [husband] also chose this destination for their honeymoon.

Wishing the married couple Madhur Bhandarkar, director of Fashion [2008] and Heroine [2012] tweeted: “My heart filled wishes to buddy Siddharth Roy Kapoor & Vidya Balan for the new phase of their lives together. Congratulations to the beautiful couple.” 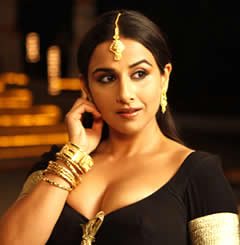 Vidya Balan will be hoping to continue where she left from – post marriage. After the huge success of ‘The Dirty Picture,’ producer Ekta Kapoor referred to Vidya Balan as ‘Vidya Balan Khan,’ putting her in the same league as the top three Khans [Aamir, Shahrukh and Salman].

The actress has known Ekta Kapoor ever since she started her career in 1995, when she played one of the five daughters in Zee TV’s hit comedy serial ‘Hum Paanch.’ Zee Telefilns and Ekta Kapoor’s production house, Balaji Telefilms, jointly created this sitcom.

The stunning actress has been shooting for her upcoming heist comedy film Ghanchakkar. The film produced by Ronnie Screwvala and husband Siddarth is nearing completion. Vidya finished her entire schedule before the wedding took place. Only a week’s schedule remains for the film, before it is released on 21 June 2013.

Once known for making up the numbers in films like Lage Raho Munna Bhai [2006], Vidya Balan is now a force to be reckoned with. 2013 will be a very interesting and critical year for the amazingly sexy Vidya Balan.

Faisal has creative experience in the fusion of media and communication and research which increase awareness of global issues in post-conflict, emerging and democratic societies. His life motto is: "persevere, for success is near..."
Marrakech Film Festival celebrates Bollywood
Dabangg 2 a Smash for Salman Khan