Hindi Medium speaks the Language of the Rich and Poor

It is packed with comedy and rib-tickling moments.

This week, two other promising films have released. These being, Hindi Medium and Half Girlfriend. Interestingly, both films highlight education and blending into modern Indian society.

From the title, it seemed like Hindi Medium would follow the lines of Gauri Shinde’s English Vinglish. However, this certainly is not the case!

The family move to an English speaking society in Vasant Vihar – hoping that this lifestyle will work in the favour of Pia getting into a good grammar school.

After Pia’s admissions are rejected, Raj and Mita decide to leave their rich life and act as being poor so that they can claim free education under ‘The Right of Children to Free and Compulsory Education Act (RTE) 2009.’

With such an intriguing concept, this Saket Chaudhary film promises to be a thought-provoking laugh riot. Here is our review!

The film is, in turn, a remake of the 2014 Bengali hit – Ramdhanu. Nonetheless, Saket Chaudhary and Zeenat Lakhani’s script is well-written. The movie smartly tackles various issues – including language barriers, corruption and education, as well as distinguishing the difference between rich vs poor.

In fact, this fusion of comedy with satire is on par with other successful films like Munnabhai MBBS and Jolly LLB. 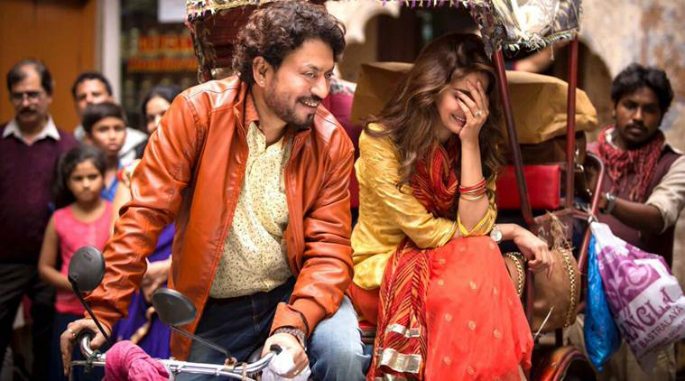 Whilst the audience sympathises with the underprivileged characters, the movie does not preach and simply entertains through the hilarious one-liners.

For instance, when a teacher comes to inspect Raj and Mita’s house – Suryaprakash (Deepak Dobriyal) a poor factory worker says that “living in poverty is an art.”

This reinforces that those who are destitute find ways of living happily. On many occasions, the dialogues are also compulsive.

This exhibits that although the Desi society has progressed so much, their thought process is still primitive.

As a director, Saket Chaudhary does a decent job. This movie is far better than his last lukewarm comedy – Shaadi Ke Side Effects.

Here, Chaudhary compels the audience to chuckle, as well as exposing the current plight of India’s education system.

Despite a noble endeavour, there are a few flaws. The transition of the Batra family moving from a low-society accommodation to a lavish mansion was quite far-fetched and rushed.

Whilst Irrfan Khan’s character is shown to be the ‘business tycoon’ of Chandni Chowk – the move to Vasant Vihar is quite drastic and needs more development.

The first-half is a complete delight. It is packed with comedy and rib-tickling moments. The second-half, on the other hand, drags slightly – especially with the sequences of Qamar and Khan living as poor people. But despite this, the film does not fail to entertain the audience. 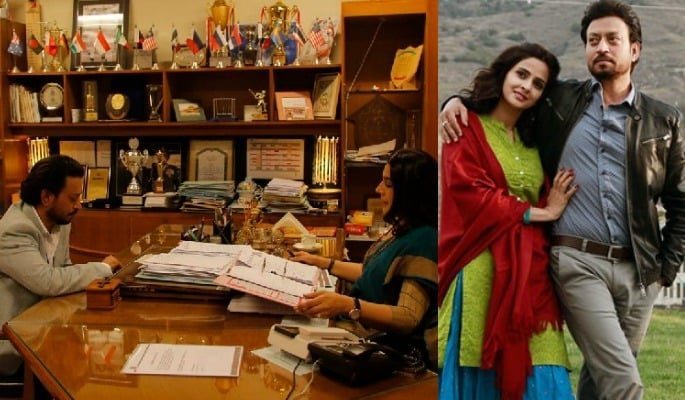 The biggest driving force of Hindi Medium is the performances.

Irrfan Khan steals the show yet again. The most remarkable point about Khan is that his comic timing is so effortless and dialogue delivery is spoken with such ease.

Even when it comes to the serious and emotional scenes, Irrfan Khan never fails to shine. Look out for him in the climax scene and you will be reminded of what a phenomenal actor he is!

Pakistani actress Saba Qamar makes her Bollywood debut with this social comedy film and does a very good job. Her chemistry with Khan is natural and the way she asks him “do you know the spelling?” of English words throughout the film is endearing. She essays the role of a worried and determined mother well.

Even when it comes to the emotional scenes, Saba Qamar acts with ease too.

Deepak Dobriyal has proven his craft previously in films like Tanu Weds Manu and Prem Ratan Dhan Payo. He strongly persuades the audience that people who are suffering through destitution and hardship can also be big-hearted. Another good performance to add to his kitty.

Amrita Singh plays the business-minded principal. From previous works like Kalyug, we know that Singh can execute a negative role with ease. She does a fine job – although one wishes to have seen more of her.

Sanjay Suri and Neha Dhupia appear in cameos as high-society parents. They fit the bill.

Overall, Hindi Medium is a well-intentioned film. With a fresh concept for Bollywood and a narrative applicable to today’s society, the movie will certainly work with the masses. In fact, Hindi cinema requires movies like this. Don’t miss out on it!