Despite the protests, PK has shattered all existing box office records and is the highest-grossing Hindi film of all time! The Top 3 highest-grossers all star Aamir Khan, whose films were the first to break the 100, 200, and 300 crore milestones.

I had never in my wildest dreams thought this film will cross these numbers.

Bollywood’s most controversial film of 2014, PK, has shattered all box office records.

PK was the fastest film to make it to the ‘300 crore club’ at the domestic box office.

The film has turned out to be a great money generator with a substantial chunk of the revenue, Rs. 150 crore ($24 million; £16 million), made in the overseas market.

Aamir Khan has beat his own record with PK, and overtaken the collection of Dhoom 3, which made a humungous Rs. 542 crore ($90 million, £59 million) worldwide. 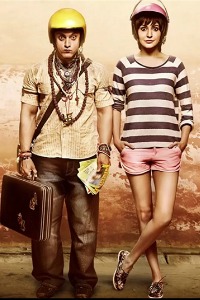 Remarkably, apart from PK, the top Bollywood grossers are Dhoom 3 and 3 Idiots. All three of these films in the top 3 slots star Aamir Khan, thus making the Bollywood star indisputably the ‘star of the overseas’ too.

Interestingly, the top three films to have first scored the 100, 200 and 300 crore milestone are all Khan-starrers. 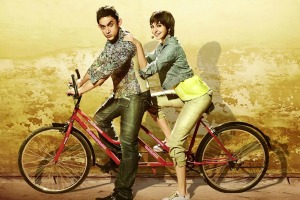 The success of the sarcastic drama film has not been interrupted by local commotion and protests, and PK is estimated to complete the third week successfully as well.

The film is expected to continue to do well, even in its fourth week. However, the recent release of Tevar starring Arjun Kapoor and Sonakshi Sinha, could result in a fall in box office sales.

Director of PK, Rajkumar Hirani, said of the film’s success: “I had never in my wildest dreams thought this film will cross these numbers. It reinforces faith that content is king.”

He added: “We can continue making films we believe in. The messages I get are overwhelming. People are watching the film over and over again. It’s humbling.” Trade analyst Komal Nahta celebrated the film’s success, tweeting:

Nahta added: “The 276 crore of #PK is like a slap on faces of frustrated lot. Just like tax-free to PK in U.P. is on face of religious gurus who cried foul.”

Aamir Khan and Rajkumar Hirani voiced their worries about the protests. Aamir defended the film stating that it respects all religions.

But the masses have voted with their feet and with their wallets. Not affected by the howls of protest, the Indian people and Bollywood fans overseas have made PK the highest grossing Bollywood film ever!

Komal is a cinéaste, who believes she was born to love films. Apart from working as assistant Director in Bollywood, she finds herself doing photography or watching Simpsons. “All I have in life is my imagination and I love it that way!”
Ranbir engaged to Katrina?
Winners of the 2015 Star Guild Awards