The 2015 PTC Punjabi Film Awards was a glamorous affair, welcoming the superstars of Punjab to celebrate the best of Punjabi cinema and entertainment. Find out who won what here.

The two big films which stood out at the awards for 2015 were Punjab 1984, and Jatt James Bond.

Celebrating the continuing success of Punjabi cinema, stars and celebrities gathered to witness the best of ‘Pollywood’ for 2015.

Hosting the show were Sonu Sood, Diljit Dosanjh and Binnu Dhillon, showcasing the crossover of Punjabi cinema with Bollywood.

The trio continued their legacy of comedic value, entertaining the star-studded audience with their jokes and humorous skits. 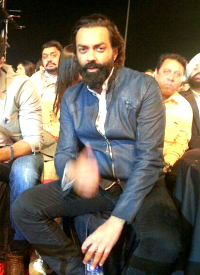 With the continual surge of Punjabi films filling up our cinema screens, 2015 marked an incredible mix of hard-hitting historical epics, romance, action and comedy.

Disco Singh was another big winner, with Surveen Chawla taking the trophy for ‘Best Actress’. The ‘Best Actor’ award was split between Diljit Dosanjh and Gippy Grewal for their respective films, Punjab 1984 and Jatt James Bond.

All of the nominees truly reflect the diversity of the Punjabi film industry, as they are beginning to experiment many more different genres with great success.

Here are the winners of the PTC Punjabi Film Awards 2015:

Best Performance in a Negative Role
Pavan Malhotra For “Punjab 1984”

Film with a Social Message
Baaz

For the first time, the PTC Punjabi Film Awards will be broadcast across the world including India, UK, USA, Canada, Australia and New Zealand on March 27, 2015.

This is your chance to see the full live show and the performances from the night. You can watch the ‘Curtain Raiser’ for the 2015 PTC Punjabi Film Awards here:

Congratulations to all of the winners of the PTC Punjabi Film Awards 2015!

Nazhat is an ambitious 'Desi' woman with interests in news and lifestyle. As a writer with a determined journalistic flair, she firmly believes in the motto "an investment in knowledge pays the best interest," by Benjamin Franklin.
2015 IIFA Awards return to Malaysia
Fun, Love and Laughs in Dilliwaali Zaalim Girlfriend