Bollywood is ready to take Malaysia by storm as Kuala Lumpur is the official venue for IIFA 2015. DESIblitz has more from one of B-town’s coveted awards.

"Malaysia won it because the country connects strongly to India and Bollywood.”

After enchanting Hollywood with the thumkas of Bollywood at Tampa Bay in 2014, the IIFA Awards 2015 is ready to pay Malaysia a second visit.

Kuala Lumpur is the destination for the award function for 2015, however this is not the first time Malaysia has won the bid!

It has previously hosted IIFA 2002 at Genting Highlands… and that with such chic finesse! Other contenders on the list of cities to host this prestigious Bollywood Award ceremony included Bangkok and Madrid.

But eventually, it was Kuala Lumpur that bagged the bid as it effortlessly connects to India and Bollywood, in addition to being a destination where business meets leisure!

Though Bangkok and Madrid lost the bid, Andre Timmins, an IIFA spokesperson, is keen to host star-studded event in those cities in the future. 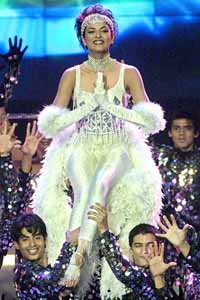 He said: “We were in talks with Bangkok and Madrid. We are going to continue our dialogue with Spain for hosting future editions.

“Malaysia won it because the country connects strongly to India and Bollywood and also in terms of business and tourism.”

The colourful and vibrant city of Kuala Lumpur is among Bollywood’s favourite shooting destinations and is now set to welcome the stars of Bollywood once again.

This year, IIFA will begin in the first week of June 2015 and will span across three days. Be ready for an extravagant display of pure masala magic, filled to the brim with fashion, music and films.

This is the 16th edition of the International Indian Film Academy Awards and IIFA 2015 is prepared to take on more than what it normally does.

IIFA 2015 will feature a host of activities. Some of them include film and music workshops, fashion shows, fan’s meet and greet, technical awards and media briefing for forthcoming films.

The United States hosted IIFA 2014 at Tampa Bay, Florida. The event was a grand success with Hollywood celebs joining in the merry making.

Kevin Spacey and John Travolta were among the popular faces who participated. The whole affair proved to be something the audience loved! 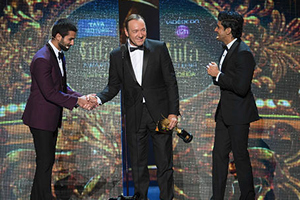 John Travolta not only shook a leg with Priyanka Chopra to ‘Tune Maari Entriyaan’ from Gunday, but also gave her a couple of pecks.

This year, the IIFA has similar plans for other popular names. Timmins said:

“What we did with Kevin Spacey and John Travolta we are going to do that this year with south stars. They are extremely popular. We will make them do things that they have not done in the past.

“Kamal Haasan has come to IIFA very often. We will try to get Rajinikanth, Vijay, Kamal, it all depends on who is available at that time.”

Organisers of the awards festival, Wizcrafts, is between engagements and talks with the Ministry of Tourism to smoothly facilitate the event.

They are deliberating and making efforts to include local stars and celebrities in the event as well. IIFA as an organisation has come a long way since its inception in 2000.

However, in keeping with the times and modern outlook of the brand, it is set to reinvent itself in 2017 for the coming 15 years. On that note, there are only about two months left before Southeast Asia grooves to the tunes of Bollywood!