On Republic Day, the Stardust Awards 2013 were held at the MMRDA grounds in Bandra, Mumbai with all the glitz, glamour and of course, the red carpet.

Amitabh stole the show when he danced to the famous song 'Jumma Chumma De De.'

The Max Stardust Awards 2013 were held on Saturday 26th January at the Bandra Kurla Complex in Mumbai, India. At the glittering awards ceremony, top honours went to Sri Devi and Priyanka Chopra who jointly won the best actress [drama] award for the films English Vinglish [2012] and Barfi! [2012].

At the 11th Stardust Awards, Priyanka Chopra was delighted on winning two awards. Expressing her happiness she said:

“It feels great to hold both the trophies. I worked really hard for ‘Barfi’ and it was a challenging film for me. So it feels great when it is acknowledged.”

Bollywood Megastar Amitabh Bachchan thanked Stardust for respecting him with the ‘Star of the Century Award.’

“I would like to thank stardust for awarding me today. It has been 44 years in the industry and I am really grateful to the Indian audience for keeping me alive in the industry from so many years,” said Big B. 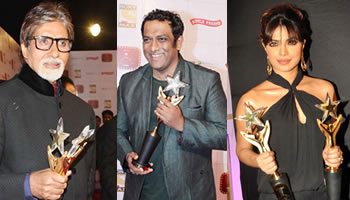 The ‘Badshah of Bollywood,’ Shahrukh Khan received his first two awards of the year for the film ‘Jab Tak Hai Jaan.’ Shahrukh did not attend the event, as he was meeting some of his fans at a show in Birmingham, England.

Each year ‘Magna Publishing’ along with media partner SET Max organise this event, in which top celebrities from the world of Bollywood come together on one platform. These are the fourth Bollywood based awards to be held this year.

The awards ceremony, which established in 2003 has now become a well-recognised event. In 2013, Stardust Awards were presented to film artists for achieving excellence in their respective fields.

Award ceremonies are often like a PR exercise, as celebrities are much more relaxed when they mingle with one another and the media. The 2013 Stardust Awards were very much like a public affair. 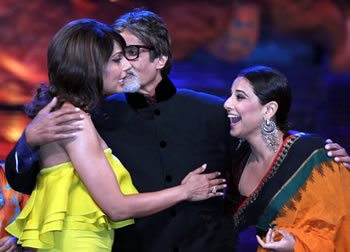 Outfits worn by the stars varied from dashing Gucci jackets to fashionable gowns. Gowns have become very popular at red carpets, because many of the ladies acting in Bollywood today happen to look very fit and fabulous.

At the start of the awards show a minutes silence was observed for Bollywood legends Yash Chopra and Rajesh Khanna who sadly passed away last year. Hosted by Ayushmann Khurrana, the awards ceremony included sizzling performances from Kareena Kapoor and Sonakshi Sinha.

Amitabh stole the show when he danced to the famous song ‘Jumma Chumma De De.’ Not only did he perform to the song, but he also kissed the beautiful ladies who joined him on stage. Amitabh rounded up his perfect night on twitter saying:

“They asked me to dance to ‘Jumma Chumma’ (from the film ‘Hum’). I asked during ‘Jumma…’ who do I have to kiss? And all the lovely ladies in the front row ran up the stage – guess who?”

“Vidya, Priyanka, Parineeti (Chopra), Anushka(Sharma), Bipasha (Basu)…and I gave them all a peck. It’s been a generous day,” he further tweeted.

Winners of Max Stardust Awards 2013 are:

FILM OF THE YEAR
Barfi

STAR OF THE CENTURY
Amitabh Bachchan

PRIDE OF THE INDUSTRY
Vijayanthimala Bali

Its quite evident from the winners list that a number of people who had contributed to the Bollywood film industry in 2012 have been given an award. Unlike other award events, Stardust has focused more on upcoming artists, with less focus on the technical elements of the industry. DESIblitz would like to extend a big congratulations to all the winners.

Faisal has creative experience in the fusion of media and communication and research which increase awareness of global issues in post-conflict, emerging and democratic societies. His life motto is: "persevere, for success is near..."
58th Filmfare Awards 2013 Winners
Saif sets the Pace with Race 2