The Sansui Colors Stardust Awards 2014 saw a spectacular evening of Bollywood royalty all in one room. Marking the beginning of the awards season, the Stardust awards was the place to be. DESIblitz has all of the winners.

Kangana Ranaut took the ‘Best Actress’ award for her brilliant performance in Queen.

It’s that time of year again! 2014 is ending and the award season is approaching.

After the magnificent work produced in 2014 from Bollywood, it’s time to award and credit all the hard work that was put in. From the people in front of the camera to the people behind it.

For 2014, the Stardust Awards teamed up with Colors and Sansui after discontinuing their partnership with Sony Max. Their 25 categories celebrate the best and most promising of the film community.

The annual Searchlight Stardust Awards began in 2003 and are the only award function that focuses on applauding and commending the new upcoming talent of Bollywood. 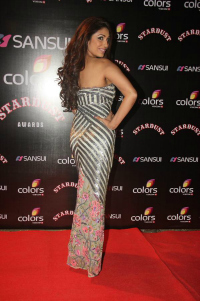 Both known to be great presenters, and with Ritesh’s impeccable comic timing, both personalities brought an interesting twist to the event.

Along with a glamorous red carpet, no Indian awards ceremony would be complete without some thamakada performances from Bollywood’s elite.

Performing on the night were the likes of Parineeti Chopra, and Madhuri Dixit who danced to popular Disco Hits. Arjun Kapoor and Kareena Kapoor also took to the stage, but all eyes were on Shahrukh Khan’s grand entrance, which as expected led to a spectacular performance.

Shahrukh celebrated the success of Happy New Year, which won ‘Film of the Year’, while Farah Khan took the ‘Dream Director’ award. King Khan himself reigned supreme with ‘Best Actor – Thriller/Action’ and the ‘Star of the Year’ award.

The ‘Star Of The Year’ certainly grabbed a lot of attention, especially as the nominations included both Shahrukh Khan for Happy New Year and Salman Khan for Kick. If the two stars weren’t in conflict already, the award was definitely a surprise for both SRK and Sallu fans.

With so  many female oriented films seeing commercial and critical success in 2014, all eyes were on the ‘Female’ categories, and the women of Bollywood certainly didn’t disappoint.

Kangana Ranaut took the ‘Searchlight Best Actress’ award for her brilliant performance in Queen which not only got her critical but commercial success, but also entered the 100 crore club. 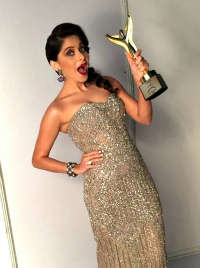 Queen deservedly won the ‘Searchlight Best Film’ award as well as the ‘Best Director’ award for Vikas Bahl who shared it with Imtiaz Ali (Highway).

Priyanka Chopra took the ‘Best Actress – Drama’ award for her action packed performance in Mary Kom, one of her most gruelling roles to date, as she  had to get into the skin of the character by changing her physique.

Musical talent Kanika Kapoor also stole the show with ‘Best Playback Singer – Female’. In an exclusive Gupshup with DESIblitz, Kanika told us: “I am absolutely thrilled. Everybody has been working very hard. It’s like a dream come true.”

The singer who has made a big entry into the Bollywood industry was nominated for her smash hit ‘Baby Doll’ and new dance anthem ‘Lovely’. Both songs which stormed the music charts gave her a slight upper hand over her opponents.

Speaking about her immense success with her songs, she added: “It’s not just my achievement. Everyone has been putting a lot of effort and work into this. Like my parents and friends, so it’s down to everybody’s effort.”

Here is the list of winners of the Sansui Colors Stardust Awards 2014:

Jodi of the Year
Ranveer Singh and Arjun Kapoor (Gunday)

Special awards were also given to Asha Parekh who received the ‘Lifetime Achievement’ award and Anupam Kher who won the ‘Pride of Film Industry’ award.

With so many awards, in so many categories showcasing the ever-expanding genre of Indian cinema, the Stardust Awards 2014 celebrated the achievements and talents of all.

A thoroughly entertaining night of Bollywood glitz and glamour, you can catch the full awards show on Colors TV in January 2015. Congratulations to all of the winners!

British born Ria, is a Bollywood enthusiast who loves to read books. Studying film and television, she hopes to one-day produce good enough content for Hindi cinema. Her motto is: “If you can dream it, you can do it,” Walt Disney.
Dilwale Dulhania Le Jayenge enjoys 1000 weeks
EE ends Orange Wednesdays cinema deal