Colors TV is offering a fantastic opportunity for UK viewers to perform live on stage at the IIFA Awards 2016, alongside The Shiamak Davar Dance Company.

"It's a fantastic chance for Bollywood fans to meet and share the same stage as their idols!"

Colors UK is offering an once-in-a-lifetime opportunity to be a part of The Shiamak Davar Dance Company at IIFA (International Indian Film Academy) 2016 in Madrid.

Taking place between June 23 and 26, 2016, this is an incredible chance for dancing aficionados to take to Bollywood’s biggest and most recognised stage and dance in front of all their favourite Bollywood celebrities.

Winners of the competition will be able to strut their best Bollywood dance moves alongside the prestigious Shiamak Davar Dance Company, with performances choreographed and designed exclusively by Dance Guru, Shiamakh Davar for the IIFA weekend.

The contest will be judged by ace choreographer Shiamak Davar, Raj Nayak (CEO of Colors) and Viraf Sarkari (Director of Wizcraft). Commenting on this opportunity, Viraf said:

“The 17th IIFA Awards in Madrid, Spain will be a great platform for the two lucky winners to have the opportunity to be a part of one of the most highlighted events in Indian cinema alongside a gamut of Bollywood celebrities.

“The Competition was conducted last year [2015] and was a huge success and this year certainly will be better than ever!”

One male and one female will be selected as winners, and they will receive the opportunity to train at the SHIAMAK IIFA Workshops, which will be held in London from the end of May 2016. 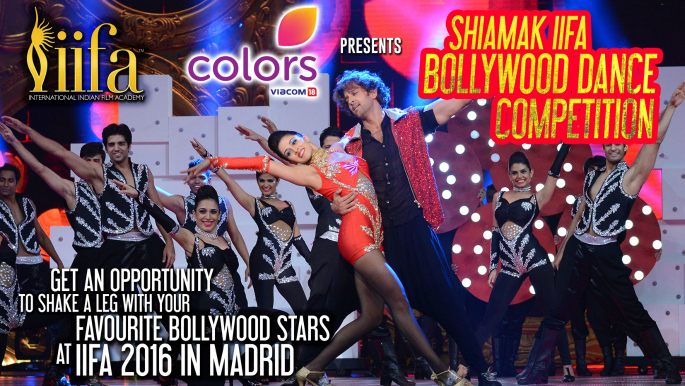 Shiamak mentions: “I have been associated with IIFA since 2002. It’s a fantastic platform to take Bollywood to new international destinations each year.

“Bollywood has such a huge fan base globally. I am happy to give an opportunity to local talent to perform to their favourite stars and to be a part of the whole IIFA experience on stage and backstage.”

“The Shiamak IIFA Dance Competition on COLORS UK is a fantastic chance for Bollywood fans from the UK to meet and share the same stage as their idols!”

IIFA’s main aim is to establish a system of mutual benefit to both India as well as the host destinations by boosting tourism, economic development, trade, culture, cross-border investments and film co-productions.

Business Head of USA and UK at Indiacast, Govind Shahi, said: “Indian cinema over the years has become a global phenomenon, and IIFA is at its helm. We have been committed towards creating holistic experiences for global audiences and through the COLORS presents SHIAMAK IIFA Dance Competition, we hope to achieve just that.”

Shiamakh hopes that alongside the chance to meet and greet Bollywood stars, his international dance company can encourage more local talent to pursue their dreams as professional dancers.

The SHIAMAK group itself follows the mantra, “Have Feet Will Dance,” and this dance movement is one of the largest in the world. Shiamak has reached out to over a million dance enthusiasts across India, Canada, Australia, UK, USA and UAE, through his dance academy.

Shiamak Davar has, in his illustrious dance career, revolutionised choreography in Bollywood. He received the esteemed National Award for choreography for the film Dil Toh Pagal Hai (1997). Plus, with Mission Impossible: Ghost Protocol (2011), Shiamak’s choreography has also reached international levels.

His not-for-profit organisation, Victory Arts Foundation (VICTORY) empowers individuals who are lesser privileged, vulnerable to HIV/AIDS or with special needs.

Having been associated with IIFA since 2002, each year Shiamakh’s performances have wowed and enthralled audiences.

In 2015, in Malaysia, he thoroughly impressed the audience with several spell-binding performances by Shahid Kapoor, Shraddha Kapoor, Ranveer Singh and Arjun Kapoor.

It is expected that Shiamak’s performances at IIFA 2016 will be just as glamorous in Madrid.

Participants interested in the Shiamak IIFA Dance Competition can read detailed terms and conditions, register and upload their videos to the Colors TV website, here. The contest closes on May 31, 2016 at 11:59PM GMT.

Anuj is a journalism graduate. His passion is in Film, Television, dancing, acting and presenting. His ambition is to become a movie critic and host his own talk show. His motto is: "Believe you can and you're halfway there."
British Girl Tanya Wells adores Classical Indian Music
Desi Grooves Party celebrates a Great IDFB 2016