Baby Aaradhya Bachchan is the shining star of the parivaar. Aishwarya Rai Bachchan counts motherhood as a blessing and is enjoying every moment.

"The joy, the bliss, is wonderful. A smile from my daughter and that’s it!”

Mujhko Pehchaanlo Main Hoon Kaun – Main Hoon ‘Supermom’ [Who Know I am – I am Supermom]. Well, it can be none other than the commendable Aishwarya Rai Bachchan [Ash]. Talk about hands on, we haven’t seen this blue/green-eyed beauty in films for a few years. That’s only because Ash has been busy with her bundle of joy – her baby girl Aaradhya Bachchan.

Ash was supposed to do Madhur Bhandarkar’s film Heroine [2012], but had to drop out, as she was pregnant at the time. Kareena Kapoor Khan later accepted this role, with the track ‘Halkat Jawani’ going on to become the most successful item song of 2012.

Then it was rumoured that Sanjay Leela Bhansali was directing a film with Shahrukh Khan and Ash as the main leads, but nothing has been officially announced as of yet. In addition to this she was supposed to act with John Abraham, Ameesha Patel and Paresh Rawal in a film called Happy Birthday, however, this movie has apparently been shelved. 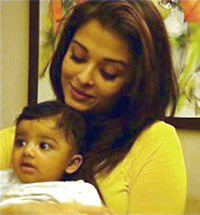 Aishwarya likes to be around her daughter because she feels that the first few years of a child’s life are so important. It’s hard being a mother, especially when you are part of a well-known Bollywood family like the Bachchans. The family is like box office news and is always in the limelight. The former Miss World is enjoying motherhood and it seems like nothing fazes her. Talking of this Aishwarya said:

“It’s splendid… It’s inexplicable. The joy, the bliss, is wonderful. A smile from my daughter and that’s it! She’s good. She’s great.”

Hubby and actor Abhishek Bachchan admires his wife and loves to spend hours with his daughter when he’s not filming. Abhishek states: “I love playing with my daughter and I’m totally amazed with the way she runs already.”

When it was announced that Aishwarya was pregnant, everybody was wondering whether she was expecting a baby girl or baby boy. Finally on 16th November 2011, the media reported Ashwairya Rai had given birth to a baby girl. Like daughter, Ash was also born in the month of November. 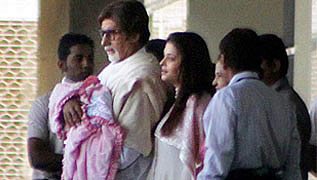 The Bachchan family has always been very protective of their children, and thus no one got a glimpse of the baby during the first few months following her birth. Keeping it very private, the media too were kept at bay, as the family didn’t want the newly born to gain this kind of exposure at such an early age.

Aishwarya gave her reasons for initially covering Aaradhya’s face in public and said: “I think it is the job of media to take pictures or bytes. But as a mother, as a family, we were just trying to be protective. She is too small and new to this world. I did not want her to get hassled. It was just a natural instinct of being protective.”

At around this time, Photoshop artists were circulating fake photographs of the baby on the Internet. Pictures were all over Facebook, Twitter, Indian Magazines and TV shows, featuring as the main headline on news channels. 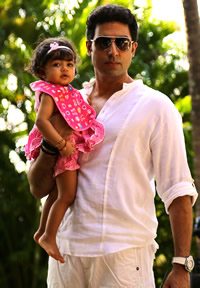 A few hours after this news had spread worldwide, Abhishek tweeted: “To be my daughter in her mother’s arms. Full points for creativity to the people who made them. Spent the morning with the girls and showing them some rather entertaining photos morphed by some very talented people.”

It was only on the sets of Dhoom 3, whilst Abhishek was filming, that a photo was taken for the first time of Ash carrying her baby.

During February 2013 people in Bhopal couldn’t believe their luck as Amitabh, Aishwarya, Abhishek and Aaradhya Bachchan paid a visit to the City of Lakes to meet Jaya Bachchan’s family. Aishwarya and daughter Aaradhya were spotted in Bhopal wearing pink outfits.

On her first birthday it was reported that ‘Beti B’ was gifted a black and red BMW Mini Cooper from her parents. However, grandfather Amitabh came out on Twitter later to quash the media rumours. Another media speculation that Aradhya had been bought a lavish holiday home in Dubai for Rs 54 crores was also firmly denied by Abhishek Bachchan.

Aaradhya’s birthday party was a quiet family affair, with Abhishek only tweeting a photo of himself, Aishwarya and their cute little doll. Big B also took to twitter and said: “Aaradhya’s 1st birthday!! Just family and the silence peace and quiet after many hectic evenings… Your blessings and love!” 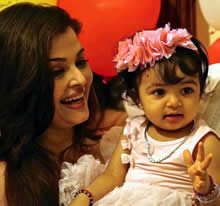 Can you believe it? Aaradhya is one already, it felt like only yesterday when the couple tied the knot…Wow time flies!

Looks like Aishwarya’s little one has been gifted with beauty and brains. Grandfather Amitabh Bachchan wrote on his blog: “Aaradhya turns on the iPad to her favourite nursery rhythms programme all by herself… picks up remotes whenever she can see one and points it to the TV in a pretense to put it on.”

“What a fantastic generation of our world and what a pity we shall never be there to see it evolve into a world that shall be governed and controlled by little kids and their deep accumen at the cyber,” added the 70-year-old Bollywood Legend.

Looking ahead to the future, Father Abhisek says daughter Aaradhya will decide her career for herself and as parents it is their responsibility to give “love, care and good education” to the child.

Whatever career path she chooses, Aaradhya is being nurtured to make her parents proud and to achieve big things in life.

Anisha has lived and breathed Bollywood since she was young! She loves everything Desi and would like to become an actress in the future. Her life motto is " Zindagi nahin milti hai baar baar, toh khul ke jio aur haso - umar beeth jaati hai..."
Winners of 2013 Star Guild Awards
Steven Spielberg Mingles with Bollywood