Aishwarya and Abhishek Bachchan are proud parents as they watch Aaradhya perform at her school’s show. A viral video has captured the cute moment.

One can easily spot Aishwarya's daughter as she confidently performs the adorable routine.

Every parent feels proud when they see their little one in a school play. This is certainly how Aishwarya and Abhishek felt when they watched Aaradhya perform at hers.

As the school is the top location for famous actors to enrol their children, many from the Bollywood scene attended. However, Aaradhya’s appearance has stolen the spotlight after a video surfaced of her.

The particular scene sees Aaradhya lead other girls in a big dancing number. The young girls are in front, wearing white-and-red dresses with their hair styled into cute pigtails. In the next row are two groups of boys in blue.

Finally, at the back are older children who sing Sharika’s ‘Try Everything’ throughout the dance.

One can easily spot Aishwarya’s daughter as she confidently performs the adorable routine. Holding a bright pink stick, she leads the others through the moves.

Towards the end, all the young dancers run off stage except her. Aaradhya places herself at the centre and dances as the singers move forward on the stage.

The scene finishes as the six-year-old leaves, with the older children finishing their harmonious rendition. With this spectacular footage, it appears Aaradhya is destined for great stardom, just like her mother!

Meanwhile, Aishwarya and Abhishek looked on as proud parents, clapping for their daughter after the scene.

They weren’t only the Bachchan family members attending. They were joined by many others, including Aaradhya’s grandmother Jaya. Amitabh missed the occasion due to filming scenes for Thugs of Hindostan.

However, he shared images of the famous family on social media. As a devoted grandfather, we’re sure Amitabh felt gutted to miss out on this special moment for the six-year-old.

Aaradhya’s annual day stage performance time … and its a sell out with the family in attendance.. except Dada ji .. who is in Thailand for TOH shoot

While Aaradhya stole the show, Aishwarya turned heads with her glamorous outfit for the occasion.

She wore a monochrome, polka dot-styled dress, styled with flowing sleeves. With her luscious hair looking sleek and straight, she added a splash of colour by donning a red lip. 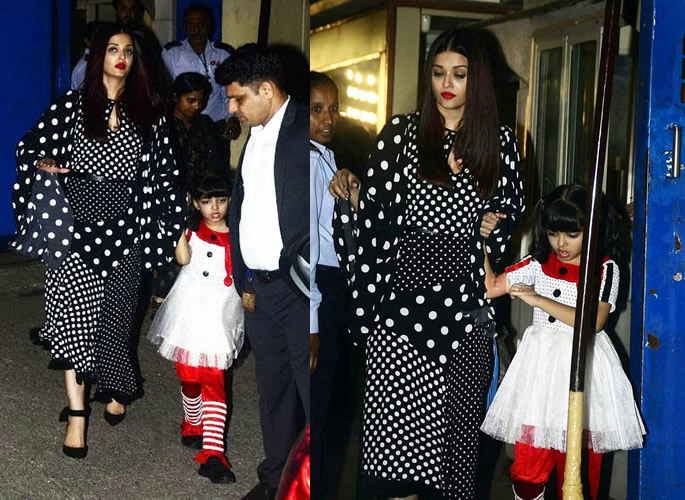 Shahrukh Khan also attended the show as his youngest son AbRam has recently joined the school. The Bollywood icon was joined by his 17-year-old daughter Suhana and son Aryan to watch the performance.

He enjoyed the day’s festivities and said on social media: “Spectacular DAIS Annual Day. God Bless you Nita Ambani for loving the kids. Made me nostalgic when to act was not important just trying was..”

With the event now over, we may have to wait sometime before we see little Aaradhya perform on the stage again.

However, judging by her amazing skills, we reckon she’ll carve a successful Bollywood career when she does indeed make her debut!