Steven Spielberg made a two-day historic trip to India to share the success of Oscar-winning film ‘Lincoln,’ with Indian partners Reliance Entertainment.

“We in the U.S. need to do more to be exposed to other cultures.”

Spielberg, one of the greatest film makers of our time was greeted by industrialists Anil Ambani and Tina Ambani. Megastar Amitabh Bachchan, who was in Bhopal for Prakash Jha’s Satyagraha [2013], flew down to meet the ace director.

While getting ready to meet the legendary film maker, Big B had tweeted: “And tomorrow meeting up with Steven Spielberg, and moderating a conversation with him, at an event for select fraternity!”

The Ambanis and Jaya Bachchan played host to a perfect master class with Steven Spielberg at Taj Lands End, Bandra, Mumbai. The highlight of this event was Bachchan’s rendezvous with Spielberg. Bachchan moderated a lively 90-minute Q&A session in front of an exclusive audience, consisting of Indian businessmen, director’s and film personalities. 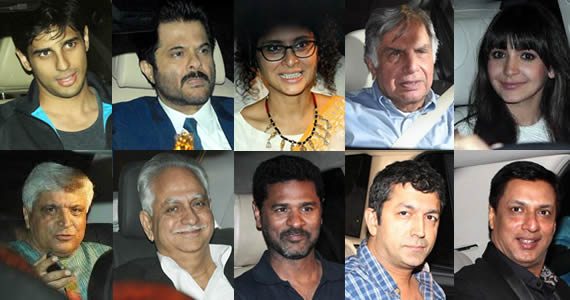 While talking to Big B, Spielberg spoke of his experiences in India. Spielberg made his first trip to India in 1977 to shoot a sequence for the film Close Encounters of the Third Kind.

In 1983 he returned to India for location scouting for his movie Indiana Jones and the Temple of Doom [1983]. The film starred several Indian actors, including Amrish Puri [Late], Roshan Seth and Raj Singh. Amrish Puri’s evil role as ‘Mola Ram’ became very popular amongst South Asian audiences. On this very same trip, Spielberg went backpacking across India, visiting cities such as Benares, Delhi and Calcutta. 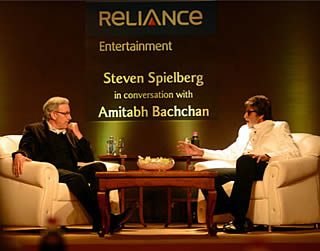 When Big B asked him about his impressions of India, he replied saying: “What I really remember is the warmth of the people here – they would just invite me to their homes even without knowing me.”

Spielberg admitted that he had seen very few Bollywood films; he mentioned watching Raj Kapoor’s Awara [1951] and 3 idiots [2009]. Spielberg added, “We in the U.S. need to do more to be exposed to other cultures.”

Spielberg in conversation with Bollywood directors shared many ideas and opinions on film making. The fulfilling evening finished with a group photo, featuring Spielberg and Bollywood’s selected fraternity.

Madhur Bhandarkar, a National award-wining director talking after the event said: “It was great interacting with Steven Spielberg. Most of the directors from Bollywood were present.”

“Amit Ji (Amitabh) held a very nice conversation with him. People of the industry asked several questions. I always say Steven Spielberg is the god of cinema and today after meeting and talking to him, the entire industry is elated,” added Bhandarkar.

Director Ashutosh Gowariker, also present at the event said: “I think it was brilliant to hear Mr. Spielberg speak. I think he was very generous in his sharing of information. It was great to see the most prolific filmmaker of our time.”

Watch the full conversation between the two legends, talking more in depth about the ‘future of cinema’ and collaboration between Hollywood and Bollywood:

Spielberg was also interviewed by Shekhar Gupta on NDTV’s programme Walk the Talk. While speaking to Gupta, Spielberg mentioned his desire to make a universal film with an Indian director and Indian scriptwriter.

“The experiment I’d like to conduct someday is to take an American movie and remake that film in India. Take that same story and remake that story with an Indian director and an Indian screenwriter to make the necessary adaptation,” said Spielberg.

Spielberg has also plans to produce a film on Kashmir. Talking to the Times of India he said the film will go on the floors, once everything is in place.

“We have finalised a script… Part of it will take place on the India-Pakistan border in Kashmir. But we’re still trying to figure out the castings, locations and who’s going to direct it,” said the 66-year-old director.

Anil and Tina Ambani threw a lavish party in honour of Spielberg at their Cuff Parade residence in South Mumbai on 12th March 2013. Stars from Bollywood and the business world came together to celebrate the man with the Midas touch.

The three big Khans of Bollywood – Aaamir, Salman and Shahrukh were unable to attend due to work commitments. Following his brief visit to India, Spielberg returns to USA with fresh ideas to think about.

Faisal has creative experience in the fusion of media and communication and research which increase awareness of global issues in post-conflict, emerging and democratic societies. His life motto is: "persevere, for success is near..."
Aishwarya adores Aaradhya Bachchan
Sheryln Chopra in Kamasutra 3D