Mumbai Indians beat Rajasthan Royals by thirty-three runs to win the 2013 Champions League T20 final. Sachin Tendulkar and Rahul Dravid received a standing ovation in what was their last match in T20 cricket and coloured clothing.

“Sachin and Dravid in their own ways have been real role models for all the young boys.”

Mumbai Indians have been crowned winners of the Champions League T20 [CLT20] after beating Rajasthan Royals by thirty-three runs in the final at Delhi’s Feroz Shah Kotla Stadium on 8 October 2013.

With this victory, Mumbai Indians have now done the double of the Indian Premier League and CLT20.

This was a memorable clash as two of India’s best-known players, Sachin Tendulkar and Rahul Dravid played their final T20 game, with the latter bowing out from professional cricket. 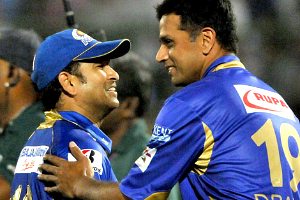 Their last hurrah was celebrated by both teams irrespective of who won.

Paying tribute to the two epic cricketers an Indian cricket fan said: “Sachin and Dravid in their own ways have been real role models for all the young boys.”

The Champions League T20 final between Mumbai Indians versus Rajasthan Royals was fittingly significant to the occasion, with close to four hundred runs scored in a competitive contest.

Coming into the final, Dwayne Smith had scores of sixty-three not out, forty-eight and fifty-nine for Mumbai Indians in his previous three games. The West Indian was once again leading the charge at the top of the order as he gave Mumbai a briskly start.

Mumbai’s Sachin Tendulkar gave his fans a final glimpse of some vintage cricket. However after two consecutive fours, Sachin [15] was out [cleaned bowled by Shane Watson] for the very last time in the shortest format of the game.

Smith though answered back with a hat-trick of boundaries. Leg-spinner Pravin Tambe proved to be the pick of the bowlers for Rajasthan, as he first bowled out Smith for a thirty-nine ball forty-four [5 4s, 1 6s]. 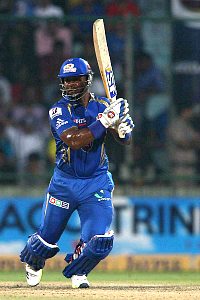 Then the forty-two-year old from Maharashtra knocked out Ambati Rayudu after scoring twenty-nine runs off twenty-four balls.

Mumbai though was still sailing nicely at close to eight runs per over and that’s when captain Rohit Sharma made his team accelerate, smashing thirty-three off fourteen balls. Handy contributions from Sharma and Glenn Maxwell ensured the runs kept flowing throughout the innings.

Eighteen-year-old Sanju Samson gave Rajasthan a real push with a blistering start. He along with anchor man Ajinkya Rahane shared a 109 runs stand and had the Royals cruising towards victory.

With Rahane notching up his forth-consecutive fifty, Rajasthan was still vey much in the game as eighty runs were required off forty-four balls. 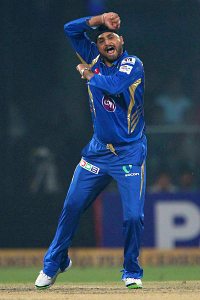 Harbhajan claimed three wickets in just one over, finishing with figures of 4-32.

Captain Dravid shuffled the batting order as he came in at number eight, but the strategy did not work with his last T20 innings ending on one.

Rajasthan Royals lost their last seven wickets in the space of just fourteen runs to hand Mumbai Indians a thirty-three run win – The IPL champions also becoming the victors of the 2013 Champions League.

Mumbai’s 202-6 was their highest innings total in the CLT20, surpassing the 184-4 they made against Guyana at Durban in September 2010.

Rahane with 288 runs in six matches was the leading scorer of the 2013 CLT20. He also became the first batsman to register four 50’s in the CLT20 this season.

“Oh fantastic, this is our third silverware. We won Champions League two years ago, so it just feels superb.”

“Today was quite emotional for all of us. I think we wanted to send off Sachin on a high and I think we’ve managed to do that. Rohit has been a superb captain for us,” she added.

This was the last game cricket fans across the globe saw Sachin Tendulkar and Rahul Dravid taking to the field in a T20 International and coloured clothing.

The occasion seemed to overshadow the importance of the Champions League T20 final, with a special focus on the two legends of Indian cricket.

Though the two players did not set the stage alight during the final, but their spirit reflected through the stadium.

“I remember Rahul being part of Wills Trophy team and I was his captain, but we played in whites,” said Sachin. 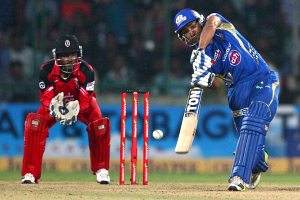 “He’s either my age or younger than me by a couple of months. He’s actually seven years senior to me as a cricketer. You know when I came into the team, in my third test match Sachin was captain of India,” said Dravid.

It was a perfect farewell for Tendulkar as Mumbai Indians became the first side to win the CLT20 for the second time. They won the trophy previously in 2011 when they defeated Royal Challengers Bangalore by thirty-one runs in Chennai.

While Sachin may still be playing Test Cricket for India, many of his fans will miss the Little Master in limited overs cricket.

The sentiment around the cricketing world appeared to have been portrayed by Rohit Sharma:

“You know there was a great build up to the game, even though we knew two of the legends of Indian cricket, will, we won’t see them anymore in coloured clothing. So I would like to thank them for whatever they’ve done for Indian Cricket.”

DESIblitz congratulates Mumbai Indians on achieving the T20 cricket double and also wishes Sachin Tendulkar and Rahul Dravid all the best for the future.

Faisal has creative experience in the fusion of media and communication and research which increase awareness of global issues in post-conflict, emerging and democratic societies. His life motto is: "persevere, for success is near..."
Premier League Football 2013/2014 Week 7
The Asian Football Awards 2013 Winners