Hyderabad Hotshots beat Awadhe Warriors 3-1 to win the 1st edition of the Indian Badminton League [IBL]. Saina Nehwal defeated PV Sindhu for the second time in the competition during the final played at the Sardar Patel Stadium, Mumbai.

"[PV] Sindhu played really well and gave her best but I managed to outwit her.”

Hyderabad’s icon player Saina Nehwal [IND] who remained unbeaten in the tournament won the mouthy clash against PV Sindhu [IND] 21-15, 21-7, in front of a star studded capacity crowd at the Sardar Patel Stadium in Mumbai, India on 31 August 2013.

The best of five matches final began with the Men’s final, contested by Awadhe’s K Srikanth [IND] and Hyderabad’s S Tanognsak [THA], a twenty-year-old being labelled as a future star. Srikanth went head to head against Tanongsak who so far had been unbeaten in the league and many predicted this going only one way. 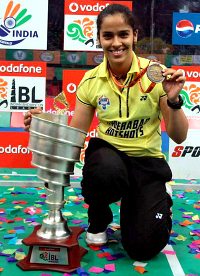 The pace in the first game was decided by Srikanth who took an early 7-5 lead going into the break, and then continued playing some exceptional shots to maintain his 14-10 lead.

Srikanth was using his smashes to great effect and completely outsmarted his opponent on the net. Srikanth went onto take the first game 21-12.

Srikanth went into game two, with high confidence and took an early 14-8 lead. Tanongsak was clearly under pressure and needed to win this game to stay in the match. The Thai player put on a brave show as he slowly clawed his way back to 17-17 by playing some powerful shots.

Both players were now playing fantastic shots. Tanongsak took the lead 19-18 for the first time in the game but it was short lived as Srikanth powerfully smashed his way to level the score before going on to win the game 21-20. Thus Tanongsak lost his first match in the league, putting the Awadhe Warriors 1-0 up in the final.

Speaking after the match, Srikanth said: “The beginning was tough but after the first interval I was able to increase the points gap. This gave me the confidence to play my game. I remained focus and even though Tanongsak gave me a great fight in the second game, the match went in our favour.” 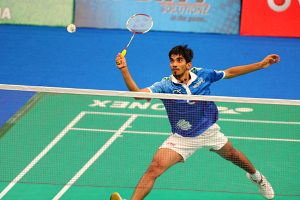 This led onto the much-anticipated Women’s final [Match 2], featuring two of India’s finest players: Saina Nehwal [Hyderabad Hotshots] and P.V. Sindhu [Awadhe Warriors]. Nehwal started with a smash and Sindhu responded like for like.

Going into the break, Nehwal took a 7-3 lead. After a breather Sindhu made a comeback and pulled it back to 7-8 before an aggressive Nehwal took a 14-9 lead into the second break. Sindhu seemed a little anxious yet still took the first three points making it 12-14. But Nehwal once again got the upper hand and eventually took the first game 21-15.

Moving into the second game, there was a lot of pressure on the shoulders of Sindhu. She started off with a few unforced errors which cost her three crucial points and went into the first break trailing, 1-7.

Sindhu continued playing poorly, as Nehwal extended her lead to 14-6, going into the second break. Playing some brilliant cross-court drop shots, Nehwal wrapped up the second game 21-7 and won the match 2-0. The final was now evenly poised at 1-1. 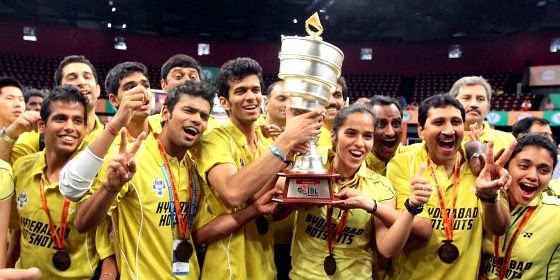 After the match, Olympic Bronze medallist Nehwal said: “I would like to thank my fans who have supported me all through. Sindhu played really well and gave her best but I managed to outwit her.”

“I have been really lucky during the entire league that I won all my matches. I am happy to have won this match and hope my team win the league,” she added.

Match 3 was a Men’s Doubles contest featuring Mathias Boe [DEN] and Markis Kido [INA] of Awadhe Warriors vs. V Shem Goh [MAS] and Khim Wah Lim [MAS] of Hyderabad Hotshots. Boe and Kido went into this match as clear favourites but it was the underdogs who unexpectedly caused a big upset winning 21-12, 13-21, 11-4, which later proved to be the turning point in the final: 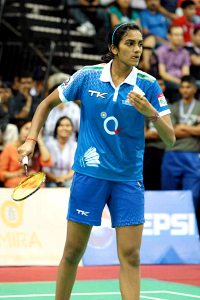 “The first game was smooth. In the second game, Boe and Kido tried to be in the front all the time and both of us had to fasten our movements. We maintained our calm in the third game and the swift shots helped us win the match,” said Goh and Lim.

The next match was a must win for Awadhe if they were to have any chance of winning the tournament and take the the final into a decider.

Match 4 was between two Indian players who had lit up the tournament: Ajay Jayaram [Hyderabad] vs. Guru Sai Dutt [Awadhe]. Dutt was unwell going into the game against favourite Jayaram, but he gave a good account of himself and stunned the crowd by taking the first game 21-10.

Dutt dominated most of the second game, but Jayaram pulled himself together and took the second 17-21 after recovering from 12-16 at one point. 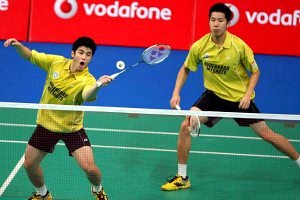 The first editition of the IBL has been a huge success. The player of the tournament Saina Nehwal said:

“Nobody expected it to be so successful because everyone was comparing it with the IPL, which is actually not right at this point of time and we’re trying to make it big. But this of course is not going to be so easy, I’m sure in the coming years, it will definitely catch up with the IPL.”

What many thought would be just a money spinning spectacle has actually provided some great badminton, showcasing some future stars in the making.

We look forward to 2014 when Hyderabad Hotshots will try to retain their well-deserved Indian Badminton League title.