Ranchi Rhinos won the 2013 Hockey India League after beating Delhi Waveriders by two goals to one at the Astroturf Hockey Stadium on 10th February 2013.

Ranchi Rhinos came from behind to beat Delhi Waveriders 2-1 and win the inaugural Hockey India League title. The Rhinos were trailing for majority of the match after New Zealand’s Simon Child opened the scoring to give Delhi a 1-0 lead. However Ranchi fought tremendously well to score two goals inside the last quarter to seal a thrilling victory against the odds.

The final between Ranchi Rhinos and Delhi Waveriders was played at the Astroturf Hockey Stadium in Ranchi, India on 10th February 2013. The atmosphere in the ground was simply electrifying and musical. The five thousand capacity ground was filled with spectators, with an extra three thousand people watching from rooftops close by.

It was expected to be a close encounter between the two best sides of the tournament. On this occasion it was a dream finish for Ranchi to win in front of a capacity home crowd. 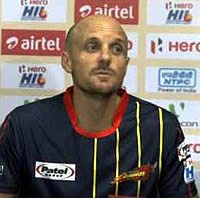 Led by head coach Gregg Clark, the former South African International stated he was not very confident, following the initial auction of the league. However with time he became much more positive and was ready for the challenge. He said:

“When I saw the Team List after the Hero HIL Auction, I was not very hopeful. But the franchise and Indian officials gave me the confidence about the team. After reaching Ranchi and seeing these players, I really got the confidence and see, today we are the Champions.”

Rhinos went into the final match with their tried and tested team, which included a 3-2-2 formation. Similarly the Waveriders stuck to a 4-4-2 formation, which proved to be a winning combination throughout their campaign. 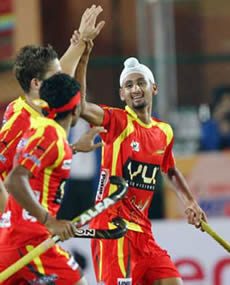 Rhinos, who had lost their last three matches against their opponents, were determined to stop the wave from Delhi by keeping their strikers at bay. Leader of the opposition, Arun Jaitley greeted all the players before the start of the match.

Delhi Waveriders started the game more confidently with some early penetration in the D zone. The game was played at a good pace as both teams wanted to score first to take an early advantage.

Rhinos forward Mandeep Singh found enough space to try and make something happen, but Rupinder Pal Singh from the Waveriders matched his skills with some excellent defending. Rupinder with his anticipation, height and long reach had tackled well throughout the tournament.

At the end of the first quarter the match was scoreless. The second quarter began in similar fashion, with the game being played at an incredible pace. The match was a battle of the midfielders, especially between captains Sardar Singh [Delhi Waveriders] and Moritz Fürste [Ranchi Rhinos].

Delhi’s Simon Child got the party going in the 25th minute, as he scored the first goal of the match. After receiving a mistimed ball from striking partner Matthew Gohdes [Australian], Child hit a blinder, which raced past goalkeeper Francisco Cortés. This was Child’s fifth goal in the tournament. 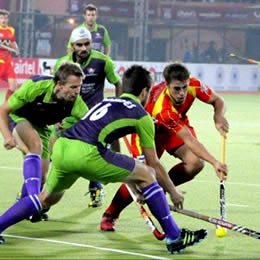 At this point of time, Ranchi were not pushing enough players forward and failed to spread the ball to the flanks in order to trouble Delhi.

Leading into the final quarter, Delhi were certainly not rushing, however Ranchi who were chasing the game had up the tempo. Following persistent pressure from the Rhinos, it was third time lucky as the home team finally scored off a penalty corner which was executed very well. In the 55th minute Austin Smith hit a beautiful ground flick past goalie Nicolas Jacobi to level the scores.

In the 63rd minute Ranchi earned another penalty corner, which turned the tide in Rhinos favour. A deflection from Ashley Jackson [England] fell to team mate Manpreet Singh who struck the ball in the far post corner to give Rhinos a 2-1 lead. Goalkeeper Nicolas Jacobi who had a great tournament was clearly out of position.

With very little time left and in search of an equaliser, Delhi were unable to break the Ranchi defence. Thus Ranchi Rhinos were crowned champions of the 2013 Hockey India League. The huge crowd was delighted to witness a ripple of a match, which finished with the home team winning the tournament.

Players from Ranchi enjoyed the victory with their trademark Rhino Salute. Manpreet Singh who scored his 2nd goal of the tournament said: “It makes me feel very happy to score the winning goal today.”

It was a double celebration for Ranchi Rhinos as they lifted two shiny trophies, one for winning the tournament and the other for Fair Play. 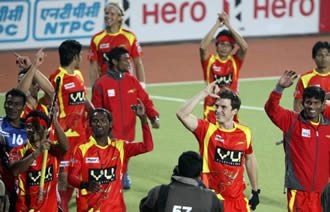 “I never thought in the beginning of the Hero HIL that we will play in the Final and win the match.  I am very happy today and thankful to Ranchi crowd for being very supportive to us.”

What a tournament Mandeep Singh has had, it’s been a life changing experience for him. Mandeep, a future talent of Indian Hockey scored ten goals in the tournament.

“We played extremely well today and this was our best game. We defended and contested well today. Goalkeeper Francisco Cortes performed brilliantly today and his saves gave us the victory. We played much better than our previous matches against Delhi Waveriders.”

With the end of a very successful tournament, the sport of Hockey proved to be a winner. The 2013 Hockey India League has won the hearts of many people not only in India, but worldwide too. This tournament is here to stay for many years to come. And we look forward to next year’s tournament, which can only get better.

Faisal has creative experience in the fusion of media and communication and research which increase awareness of global issues in post-conflict, emerging and democratic societies. His life motto is: "persevere, for success is near..."
IPL 2013 Auction Results
Farah Khan a Choreographer for IPL 2013