Farah Khan a Choreographer for IPL 2013

The 2013 IPL gets a touch of Bollywood with choreographer Farah Khan getting fans in the dancing mood with unique moves especially for the tournament.

" I am happy to have contributed my bit to the game and to the tournament."

Farah Khan the Bollywood film director, actress and choreographer has been putting together some signature dance moves for the 2013 Indian Premier League (IPL) cricket tournament.

The moves are part of a marketing campaign by Sony MAX, the exclusive broadcaster of the Indian Premier League. The campaign is called ‘Sirf Dekhneka Nahi’ and aims to get everyone involved in the cricket tournament by encouraging them to get up and celebrate and dance.

MAX’s campaign features Farah requesting viewers to let go of their inhibitions and groove to the fun and tune of the Pepsi IPL 2013 in support of their favourite teams. This is the first time choreography of this kind is being done for a tournament like the IPL. 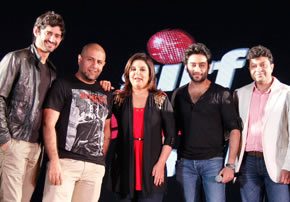 The music for the campaign has been composed and produced by Bollywood music duo Vishal-Shekhar. Reacting to the tune made for the IPL, Farah said: “Wah wah, Annu Malik bhi aisa rhyme nahi kar sakta! (Even Anu Malik can’t rhyme as good as this!) Champak champak thapak thapak gili gili, yeah!” She giggled as she took a potshot her music director friend Anu Malik.

Farah features in a quirky and fun promo videos for the 2013 IPL theme tune performing the moves and wants fans of the IPL 6 to copy them during the tournament. After losing lots of weight, Farah shows with confidence how to do three distinct steps during an IPL match when a player hits a four, a six, and when a wicket is taken.

Farah has high hopes for the moves and said: “I will make everyone dance this year. Yeh mariyal reh ke kya game dekhne ka? (Why watch the game in a sombre mood?) I will make all cricketers dance. I am happy to have contributed my bit to the game and to the tournament followed by millions with incredible passion.” 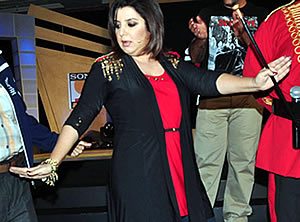 When a player from the opposing side gets out, Farah’s has created a crazy move to celebrate the occasion. Talking about it Farah said jokingly: “Show the first finger just the way umpires do it and move your booty. But be careful and make sure that you don’t flash your middle finger instead, otherwise the step can become controversial and it can land you into trouble.”

When asked if the umpires might join in? Farah said humorously: “That can happen – who knows! Baat karni padegi unse bhi. Sikhana padega unko mere naye signs. (I have to talk to the umpires and teach them these new signs).”

The novelty of the moves is definitely something new, Farah is banking on the fans to repeat the moves at the matches. She acknowledges that even a little masti and ‘tapori’ will be needed during the steps.

“Thoda us mein tapori anaa jaroori hai (you have to add some tapori to it). You cannot be classy and do a classy step when people are going mad in the stadium and people are shouting.”

Here is one of the promo videos of Farah Khan’s moves for the 2013 Pepsi IPL:

Neeraj Vyas, the executive vice president and business head at Sony MAX, said: “A cricket crazy nation like ours needs to be more involved in the game then just being mere onlookers. Through the campaign ‘Sirf Dekhneka Nahi’ we want to encourage the audience to not just watch the Pepsi IPL but to participate and rejoice every moment of the game with adrenaline-charged dance moves choreographed by Farah and get hooked on to the game by actively participating throughout the season.” 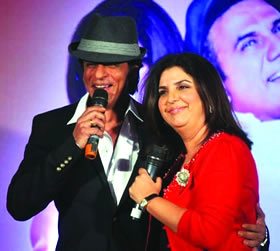 India’s Multi Screen Media COO NP Singh said that the idea behind the campaign is to raise the engagement level around the IPL by engaging cricket fans through various touch-points like television, radio, print, digital and outdoor. “It became a passive viewing habit, so we wanted to increase the level of participation among the viewers. Therefore the campaign theme ‘Sirf Dekhneka Nahi.’ The same theme will be used across all our marketing campaign whether it is print, outdoor or digital,” said Singh.

Farah Khan, aged, 48, hopes that her actor friend Shahrukh Khan, the co-owner of Kolkata Knight Riders (KKR), will be dancing her moves in the stadiums.”I hope Shahrukh does these steps when his team hits a six or a four or takes a wicket. He has a sense of humour and I am sure he will enjoy it,” said the renowned Bollywood choreographer.

Farah will be participating in the IPL in as many ways as she can. For some of the matches she will also be going to the stadiums and will be encouraging everyone there to join in the dance moves.

The IPL this year will be simulcast on Max, which has been the home of IPL for the last year five years, and sports entertainment channel Six. The IPL will be available on a High Definition (HD) feed in English and a Standard Definition feed in Hindi on Six and a SD feed on Max.