"Captaincy was a good challenge and it's been a great experience and a learning curve."

Players from both sides assembled inside the ground in front of a packed crowd, which was primarily neutral in support. Mumbai Indians star batsman, Sachin Tendulkar was forced to sit out due to a hand injury.

In the build up to the match, the pressure was certainly on the glamorous Mumbai franchise, as they had not won the tournament before. For the Super Kings this was their 5th final in 6 editions of the IPL.

On a humid evening the captains along with match referee Ranjan Madugalle went out for the toss. The Mumbai Indians captain, Rohit Sharma won the toss and elected to bat first. The decision was a correct one, as the pitch was predicted to become slower. Hence the pitch was dry and going to become more difficult for the team batting second.

Both teams were unchanged for the final, as there were no surprises in the two batting line-ups. Simon Taufel [Australia] and Kumar Dharmasena  [Sri Lanka] were the two umpires for the match.

Mohit Sharma of the Chennai Super Kings gave the perfect start for the two times champions as he dismissed Dwayne Smith plumb in front of the wicket for only four runs. Albie Morkel increased Mumbai’s misery as he bowled out Aditya Tare for a golden duck, with a beautiful yorker to leave the Indians on 8-2. 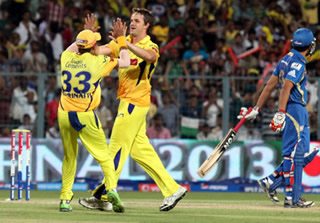 Then came the big wicket of Rohit Sharma who was dismissed for just two runs. Mumbai were now staring down the barrel on 16-3.

While Ambati Rayudu showed some promise, wickets kept tumbling at the other end. Dinesh Karthik was bowled out for 21 runs with a delivery, which slightly came into him. Karthik’s hard work was undone when he dragged the ball onto his stumps, leaving the Mumbai Indians reeling on 52-4.

Kieron Pollard then kick started the rescue after some big blustery shots. And his partner in crime was Harbhajan Singh who smashed three boundaries off a Dwayne Bravo over. Singh’s [14] cameo was cut short, as Bravo became the first bowler to take over 30 wickets in an IPL season.

The finishing touches were given by Pollard, hitting two huge sixes off the last two deliveries of their innings. His 32 ball sixty ensured Mumbai Indians posted a decent 148-9 in their allotted twenty overs. Pollard’s wonderful innings consisted of seven 4s and three 6s.

At the end of their innings a spirited Pollard said: “We have to play well, field well and put the ball in the right place. We have put a [competitive] score on the board.”

Much was expected from Lasith Malinga and he delivered right at the start of the Super Kings innings. He bowled a beautiful yorker to Michael Hussey, sending him back to the hut for just 1 run. The star bowler from Sri Lanka then hit Chennai with a double blow.

The very next delivery saw Suresh Raina walk back to the pavilion for a golden duck. Malinga bowled an excellent short delivery to Raina, who was caught by Dwayne Smith at square leg. As Raina struggles with the short delivery this was great planning and execution from Malinga. 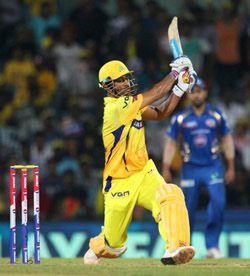 The men in blue could not have asked for a better start as the third wicket came in the form of Subramaniam Badrinath. Mumbai Indians were on fire as Badrinath edged to the wicket keeper off Mitchell Johnson’s bowling. He was out on naught, leaving Chennai Super Kings 3-3.

The smile on Saina Nehwal’s [Indian badminton player] face suggested she was rooting for the Mumbai Indians. Rajiv Shukla, Chairman of the IPL, was also present in the ground.

The fall of wickets continued as Bravo [15] and Ravindra Jadeja [0] were sent packing in quick succession. Johnson ended the innings of Murali Vijay on 18, as Chennai were in all sorts of trouble at 39-6.

Chennai Super Kings captain MS Dhoni was now playing for a miracle, as he was trying to achieve the impossible. The asking rate now had rocketed to 14+ runs per over.  With the equation now boiled down to 42 runs off the last over, Super Kings could only manage a total of 125-9. Thus the Mumbai Indians won their maiden title by 23 runs. The pick of the bowlers were Malinga, Johnson and Singh who all claimed two wickets each. 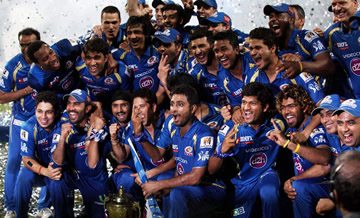 Talking to the media, Rohit Sharma said leading his side to victory was a challenge he relished.

“Captaincy was a good challenge and it’s been a great experience and a learning curve. We knew we haven’t won the title for the last five years but this time we were very determined, credit goes to all the players and staff involved,” he said.

Kieron Pollard who was adjudged the man of the match said: “I thank my family and the crowd for backing us. I have to try and take responsibility and it came off today.” 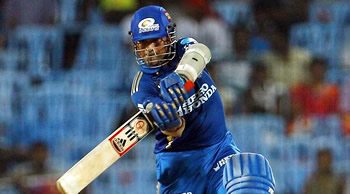 Also at the end of the match, Sachin Tendulkar announced his retirement from the IPL. “This is the right time to stop playing IPL,” Tendulkar said. “I am 40. I have to accept the reality. I had decided that this would be my last season. It has ended perfectly.”

The latest spot fixing revelations during the IPL have undoubtedly cast a shadow of doubt on what has been a fantastic tournament otherwise. Highlights of the tournament include Chris Gayle’s magical 175 and the excellent catching throughout the tournament.

Millions of viewers around world love their cricket and deserve to witness fair and transparent matches. It is time for players and senior management to stand up and fight against this menace, which continues to affect the game.

Mumbai Indians are the champions of the 2013 IPL and a well deserved win it was.

Faisal has creative experience in the fusion of media and communication and research which increase awareness of global issues in post-conflict, emerging and democratic societies. His life motto is: "persevere, for success is near..."
Ziyad Rahim breaks Guinness World Record
Sachin Tendulkar says Good Bye to IPL